Every planet has Zodiac signs that they are more and less “comfortable in”. For the planet Venus, which is associated with things one values like love and money, the sign of Aries is not its favorite place to be.

Venus in Aries is therefore referred to as Venus in detriment. If Venus was in Aries on the day you were born, though, you just have to find someone who appreciates your unique style.

If you have Venus in Aries, your best compatibility matches are partners who have Venus in Gemini or Venus in Aquarius. Looking at the characteristics of the sign of Aries reveals additional possibilities.

Venus stays within two signs of the Sun in terms of relative position to Earth. That means people who have Venus in Aries can have the Sun in only the following signs: Aquarius, Pisces, Aries, Taurus, or Gemini.

Best Match: Venus in Aries with partner’s Venus in Gemini or Aquarius

Gemini and Aquarius are the air signs closest to fire sign Aries. The four elements – fire, earth, air, and water – typically break down into two groups of two: fire and air, and earth and water. Older astrology texts often refer to fire and air signs as masculine and water and earth signs as feminine.

In today’s world where people of all genders are able to express a broader variety of roles and traits, perhaps a better way to understand the difference between the two groups of signs is to look at their focus. Water and earth signs tend to be interested in security and in maintaining the structure that exists.

This can include the domestic stay-at-home parent, but it can also include the sort of person who looks for a job that is stable and guaranteed. No matter what happens in the world, industries like education, healthcare, food, and banking aren’t going anywhere. Those lines of work are therefore full of earth and water sign people of all genders.

Venus in Gemini comes up with many ideas, but Venus in Aries gets bored with sitting around talking and wants to do something.

This push toward action that Venus in Aries gives is good for Venus in Gemini. Finally making an idea concrete could inspire more ideas, and then the cycle would begin again!

While Venus in Gemini tends to come up with a lot of little ideas, Venus in Aquarius would be more likely to come up with fewer ideas that are so big that figuring out where to begin executing them would be hard for anyone other than Venus in Aries, who just starts doing stuff.

Venus in Aries has too short an attention span to come up with really big ideas of this sort independently, so the twosome of Venus in Aries and Venus in Aquarius is definitely greater than the sum of its parts.

The three fire signs are Aries, Leo, and Sagittarius. Fire signs tend to go out and make things happen.

Venus in Aries and Venus in Sagittarius have in common that they are both athletic. In Venus terms, they value their physical bodies. These two would enjoy sports or outdoor activities together.

The physical side of their love life would be strong too. With Venus in Aries being impulsive and Venus in Sagittarius being blunt, there would rarely be a quiet moment.

Venus in Leo could perhaps over time convince Venus in Aries to slow down a little and develop some of their brainstorms further.

Two Venus in Aries people together would either love or hate the experience. No one would be telling them to slow down and be more practical, so they could get in more trouble faster. Having a partner just as individualistic and independent as they were might be a jarring experience.

Third Best Match: Venus in Aries with partner’s Venus in other cardinal signs

Venus in Aries values individual freedom regardless of who gets hurt. As a result, Venus in Aries can be abrasive, which would trigger Venus in Cancer’s sensitivity incessantly.

The signs that have not been covered yet are Taurus, Virgo, Scorpio, and Pisces. Taurus and Virgo are earth signs, and Scorpio and Pisces are water signs.

Taurus and Pisces are the signs on either side of Aries. As noted previously, Venus can be no more than two signs apart from the Sun. There are therefore many Venus in Aries people with the Sun in Taurus or Pisces.

Venus in Aries tends to be emotionally awkward and therefore not good at relating to the emotional intensity of Venus in Pisces. For Venus in Aries, the cause of the awkwardness is a short attention span, so Venus in Aries would at least flit away from an uncomfortable situation quickly.

Venus in Aries and Venus in Taurus at least have in common that they both value feeling good and enjoying their physical bodies. Venus in Taurus prefers to sit still and relax in one place for a while, though.

These two would be able to scheme together to come up with a unique relationship that suited each person’s needs as well as possible.

Venus in Virgo is in fall, as it is the opposite of Pisces where Venus is exalted. What Venus in Aries therefore has in common with Venus in Virgo is that their way of expressing love does not fit common romantic stereotypes.

Like the situation between Venus in Aries and Venus in Scorpio, outsiders can bond strongly with other outsiders. Venus in Aries would still have impulsive tendencies that would drive the predictability-craving Venus in Virgo crazy, though. 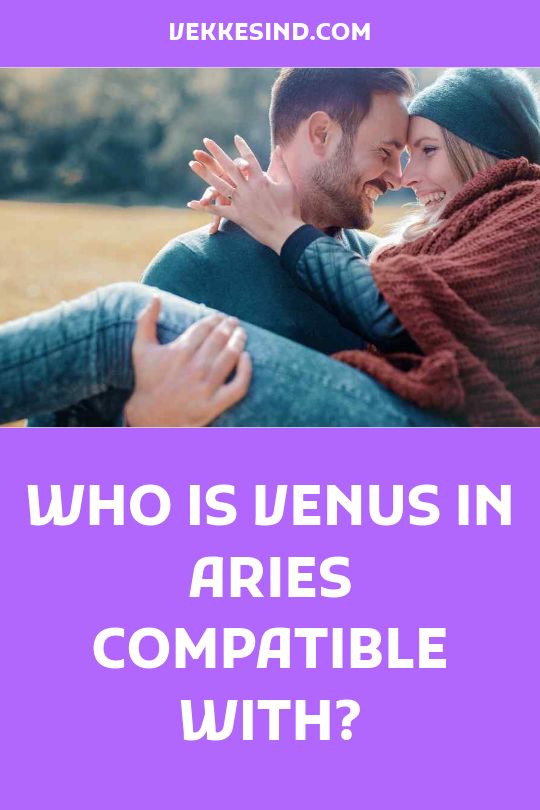 Who Is Venus in Pisces Compatible With? – Vekke Sind

Who Is Venus in Aquarius Compatible With? – Vekke Sind

What Does An Aries Man Like In A Woman? – Vekke Sind