One thing to consider when checking the astrological compatibility between two people is their Venus signs. The sign the planet Venus was in on the day a person was born speaks to what they value in life. Both love and money matters are therefore affected by Venus.

If you have Venus in Aquarius, your best compatibility matches are partners who have Venus in Sagittarius or Venus in Aries. Looking at the characteristics of the sign of Aquarius reveals additional possibilities.

Why Is Venus In Aquarius So Underrated?

When many people look for love, they might expect it to look a certain way. They may be counting on romantic dates that lead them, step by step, up a predictable relationship escalator to getting married and having kids.

People who have Venus in Aquarius sometimes do wind up getting married and having kids, but there is often much more to their story than that. Ruled by both conservative Saturn and rebellious Uranus, the sign of Aquarius is a complicated place for Venus, the planet of love.

Venus in Aquarius is underrated because its main goal is not having the best romantic relationship possible for oneself alone. Instead, Venus in Aquarius wants to improve how society does love. Whether or not they achieve this, the journey is at least interesting for people with Venus in Aquarius.

Venus Basics: Which Sun signs can have Venus in Aquarius?

Venus stays within two signs of the Sun in terms of relative position to Earth. That means people who have Venus in Aquarius can have the Sun in only the following signs: Sagittarius, Capricorn, Aquarius, Pisces, or Aries.

A person with both the Sun and Venus in Aquarius has a double dose of their Zodiac sign’s capacity for innovation. They may be full of exciting ideas, though sitting down and carrying them out might be another story. What they are most likely to do is always their own thing.

The Sun in fire signs like Sagittarius and Aries likes to take action. Venus in Aquarius with the Sun in Sagittarius or Aries therefore has the potential to take inspired action toward a calling that benefits society in some way.

The sign of Aquarius is ruled by two planets that pull in opposite directions: conservative Saturn and rebellious Uranus. It is important to note that neither Saturn nor Uranus is neatly tied to any one political party. Instead, Saturn advocates maintaining whatever the established power structure might be in a given context, and Uranus advocates rebelling against whoever is in charge.

People with prominent Aquarius placements are therefore found at both extremes of the political spectrum. What they all have in common is a passion for promoting their vision of how society at large could be better off.

People who have Venus in Aquarius value the idea of making the world a better place, and they can be stubborn about their idea of how this should happen. They may borrow, on their own terms, from time-honored traditions, but they often add plenty of creative twists of their own.

Venus in Aquarius in Love

People with Venus in Aquarius are sometimes stereotyped as always pushing the limits of sexual freedom. This can be true in some cases, and it is interesting to wonder in those cases whether they were drawn to whatever taboo they broke for its own sake or simply because they were told they shouldn’t do it.

More commonly, however, people with Venus in Aquarius find themselves trying to balance the interests of both Saturn and Uranus. Some are very drawn to traditional structures for relationships, though they might go about it in a way that reforms those structures or otherwise draws attention to themselves.

However someone with Venus in Aquarius handles the challenge of balancing traditional and innovative attitudes toward love, the common outcome is always that they do it on their own terms. They are therefore looking for a partner who will always honor their intense need for freedom.

The Venus in Aquarius man loves to spew his philosophy of how the world should be run. He tends to value intellectual purity more than what actually works practically. He can be arrogant in this regard, but people put up with him because he is a loyal and entertaining friend.

The Venus in Aquarius man is often more cerebral than physical. Dealing with messy human bodies and emotions can challenge him, but he may think there is nothing technology cannot fix!

The Venus in Aquarius woman really does care about making the world a better place, and her creative ideas will certainly make your life more exciting when she is in it. She is also very devoted to her friends, so, as the Spice Girls might say, if you wanna be her lover, you gotta get with her friends.

Who is Venus in Aquarius compatible with?

One thing to consider when checking the astrological compatibility between two people is their Venus signs. The sign the planet Venus was in on the day a person was born speaks to what they value in life. Both love and money matters are therefore affected by Venus.

If you have Venus in Aquarius, your best compatibility matches are partners who have Venus in Sagittarius or Venus in Aries. They genuinely enjoy your creative ideas, and their passionate fire element is willing to take action to make your dreams reality.

To check Venus sign compatibility between yourself and a partner, use the synastry tool below.

Best Match: Venus in Aquarius with partner’s Venus in Sagittarius or Aries

Sagittarius and Aries are the fire signs closest to air sign Aquarius. The four elements – fire, earth, air, and water – typically break down into two groups of two: fire and air, and earth and water.

Older astrology texts often refer to fire and air signs as masculine and water and earth signs as feminine.

Venus in Aquarius therefore might come up with a plan like a couple celebrating Christmas separately so they can each do it exactly how they want in terms of which relatives to visit.

Venus in Aquarius and Venus in Aries would have a lot of fun together, though everyone else around them might be terrified.

Venus in Aries has too short an attention span to come up with really big ideas independently, while Venus in Aquarius comes up with ideas so big that figuring out where to begin executing them would be hard for anyone other than Venus in Aries, who just starts doing stuff.

The twosome of Venus in Aries and Venus in Aquarius is therefore greater than the sum of its parts.

The three air signs are Gemini, Libra, and Aquarius. All three tend to like the idea of things and prioritize intellectual connection in their romance.

A Venus in Gemini person who sees the good in the little things may help calm down someone with Venus in Aquarius who is on a tear about the world not living up to some lofty ideal.

Venus in Libra is getting the best of both worlds in this relationship – getting to be seen as the nice one and getting power they don’t feel capable of achieving on their own.

Third Best Match: Venus in Aquarius with partner’s Venus in other fixed signs

They both could go the route of conspiracy theorist or cult leader, though Venus in Scorpio’s cult would last longer because it would assume the worst rather than the best about human nature. Venus in Aquarius’s idealism, however, could be useful for getting Venus in Scorpio out of a dark rut.

The signs that have not been covered yet are Cancer, Virgo, Capricorn, and Pisces. Cancer and Pisces are water signs, and Virgo and Capricorn are earth signs.

Capricorn and Pisces are the signs on either side of Aquarius. As noted previously, Venus can be no more than two signs apart from the Sun. There are therefore many Venus in Aquarius people with the Sun in Capricorn or Pisces. 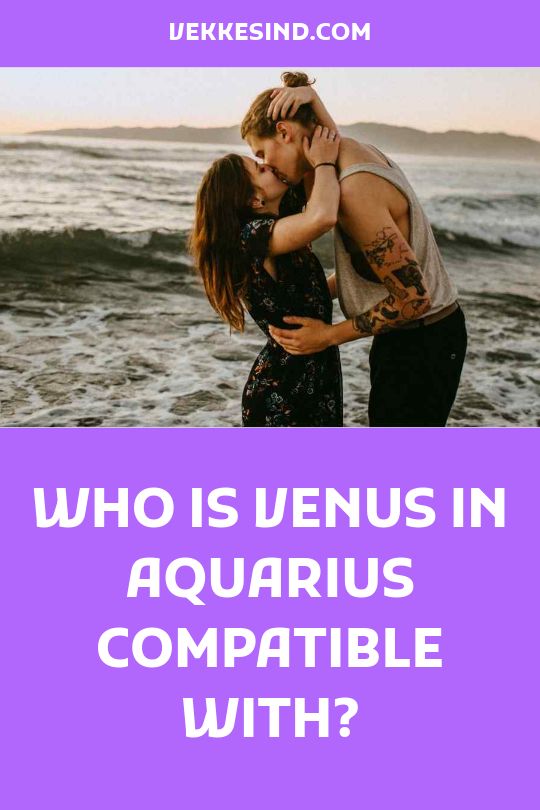 Who Is Venus in Sagittarius Compatible With? – Vekke Sind

Venus in Libra Compatibility, Why is Libra So Attractive? – Vekke Sind