A potent tool for assessing love compatibility in astrology is looking at Venus signs. The sign the planet Venus was in on the day you were born speaks to what you value in life. Both love and money matters are therefore affected by Venus.

If you have Venus in Capricorn, your best compatibility matches are partners who have Venus in Scorpio or Venus in Pisces. Looking at the characteristics of the sign of Capricorn reveals additional possibilities.

Why is Venus in Capricorn So Serious?

The sign of Venus in your astrological chart can show your approach to love and money, as it is associated with what you value in life. While Venus is broadly associated with sensual pleasure, the unique character of each Zodiac sign resonates more with some planets than with others, so Venus can be expressed very differently in a sign that calls for that.

The sign of Capricorn is ruled by stern Saturn, which is focused on responsibilities and duty. Venus in Capricorn, therefore, carries this heavy vibe into matters of the heart. People with Venus in Capricorn tend to be committed and concerned with meeting expectations in their relationships.

If you don’t know your Venus sign, look up your astrological chart for free with this tool:

Venus Basics: Which Sun signs can have Venus in Capricorn?

Venus stays within two signs of the Sun in terms of relative position to Earth. That means people who have Venus in Capricorn can have the Sun in only the following signs: Scorpio, Sagittarius, Capricorn, Aquarius, or Pisces.

A person with both the Sun and Venus in Capricorn would be very practical and serious. Their values would be in line with their basic personality, so they would not have a lot of internal conflict over, for instance, whether to work or to party. Work would, of course, get done first, but then they might have an earthy sense of fun afterwards.

For a person with their Sun in a passionate water sign like Scorpio or Pisces, Venus in Capricorn would be very grounding and help balance their emotional excesses. Someone with this combination could be intuitive yet practical, as well as very nurturing to their loved ones on multiple levels.

People with the Sun in Aquarius tend to be torn between their sign’s two ruling planets: conservative Saturn and rebellious Uranus. If they have Venus in Capricorn, however, they may be nudged more toward the conservative side.

People with Venus in Capricorn value tradition and achievement. They defer to the expertise of the recognized authority figures in their field, and they follow the established structure for professional advancement. They often hope to eventually become authority figures themselves in this way.

Those with Venus in Capricorn are often not innovators who will easily jump on the bandwagon of something new. They definitely favor the tried and true. They are, however, reliable people who honor their responsibilities to their colleagues, friends, and families.

Someone who has Venus in Capricorn is careful with money and capable of sticking to a budget. When it comes time for them to make a purchase, however, they look for a high quality item that will last a long time.

Venus in Capricorn in Love

Love for Venus in Capricorn people tends to compete with their intense professional ambitions. Some of them may believe it is not proper to mix business and romance, but dating a co-worker might be the only way a work-obsessed Venus in Capricorn person would see their partner on a regular basis. They at least have the solid boundaries necessary to make such an arrangement possible.

People with Venus in Capricorn value tradition and commitment in their relationships. Tradition helps them because it often consists of a pre-existing set of expectations for how relationships should go that they can just walk into without thinking too much about it.

If a Venus in Capricorn person wants a less traditional relationship, however, they will still insist that expectations be clear. They could handle polyamory on the condition they got to be in charge of the spreadsheet of who sleeps with whom on what night. This sort of thing would be more likely if the Venus in Capricorn person had the Sun or something else in Aquarius.

A more common quirk of Venus in Capricorn in love could involve unusual reasons for choosing a partner. They could choose a partner who has high social or professional status, hoping that this would increase their own status. Often a Venus in Capricorn person would be very happy as part of a power couple.

The Venus in Capricorn man may gravitate toward traditional gender roles, like thinking it is his job to achieve in the workplace while his partner takes care of things at home. Even if that isn’t entirely his style, it is still very important for him to know what is expected of him in his relationship.

Whatever the details may look like, the Venus in Capricorn man takes pride in fulfilling his responsibilities and being a good provider for his family. He may not be the most passionate guy, but he is reliable and stable.

The Venus in Capricorn woman acutely feels the pressure to live up to expectations, so she can take it harder than others that what society expects of her is not always consistent. For example, she is often drawn to achieve in the professional realm, but she may feel that some expect her to be more domestic.

On the home front, the Venus in Capricorn woman can be very efficient. She may not wear her emotions on her sleeve, but she excels at running a household that provides for the physical needs of her family. The hardest thing for her might be accepting help, as it is difficult for others to live up to her standards.

Who is Venus in Capricorn compatible with?

A potent tool for assessing love compatibility in astrology is looking at Venus signs. The sign the planet Venus was in on the day you were born speaks to what you value in life. Both love and money matters are therefore affected by Venus.

If you have Venus in Capricorn, your best compatibility matches are partners who have Venus in Scorpio or Venus in Pisces. While these water signs may find you a calming and containing presence, they broaden your perspective into the emotional side of life.

To check Venus sign compatibility between yourself and a partner, use the synastry tool below.

Best Match: Venus in Capricorn with partner’s Venus in Scorpio or Pisces

Scorpio and Pisces are the water signs closest to earth sign Capricorn. The four elements – fire, earth, air, and water – typically break down into two groups of two: fire and air, and earth and water. Older astrology texts often refer to fire and air signs as masculine and water and earth signs as feminine.

Venus in Scorpio will find this containment calming. As water tends to take the shape of its container, the water signs tend to look for containment in the people or circumstances around them.

Meanwhile, Venus in Scorpio will provide Venus in Capricorn with just enough excitement and color. These two are likely to share a dark sense of humor.

Two Venus in Capricorn people together would be practical and structured. Without having to constantly argue the correctness of their value system to a partner who was more laid-back, they could actually relax a little bit with each other. In private, they would definitely laugh together.

Third Best Match: Venus in Capricorn with partner Venus in other cardinal signs

All four of the cardinal signs mark the beginning of seasons. Fire sign Aries begins to spring, water sign Cancer begins summer, air sign Libra begins to fall, and earth sign Capricorn begins winter. Venus in any of these signs tends to express its element intensely.

Like all pairs of opposite signs, Venus in Cancer and Venus in Capricorn are dealing with similar issues. In their case, the common ground has to do with maintaining structures of society, which they both value.

As a couple, Venus in Cancer and Venus in Capricorn will be very traditional. They may, however, tangle over when to bend the rules if needed.

Venus in Aries, however, values the freedom to take off on a new path at a moment’s notice, throwing caution to the wind. This would drive Venus in Capricorn insane.

Sagittarius and Aquarius are the signs on either side of Capricorn. As noted previously, Venus can be no more than two signs apart from the Sun. There are therefore many Venus in Capricorn people with the Sun in Sagittarius or Aquarius.

Venus in Capricorn and Venus in Leo might cross paths because they are both interested in the pursuit of status, but it would soon become clear they had very different motives drawing them to the same goal. 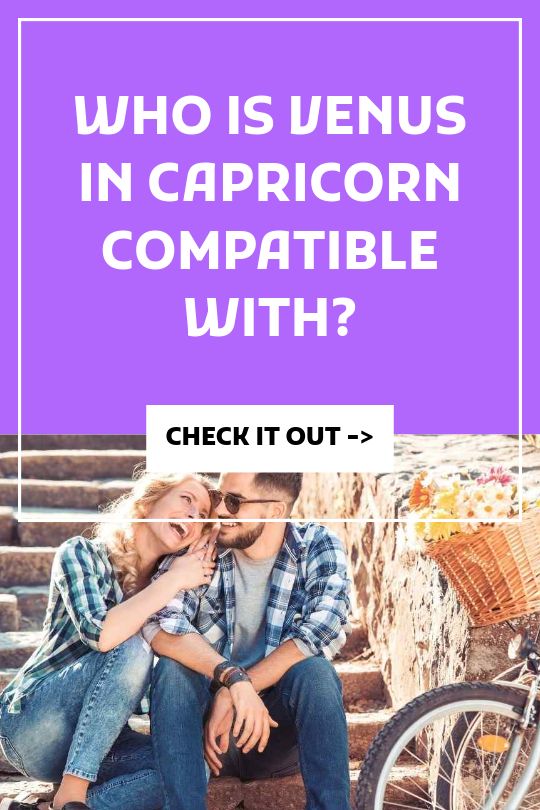 What Does A Capricorn Woman Like In A Man? – Vekke Sind

What Does A Capricorn Man Like In A Woman? – Vekke Sind

Who Is Venus in Pisces Compatible With? – Vekke Sind