Every planet has Zodiac signs it is more and less comfortable in. For the planet Venus, which is associated with things one values like love and money, the sign of Scorpio is not its favorite place to be.

If the planet Venus was in the sign of Scorpio on the day you were born, though, that doesn’t mean no one will ever love you. It just means you have to find someone who appreciates your unique style.

If you have Venus in Scorpio, your best compatibility matches are partners who have Venus in Virgo or Venus in Capricorn. Looking at the characteristics of the sign of Scorpio reveals additional possibilities.

If you aren’t sure where Venus is for your birth chart (or your partners’ chart), then try this tool for free!

Venus stays within two signs of the Sun in terms of relative position to Earth. That means people who have Venus in Scorpio can have the Sun in only the following signs: Virgo, Libra, Scorpio, Sagittarius, or Capricorn.

Do you know where Venus shows up in your Natal Chart?  Use this tool to see for yourself:

At the end of this page, you can also check your Synastry Chart.  That’s where you will input details about yourself and your partner and see how your charts align.

Best Match: Venus in Scorpio with partner’s Venus in Virgo or Capricorn

Virgo and Capricorn are the earth signs closest to the water sign Scorpio. The four elements – fire, earth, air, and water – typically break down into two groups of two: fire and air, and earth and water. Older astrology texts often refer to fire and air signs as masculine and water and earth signs as feminine.

In today’s world where people of all genders are able to express a broader variety of roles and traits, perhaps a better way to understand the difference between the two groups of signs is to look at their focus. Water and earth signs tend to be interested in security and in maintaining the structure that exists.

This can include the domestic stay-at-home parent, but it can also include the sort of person who looks for a job that is stable and guaranteed. No matter what happens in the world, industries like education, healthcare, food, and banking aren’t going anywhere. Those lines of work are therefore full of earth and water sign people of all genders.

The commonality here is that Venus performs best in signs that have a reputation for being generous. Virgo and Scorpio both tend to feel instead that they need to conserve what they have. A good side of this is that Venus in Virgo and Venus in Scorpio could both be excellent environmentalists, recycling more diligently than most people would have the patience for.

Venus can be a little lazy in the signs it rules. Venus’s side of the story is that sometimes relaxing is good for you. Venus in Virgo and Venus in Scorpio, however, are in agreement that hard work is important.

The three water signs, all of which focus on the emotional world, are Cancer, Scorpio, and Pisces.

Venus in Scorpio tends to experience the realms of love and money as full of trade-offs, where they can’t get everything they want easily and therefore have to figure out what they want most.

Two Venus in Scorpio people together would deserve each other. To have a partner capable of returning their own worst paranoid and manipulative tendencies might make them rethink a few things.

On the other hand, if they agreed with each other on what to be paranoid about, finally having someone agree with their paranoia might take some of the charge out of it, as feeling ignored and misunderstood tends to fuel Venus in Scorpio’s worst excesses.

Third Best Match: Venus in Scorpio with partner’s Venus in other fixed signs

The other fixed signs besides Scorpio are Taurus, Leo, and Aquarius.

They both could go the route of a conspiracy theorist or cult leader, though Venus in Scorpio’s cult would last longer because it would assume the worst rather than the best about human nature. Venus in Aquarius’s idealism, however, could be useful for getting Venus in Scorpio out of a dark rut.

The signs that have not been covered yet are Libra, Sagittarius, Aries, and Gemini. Aries and Sagittarius are fire signs, and Gemini and Libra are air signs.

Libra and Sagittarius are the signs on either side of Scorpio. As noted previously, Venus can be no more than two signs apart from the Sun. There are therefore many Venus in Scorpio people with the Sun in Libra or Sagittarius.

These two would be able to scheme together to come up with a unique relationship that suited each person’s needs as well as possible. It would be hard for the Venus in Scorpio person to be pushed to scheme out loud, but the result might be worth the trouble. 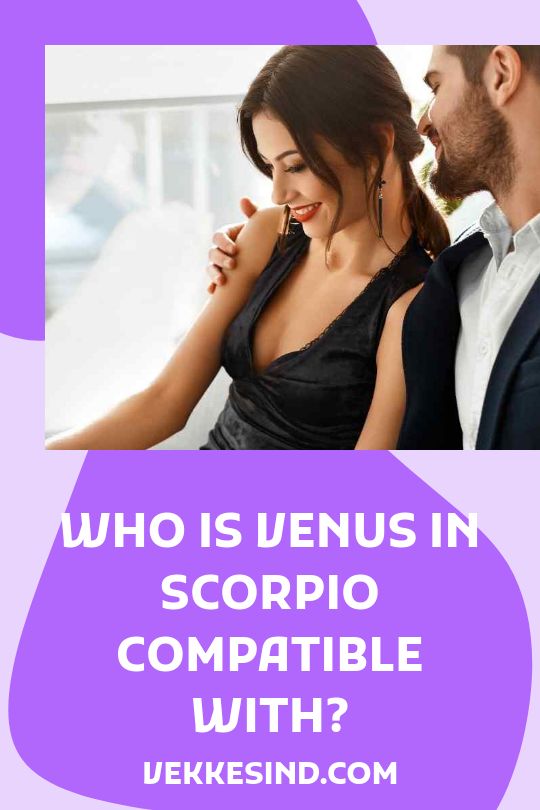 Why is Venus in Scorpio Such a Powerful Placement? – Vekke Sind

Venus in Gemini Compatibility. Why Is Venus In Gemini So Hated? – Vekke Sind