The Scorpio man is determined and fixed to his pursuit. He is like the personification of Hades in love. He is possessive and intense. The Scorpio man is full of passion. For him, if he can’t have you, no one should. A Scorpio man should not be underestimated, he is mysterious and trust does not come easily to him.

The Scorpio man in marriage is one of the most intense unions possible. He loves so passionately that you might think he is too aggressive, too controlling but the opposite is true. He is fearful of losing you. To be with a Scorpio man is to be exclusive to him and no one else.

If you want even more details that we have here about your Scorpio man, also check out “Scorpio Man Secrets“.

The Scorpio man in courtship

The Scorpio man gets his appeal from his intense passion and obsessive behavior. Whatever he decides on he makes sure to get it no matter what the cost. In love, he is jealous and it is not easy for them to trust anyone or let them into their lives easily.

He is independent. In the zodiac representation, he is not just the scorpion but he is also the phoenix. No matter what life throws at him, he will rise up again as a better version of himself. The Scorpio man is somewhat open to sensual encounters but would still prefer a relationship that won’t waste his time. He would still want to find a long-term commitment.

The Scorpio man tends to be attached to his other half. He basically gives everything that he has. He makes a devoted and faithful partner. He will protect and provide for his love without excuses. The Scorpio man can make an ideal partner but he is not without difficulties.

Since he is a possessive lover, he may think that you are up to no good, this can be exhausting when you have always looked out for the relationship. He can also be dominant and full of secrets so it can be stressful if you’re seeking a truly intimate relationship with him.

That’s what he also wants but the Scorpio man takes forever to realize that power is not always the answer to getting what you want. He also prizes honesty above all and to be able to trust another is like a miracle to him. He is someone that is always guarded not knowing the beauty of being vulnerable can also be a source of strength.

When a Scorpio man loves you, he will be protective and caring. He will always find a way to make you feel wanted. He would always want you to himself and get to know you privately. The Scorpio man will treat you well and expect to be pampered even if you didn’t ask.

Marriage with a Scorpio man

The Scorpio husband can never be too careful and cautious

He can never be too suspicious. Even if he has already tied the knot with you, he still looks out for loopholes and leaks. If there is a weakness in him it is because of his suspiciousness that he doesn’t realize how appreciated or loved he is.

The Scorpio man is perfectly capable of manipulation and living a double life if he desired. Though, he can only do this if the marriage is not coming from a place of compassion but of not being able to get what he wants. If there is anything you need to take note of, the Scorpio husband can be hungry for power and will plan his actions in ways that will benefit him.

The Scorpio husband likes to have authority

The Scorpio husband is dominant. There is a reason many articles would consider Pisces or Cancer as their most compatible partners because they are more submissive. He prefers to have a partner that does not question what he does and can trust his decisions.

In marriage, he can be traditional. He wants to be the head of the household and can be prone to domestic rage. If his wife happens to be dominant in her own way as well, they might have a lot of arguments. Though, it is also true that he appreciates an independent woman because it gives him a form of thrill.

A Scorpio husband has his own pride and it’s difficult for him to admit any mistakes from his end. He may even make a lot of effort just to hide his failures from anyone. He will not enjoy any form of nagging. He is not a child and would not wish to be seen as one.

He wants to see a woman that can stand on her own two feet but is not too intimidating that you are the one trying to control him. The Scorpio husband wants to establish that he should be the alpha of the home. The idea is to be a willing partner and it is also possible to influence him just make him feel like he’s the one who wanted it.

Check out “Scorpio Man Secrets” for everything you ever wanted to know about a Scorpio man… (but were afraid to ask!)

The Scorpio husband will be protective and caring

Even though he has a jealous and possessive personality, he also makes it up for his protective and caring nature towards the ones he loves the most. Not everybody can get to know the Scorpio husband the way his wife is allowed.

When he is coming from a place of love, the Scorpio husband wants to do his best for his wife and his future family. The Scorpio husband makes an excellent caretaker and even though he has a dark and gloomy exterior he actually has a great capacity for nurture and ironically, this is because it is somehow a form of control for which he likes.

The Scorpio husband likes his receipts

Do not lie to a Scorpio. He is very investigative and keeps information as a form of counterattacks. Like Cancer, he has an elephant’s memory. These people do not forget and it doesn’t help that he can also be vindictive from those who have given him reasons to.

The Scorpio husband will be straightforward. He tells you exactly as he thinks as he is comfortable in revealing. He is brooding, when he makes his plans, he cannot be rushed. He will make sure to take care of every detail. It is really up to the people around him on what kind of treatment will he do to them. Of course, if you know he loves you, then you’re more than safe and sound.

The Scorpio husband may demand a lot from you

This applies to the bedroom. The Scorpio husband has a strong drive. He is ruled by both Mars and Pluto, these planets are ruled by aggression and transformation. He will do to you the most unholy things and only think of morality after he’s done with his devilish passions.

It would be a bad idea to use pleasure to manipulate him. The Scorpio man is all about power and dominance that he can always get from different women. He just sees that he is devoted to you and puts loyalty first. If you, do it too much, he might think you are giving him mind games.

The Scorpio husband also makes a competitive partner. Whatever they fixate themselves in, they give it their all, no matter what will cost them. He is obsessive to a fault.

The Scorpio husband just wants to be intimate

Not in a sensual way but something that transcends the body. It might be weird that he, himself is jealous, possessive, and quite suspicious of his partner but he would never want to be treated the same way.

If he has the deepest desire, it is being able to have the intensity of being able to surrender when he is all about power. He is also still influenced by the water element making him intuitive, it’s hard to hide what you may be feeling from a Scorpio husband because he simply just knows.

The Scorpio husband is a romantic. He wants to have a love that lasts forever. When he is truly in love with his wife, infidelity is out of the picture. It is best not to give him reasons to be suspicious of you because he does not project jealousy very well. He wants to know and be assured that his wife is exclusive to him and no one else.

Check out “Scorpio Man Secrets” for more in-depth training about your Scorpio man!

The Scorpio husband has self-control

The thing with Scorpio men is that if he’s determined to have something, he will make sure he gets it. In finances, he will be able to show that he’s capable of building wealth. In mythology, Hades, the god that is associated with the dead and Scorpion traits, is not just a god of the underworld but also a god of wealth.

The Scorpio husband is able to make sound decisions financially. It will not mean he is a penny pincher but he could if he wanted, he would still make a way to make you feel spoilt and taken care of. The Scorpio husband is not cheap, he just knows how to delay gratification for an even greater return of investment.

Marriage to a Scorpio man, in a nutshell…

The Scorpio man in marriage is a fairytale or your worst nightmare. He makes a devoted and protective partner. He will make sure to provide for everything that you may need but he would demand your loyalty and that he must be the one to lead.

The Scorpio husband is dominant in his ways, including the bedroom. If paired with a partner that is also independent and authoritative, fights may ensue. She may instead try to influence her Scorpio husband by planting that he is the one that wants to do what she wants him to do.

He would love everything about you even the things that you would normally hate about yourself. The Scorpio man loves his wife for who she is. If only she can also reciprocate total exclusivity to him then it would make his fantasies come true. 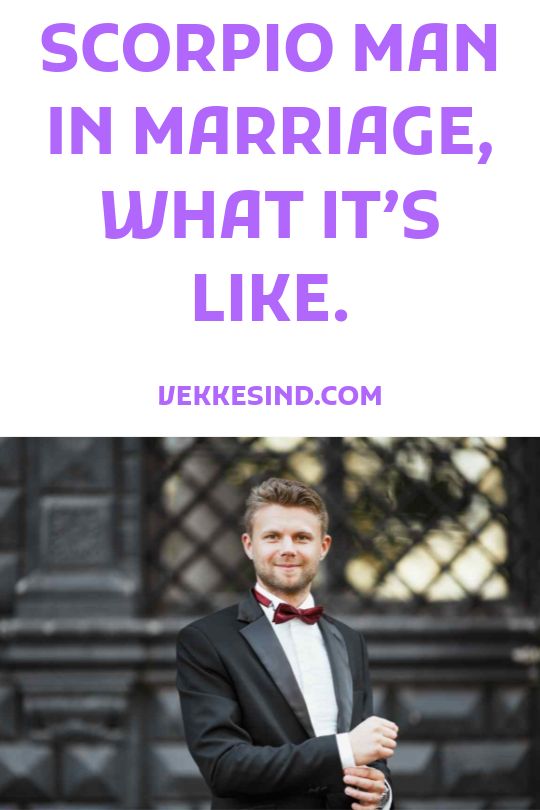