If you are a Scorpio man looking for advice when it comes to an Aries woman, then the article, Aries woman and Scorpio man in marriage is written for you…

The relationship between a Scorpio man and an Aries woman is full of intensity. Both even have the same rulers in traditional astrology, which is Mars, the planet of aggression, but Aries approaches life more directly and in your face whilst Scorpio tends to plot his actions carefully before executing his attack.

The Scorpio man and Aries woman in marriage will lack the sweetness of other couples but both agree that they can be honest with one another. These two will value honesty which could suggest the pairing can be a good match, though they have differences in their approaches, it tends to work in their favor.

For more in-depth details about your Scorpio man, check out “Scorpio Man Secrets“.

The Aries woman is a fighter but so is the Scorpio man. There will never be a truly peaceful time when it comes to them. Conflicts can be heavy and neither wants to admit defeat. The Scorpio man may pretend to be the loser for now, but he makes sure to strike when the opportunity presents itself.

As lovers, they do experience an instant attraction. As both are ruled by Mars in traditional astrology, they have a natural understanding of each other. They also tend to take their commitment seriously. Aries may fall fast and let the Scorpio man know she likes him. Their relationship helps the Aries woman become more confident of herself and to learn to strategize her energy.

Meanwhile, the Aries woman as she is someone who is future-forward encourages the Scorpio man not to dwell too much on the past and help him move on from traumas, insecurities, and things that hold him down. These lovers motivate each other to be a better version of themselves.

On the downside, they may also have issues with power. Both are ambitious and dominant signs. Even though they have an understanding, they still contrast when it comes to how they approach things in general. The Aries woman may not want to submit to her Scorpio man, she is way too independent and her weakness is actually on cooperating with others.

The Scorpio man simply wants his partner to trust him enough to follow him. When he loves, he can be possessive and very protective. He needs to know his partner is loyal to him and him alone. He can be extremely emotional at times and he never takes betrayal lightly.

For more details about “Dating a Scorpio man… and the 12 things you need to know!” click here.

The Scorpio man and Aries woman will enjoy a very rich sensual experience. The Aries woman having masculine qualities is more direct to the point. She may not always need connection or emotion just to be in the mood. She is carnal and loves to feel her partner.

There is a balance since Scorpio tends to make love from an emotional perspective. While the Aries woman focuses on the physical part of lovemaking, the Scorpio is able to balance it through his depth. He is somehow the ice whilst the Aries is on ablaze.

The Aries woman will become addicted to the magnetic charm of her Scorpio man, you can bet your two cents that even if things become toxic, they will still keep coming back for more. They really do transcend heaven and hell when they make love. If only they can convert the energy into world peace.

For 6 Steamy tips to turn on your Scorpio man in bed, click here!

The Scorpio man is a water sign with fixed qualities and the Aries woman is a fire sign with cardinal qualities. These differences help them understand the contrast of their worlds. They learn from one another what they don’t usually see.

Their friendship can be described as intellectual. They are like coaches to one another, motivators, and challenge each other to push through the uncomfortable. Communication would run smoothly between these two as Aries doesn’t favor mind games which Scorpio likes. It means that they will be straightforward with one another on what they want to say or do.

Check out “Scorpio Man Secrets” for everything you ever wanted to know about a Scorpio man!

When a Scorpio man and Aries woman fall in love, there is a strong bond between them. The connection is magnetic and adventurous. Both will enjoy activities such as hiking or camping together. The Scorpio man appreciates the direct-to-the-point attitude of Aries. The reason is, the Scorpio man is naturally skeptical, though the Aries woman may have to realize that her Scorpio man is a jealous lover and her flirtatious attitude may need to be tamed.

The two can be opinionated at times. They are both stubborn but the weird thing about it is that sometimes it can turn them on more. When it comes to money, they might have to make an adjustment. A lot of patience will be necessary.

The Scorpio man can be a penny chaser. As a fixed sign, he likes to build and store his resources. He is very focused on his goals. This is the same with the Aries woman but sometimes she can get distracted, it is like she may have saved for something only to blow it up on something else. Again, the Aries woman prefers to enjoy the moment and rides on the thrill of the present.

The Aries woman is not a wall, she is definitely capable of being affectionate but it is not her forte. The Scorpio man is also the same. He prefers to show his love through gifts and making time. They may look like the type of couple that lacks sweetness but if it works, there’s no need to question it.

Does a Scorpio man and Aries woman work, is it a good combination?

The Scorpio man and Aries woman can be a good combination. They teach what the other one is lacking. Both signs are strong, independent, and courageous. They may seem like they have a lot in common but that’s just the mask. Once they get to know each other on a deeper level is where their willpower will be tested.

Marriage between Scorpio man and Aries woman, in summary…

They are the type of couple that may opt to delay having kids. The Aries woman, after all, loves her freedom and she is not keen on being stuck at home to manage the children. She is more of a career woman and so is the Scorpio man who can have a great focus on the things he wants.

The Scorpio man is a jealous and possessive lover. He is protective and domineering to the person he wants to marry. The Aries woman may have issues with this. She may not always submit to the Scorpio man because she is not a damsel in distress and for her, she can handle anything.

In marriage, they enjoy mutual trust which is the highlight of their relationship. Both have a distaste for lies. The two have a great capacity for loyalty and can be devoted to one another. The only thing that will be considered an obstacle is willpower since this is not a marriage free from disagreements. 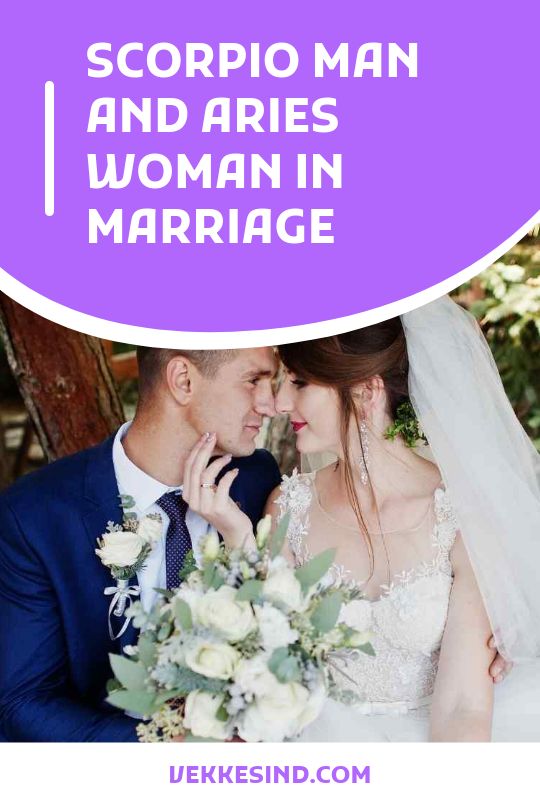