Scorpio is the eighth stage of astrological cosmogony, from Aries’ “I am”, Taurus’ “what is mine”, Gemini’s “who is around me”, then Cancer’s “what are my roots”, over Leo’s “what is my joy” and Virgo “let’s work this over”, Libra and the concept of union, of “we”.

Now, we are entering the “hidden” world of transformation in Scorpio with the “show me what’s on the other side of existence”.

To attract a Scorpio man, you should appear to be in the process of transformation or have transformed yourself to become someone who had gone through some hardships, and now stands firmly on the ground. This inner glow of strength will work like magic on him, besides your hidden sexuality and charm.

If you are looking for more in-depth training to attract and keep a Scorpio man, then I’d suggest you check out “Sextrologist” and zodiac-based dating expert Anna Kovach’s book Scorpio Man Secrets.

Why is a Scorpio man so mysterious?

A Scorpio man can truly appear as someone mysterious, but this aura of darkness around him is usually derived from some harsh experiences he had in the past. Therefore, he could be hurt and his soul powerfully injured, and he is now hiding his emotions in order not to be hurt again.

The four major elements in astrology, fire, earth, air and water are the cornerstones of recognizing universal energies. And the sign of Scorpio is the second or the “fixed” form of the water element.

In Cancer, the water element is revolving around family roots and simple emotions for others, in Pisces, it is about the cosmic emotional connection with everything, but Scorpio, we can see this bridge between the inner and the outer world of the soul existence.

This is exactly why the huge transformational process is taking place in Scorpio bridging the life, the usual life, and death, or all sorts of experiences that are forcing the individual to “die” and to be born again through several phases in their life.

The ruler of Scorpio is the planet Mars, and this planet can be placed anywhere in the natal chart showing different types of inner transformations and the real outer challenges, as well as the strength of that individual.

However, when Mars is in Scorpio, besides his natal Sun, this Scorpio man will be very psychologically and even, physically powerful, no matter is he “good” or “bad”.

If a Scorpio man’s Mars is in water signs, Cancer, Pisces, and Scorpio, he will then be truly mysterious and his soul will be very vulnerable covered with the millions of self-defense layers.

If his Mars is in fire signs, Aries, Leo, or Sagittarius, he will be more physically skilled and ready for adventures. The position of Mars in the earth signs like Taurus, Virgo, or Capricorn will give him so much needed dose of stability and he will be destined to become an expert or a truly wealthy man in any profession.

If his natal Mars is in air signs, Gemini, Libra, or Aquarius, he will show great mental or emotional instability and psychological weaknesses.

What are the main traits of a Scorpio man?

As an exceptional creator and organizer, when a Scorpio man once steps out of the mediocrity of his Zodiac sign, then his life will grow into a mission, vision and he will clearly show his full genius. And that is why it is not a coincidence that many innovators and creators were born in this sign.

Given his courage and discipline, the Scorpio man will deservedly reach high positions, or if it is a “lower” type, then he will become a bully, a critic, a rebel, or a megalomaniac.

A military career often suits such a man, because he can show and channel his destructive urges for the sake of something useful.

Astuteness, perseverance, and the power of concentration are characteristic of all situations for this man. He is always very ambitious in achieving his goal regardless of whether that goal is positive or negative, morally or legally.

He is serious and stricter than other water signs, sometimes even rude because he does not tolerate orders.

Can you seduce a Scorpio man?

You can instantly seduce a Scorpio man, or you will never seduce him at all, no matter how hard or wise you are trying to, depending on your inner spark which he will notice straight away. If he can identify with your “inner truth” then he will be powerfully attracted and easily fall in love.

To be able to understand what attracts a Scorpio man you would have to know the position of his natal Venus because this planet shows what he desires in love and how his partner should look like.

Since Venus is never more than 45 degrees away from Sun, if he is a Scorpio man, this means his natal Sun is in Scorpio, and his natal Venus can be in Virgo, Libra, Scorpio, Sagittarius, or Capricorn.

Therefore, if natal Venus is positioned in Virgo, he will fall for smaller and thinner types of partners, disciplined and humble, ready to serve and help others. In the case his Venus is in Libra, he will become attracted to an elegant and mannered person, who is often very diplomatic and well-known in social circles.

If his natal Venus is in Scorpio, he will surely be amazed by someone ambitious, wants to achieve the position of power, plus look sexy or seductive.

In the case a Scorpio man has his natal Venus placed in the sign of Sagittarius, he will then mix financial and emotional goals, and he will be strongly attracted toward educated, free-spirited, and adventurous types of people.

Lastly, when his natal Venus is in Capricorn, he will seek a best friend in that person before they become lovers, and this special individual could be older than him, quiet, but disciplined and also very successful in their career.

Check out “Scorpio Man Secrets” for everything you ever wanted to know about a Scorpio man… (but were afraid to ask!)

How to attract the younger Scorpio man

The younger, and therefore, not so experienced Scorpio guy will fall in love, or at least, have powerful ambitions to seduce someone who essentially has innate feminine traits, like calm nobleness, nice movements, gentle appearance, and latent sexuality hidden under the veil of elegance.

The area of partnerships for Scorpio falls in the sign of Taurus, ruled by the planet Venus. But no matter whether his natal Venus is placed anywhere from Virgo to Capricorn, at that age in life, he will look for someone feminine in a physical sense, receptive, grateful, and skilled in traditionally know female tasks.

This is why all you have to do is to be gentle and romantic and place yourself somewhere close to him. If he is attracted, he will do all the work, introducing himself, asking for your phone number, messaging or calling, end eventually setting the date.

Also, you should act a bit conservative, letting him fight for your time and attention because he will respect you more in that case.

How to attract a mature Scorpio man

The older or the mature Scorpio man will become instantly close, and after a while, strongly attracted to those individuals who are calm, home-oriented, sensitive and sensual, and at the same time, have lovely inner visions of distant or magical worlds exiting in their hearts or careers.

The matter of fact is that the older Scorpio guy could easily be divorced or had to go through at least several significant and highly turbulent relationships, which left some deep scars on his heart, and in some cases, his valet, too.

Also, at this point in his life, he is far from being poor, and therefore, he, as someone established in his career and wealth, doesn’t feel such a great urge to build something new in the material sense.

Wealth is something he already has, and now he is after the genuine feelings which will awaken the long-forgotten kindness in his heart.

This is why he will suddenly become strongly attracted toward Pisces and Cancer types of characters. The sign of Pisces is the area of love and romance for a Scorpio guy, and Cancer is the area of higher knowledge, spirituality, and also, the second marriage or committed relationship in some western astrology schools.

He will try to awaken the magical moments of falling in love with someone who is genuinely involved in some sort of fine art, revolving around the worlds of higher mathematics, physics, chemistry, psychology, or spirituality.

This person can’t pretend that those areas interest them, this person has to be deeply emerged in those worlds to get his full attention.

On the other side, he will also protect and respect someone who looks truly vulnerable, and in this sense, feminine, while trying to cope with the challenges of the outer world.

He will become naturally inclined toward this type of individual who loves all domestic tasks and maintains their little, beautiful, but well-guarded fortress of peace.

As I mentioned at the beginning of this article, check out Anna Kovach’s book, Scorpio Man Secrets, for more in-depth training for women who want a Scorpio man to chase and desire her. 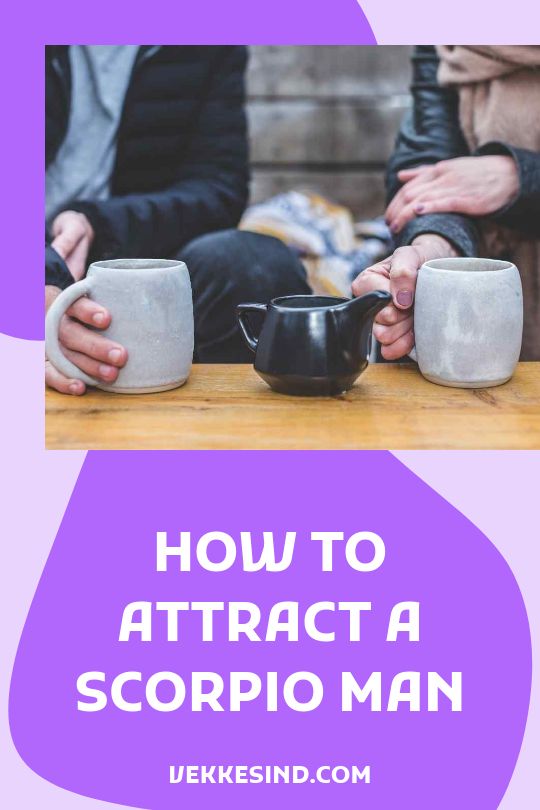