If you are a Sagittarius woman seeking some advice about marriage to (or a long-term relationship with an Aries man, then click over to the article, “Aries man and Sagittarius woman in marriage”, which was written specifically for you.

So, let’s go over it… The Sagittarius woman is all about freedom and exploration. She is a teacher and a philosopher and is the type of person to be blunt about what she thinks. She is unlikely to build a grudge against someone. The Aries man on the other hand is the masculine warrior. He is all about the thrill and excitement. Both the signs have similar wants and values. They get along well because they focus on the moment.

The Sagittarius woman and Aries man in marriage can be described as if they married their best friend. This is a union that ages well. They get closer and closer instead of falling out of love as time goes. It is a partnership that can last a lifetime.

The Sagittarius woman is a mutable sign which means she is adaptable, flexible, and might need help when it comes to making decisions. When she is dating someone, she is not shy to be flirtatious and display her feelings even in public. She makes a great motivator, often wears a positive mindset and if things don’t’ go her way, she knows there’s another day and nothing really lasts.

When she dates the Aries man, he may receive a lot of compliments. This is a sign that wants to protect her freedom. So, for her to make time for someone is a huge sign that she’s into him. As a free spirit, she lives in the present, something that the Aries man will get along with her.

Though she doesn’t come without flaws. Since she is ruled by Jupiter, the planet of expansion and luck. Her restlessness knows no limits too. She is feisty, even though she won’t get angry often, she can definitely put up a fight to prove something. This also is true when she is protecting the ones she loves.

As the two signs become closer, they will do their very best to make sure every moment is exciting. Both the Aries man and Sagittarius woman hate boredom. They’ll enjoy discovering new things and places together. The relationship can lead to something more given they’re always honest with one another and have clear communication.

For more details about “Dating a Sagittarius woman… and the 12 things you need to know!” click here.

In the bedroom, the Sagittarius woman and Aries man make intimacy feel like a playground for adults. The lighthearted Sagittarius woman will notice many things about the Aries man which may sometimes make him pause from getting in the mood. They might laugh about something while they’re doing it.

It’s easy to imagine them making fun of someone they both dislike while they’re pleasuring each other. Maybe they’ll make games like throwing dice to see which position they’ll try. They might drive off the map just to literally have wild sex. They’re both open and experimental that it’s best not to think about what they can have if you don’t want to feel envious.

For 7 Steamy tips to turn on your Sagittarius woman in bed, click here!

The good news with the Aries man and Sagittarius woman as friends is that they both value honesty and bluntness. They are both fire signs as well which means they have a natural understanding. The connection can run deeply even if it doesn’t lead to romance.

When they are hanging out, they feel like the other person is their home. There might be a challenge if one or both do not have the same level of maturity. You see, the Aries man is competitive and likes to win. The Sagittarius woman is firm with her belief and has a strong conviction. The two don’t want to back down on arguments that hopefully don’t annihilate their friendship over time.

When the Sagittarius woman and Aries man become lovers, it’s hard not to feel jealous of what they have. The Aries man feels secure about the Sagittarius woman’s bluntness. They have a love that’s even better than getting married. With or without the title, they’ll always have each other’s backs, for better or for worse.

The Sagittarius woman and Aries man are a great match because of their common interests and values. One of the key differences would have to be how Aries man can be demanding of straightforwardness. You either give him a one-word answer or he’ll be frustrated with how the Sagittarius woman can give an answer but she tends to philosophize it which can just confuse things.

Their relationships may have debates frequently. Another key difference is that the Sagittarius woman is more of a philosopher whilst the Aries man is a doer. One of the reasons their relationship work is their inborn independence. They both understand space is necessary from time to time. IF they are also able to make trust a strong part of their relationship, nothing will ever break them.

They might not talk about marriage immediately. Not unless they’re at an age that they have to. Most of the time they may be more content living together than settling down and having children. They are more of a couple that wants to travel and see the world. To be able to reach new heights of things they worked hard for.

Does a Sagittarius woman and Aries man work, is it a good combination?

The Sagittarius woman and Aries man is a great combination. For them, titles don’t even matter that much. As long as they know they have each other’s back and they were able to form a strong foundation of trust. They can rely on one another and since they share values of honesty, they get along really well. If not married, they can be friends for life.

Marriage between a Sagittarius woman and Aries man, final words…

The Sagittarius woman and Aries man in marriage have a lot of potentials to last for a lifetime. These two are youthful and energetic. They like to take their time before they even commit to something more than dating. The two of them place importance on their independence too much that it takes someone really special to change their lifestyle.

When they do decide to get married, they may just live together and postpone the children. They are more of a couple that likes to experience the world. Travel and career ambitions may be a priority rather than contributing to the world’s population.

These two even when they are married, feel like they’re always going to be best friends for life. Their relationship is like a fine wine that gets more expensive as time passes. They’re not the type that’s great at first and fall out of love later.

Arguments and debates may be a common theme but since they have a natural understanding of each other, it will most likely resolve by itself. Besides, the Sagittarius woman is not the type to hold on to grudges though she can put up a fight when it comes to her convictions.

It would be up to the Aries man to humble himself because he can sometimes be too competitive for his own good. 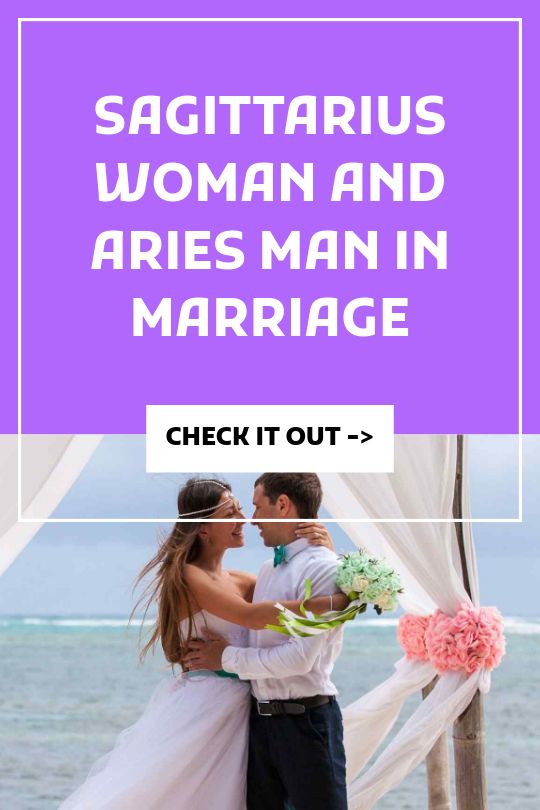