The Sagittarius woman is about keeping faith in the world around her. She exudes confidence in the people she is surrounded with and is constantly in the search for better experiences. She is social and outspoken, when she has an opinion, she will not be shy in letting you know.

When a Sagittarius woman is done with you, she does not want to be friends anymore. She may decide to cut you off completely. She is going to just live her life and is unapologetic. The Sagittarius woman will enjoy her newfound freedom in contrast to a restricting relationship and will not sulk too long after the separation.

That said, let’s see what it look likes when a Sagittarius woman is in love…

The Sagittarius woman in love

The Sagittarius woman will show her love language through words of affirmation. She is the encourager and motivator of the zodiac. She believes in the goodness of everyone and is reputed for her optimism. She likes to let things be, if things may have offended her, she lets herself feel then lets it go.

She is not the type to set up for grudges. Unless you have done something so unforgivable that she will actually have to. When you are dating a Sagittarius woman, she is spontaneous. She will like to keep it fun. You would know she loves you when she agreed on the commitment. Sagittarius isn’t really a sign that likes the idea of being tied on to someone.

The Sagittarius woman will be passionate with her lover and express herself in silly ways. She may tend to tease you in good light and she values the friendship between the two of you. She is adaptable to your opinions and considers your feelings.

She loves her independence yet it doesn’t mean she cannot be in a committed relationship. The perfect partner for a Sagittarius woman is a man that can be her best friend. Someone she can laugh with, her travel buddy, and can have those deep conversations with him. It is the type of love that’s light but reliable.

She may also express her love language through acts of service, constantly doing things for the person she loves without really expecting too much in return. The Sagittarius woman just does it out of a good heart and but don’t underestimate her, she is ferocious when protecting the person she loves.

How to tell when a Sagittarius woman has moved on

She doesn’t want to be tied on anymore

It is no secret that the Sagittarius zodiac sign is commitment-phobic. She loves her freedom a little too much and sometimes a relationship feels like she is going to miss out a lot by focusing on one person. When a Sagittarius woman loves someone, she is able to appreciate the beauty in it and allows herself to fall in love and be expressively passionate.

However, when there is a separation that happened, it may be difficult to get your Sagittarius woman back. Though it shouldn’t imply she is resentful, in fact, Sagittarius can be one of the most forgiving signs if you think about it. She is the type to see the perspective from the other person’s end.

They are not the best when it comes to handling emotions and the way they can be angry is through bursts. When she feels she has already learned her lesson in the relationship and there’s nothing more to gain then reconciliation is usually out of the picture.

She is back to focus on her own happiness

The Sagittarius woman can make friends wherever she goes. She is extroverted and has a charisma that is magnetic to people. When a Sagittarius woman has decided she will move on, she no longer considers your opinions her priority.

She doesn’t let what you think to get the best of her, she will instead become fixated on having the best life. The Sagittarius woman is wild at heart. It’s possible that she may try and have fun and then come back to you if she feels like it.

Remember, Sagittarius is not the go-to person when it comes to major decisions. They can be indecisive and sometimes allow their feelings to get the final say. The Sagittarius woman also is guilty that she cannot admit her faults, it is rare for them to say sorry especially when they don’t care about the person involved.

She basically ghosts you

The Sagittarius woman may start becoming fickle. She might prioritize her folks than you. Even if you happen to be in a group setting with her, she will not pay attention to you and focus her efforts on others or maybe meeting new people.

If you have made plans, she might call up and cancel at the last minute. She may start travel plans without you in it. When a Sagittarius woman loves you, you are included in her activities. They love to spend time with the person they love.

She thinks there is nothing to gain anymore

She doesn’t have to live the rest of her life in regret. The Sagittarius woman sees the world as a full cup. She is like the personified law of attraction that is why she keeps herself optimistic. Her attitude in life usually gives her good luck but of course not at all times where her impulsiveness and overly confident attitude can cause her setbacks too.

When the Sagittarius woman is done with you, she thanks you for coming into her life. You have taught her how to deal with people like you, she knows her shortcomings, and even though it’s hard for her to admit anything, she will try not to make the same mistakes in her next relationship.

She stops talking about the relationship seriously

The Sagittarius woman is ruled by Jupiter, the expansive planet. Maybe this is why she also tends to see the world as the big picture instead of being focused on the details. In the same way, she will not want to discuss trying to work it out anymore because she is no longer interested.

When the Sagittarius woman is calling it quits, she makes fun of the situation instead of being sensitive about what you might feel. She would make you feel invalidated. For her, she is already too disappointed and will not feel excited with the feeling of being constrained through a relationship.

This is a call for Sagittarius woman as if she’s looking for something fun, something new. If you want to get her back, you may want to approach her like she’s a target market. Convince her in a friendly debate why she would benefit from getting back with you, not being too serious about it and just giving her a good time.

She declines the friendship

The Sagittarius woman that still likes her ex will remain friends with that former flame. This is how the Sagittarius playbook works. Keep tabs with her ex, flirt with her ex, and then have her friends watch out over him and stalk him even. She and her squad will follow every notification and activity you have in your timeline to check if you’re already seeing someone new.

The opposite happens when the Sagittarius woman is so sick of the relationship. She basically denies the friendship or the idea of having to communicate with you. She will cut ties with common friends and family just to make a point. Again, she might not be resentful, but she has to move forward with her life.

She prioritizes other people

The Sagittarius woman will always prioritize the person she loves, she will decline all invites to events if it means getting to cuddle with her man. When she is decided to move on from you, she will react as if you are optional.

She will talk to other people instead of paying attention to you. There is no excitement when she has to be around you. Maybe she will awkwardly avoid you and pretend she didn’t hear anything. She could instead open a YouTube video and just wish it’s over already.

When your Sagittarius woman is done with you, in a nutshell…

The Sagittarius woman is done with you when she has detached herself and denied remaining friends. A Sagittarius woman that is still in love with her ex will choose to be friends with him and will still feel jealousy in some way.

The fact that she is not even bothered that he could be seeing someone else is usually an indicator that things are already over. You would have to move on and understand that not everyone that likes someone ends with that person anyway, the Sagittarius woman has learned something from you, she’s thankful but she will not admit it, she’s not resentful but she won’t apologize either.

When a Sagittarius woman does move on, it is difficult to get her back as she loves her freedom and puts it on a pedestal. She doesn’t want to miss a lot of things in her life. She will always choose to travel and learn about other cultures rather than settling on a traditional partnership where she is constrained to a routine. 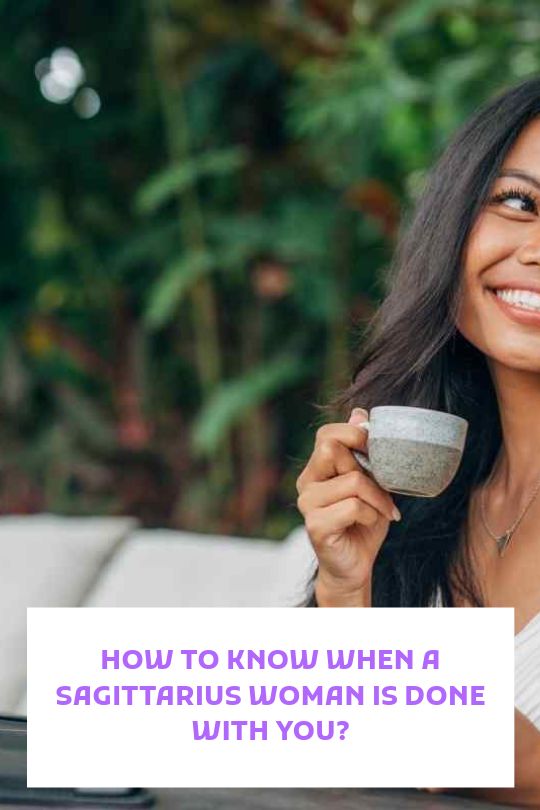