If you are a Libra woman seeking some advice about marriage to (or a long-term relationship with an Aries man, then click over to the article, “Aries man and Libra woman in marriage”, it’s written specifically for you!

OK.  That said, let’s get to it… The Libra woman is represented by Venus, the planet of love and beauty. She is charismatic and seeks harmony in all her relationships. She is fair and has a desire to maintain justice at all costs.

As an Aries man, you are more of the masculine warrior, represented by the plant of Mars which is about how a person deals with aggression, conflict, and taking action. You can be brash, confident, and may say things without thinking it over first.

The Libra woman and Aries man in marriage is a union of opposites. They either complement or throw each other off. Where the other lacks, the other strengthens. The Libra woman may struggle in decisions to avoid offending others. It is unlike the Aries man who is more reliant on his own core beliefs and objectives.

The Libra woman and Aries man are a pair of opposite poles. The warning about them dating is that they need to look out for trust issues. The two signs are naturally flirtatious and sometimes they don’t realize this themselves. The Aries man will especially be the one that is prone to jealousy if the Libra woman does not listen to him.

The two can agree on being pampered. The Aries man will always prioritize himself by default and the Libra woman adores being the social butterfly. Both signs want to be where the event is. The Libra woman may lack a bit of self-confidence because as the Aries man’s polarity, she often puts the opinions and feelings of others, in contrast to the Aries man may always say things without thinking twice.

When it comes to their own beliefs, the Aries man teaches the Libra woman to be a more confrontational person, not to be afraid to be direct to the point. The good thing is since she is a natural diplomat, she can do these in ways that will not be too offensive such as applying the sandwich method which means negative feedback is sandwiched on two positive qualities of a person.

When a Libra woman loves someone, she makes time for them. She will make a way to be with them instead of making excuses. Little things will be noticed and she will appreciate them. She understands that freedom is important which the Aries man will love about her. Her love language would be acts of service, often choosing to prioritize what makes him happy.

If there is also something to mention, the Libra woman and Aries man don’t take commitment on a pedestal. The two signs take their time before taking it to the next level. They don’t want to be tied to a person that’s going to stop them from doing the things they like to do. They will agree on giving one another space from time to time.

For more details about “Dating a Libra woman… and the 12 things you need to know!” click here.

In the bedroom, the Libra woman and Aries man can have a great time. The Aries man doesn’t want to take it slow; he wants to get it on right away. The Libra woman will be slow to try out things that she’s not used to. Though the great news is, she is very sensual and appreciates the love she gets.

So, there might be some things the Aries man may not get immediately but overall, their sex life is great. They might take turns doing it their way. They’re the type that if they become exes they’ll still call up each other just to get it on.

For 7 Steamy tips to turn on your Libra woman in bed, click here!

As friends, they can have chemistry. Their partnership makes them a power duo when it comes to schoolwork or even in the corporate scenes. The Libra woman can entice and persuade prospects whilst the Aries man makes sure he delivers.

The Aries man just needs to be less all about him and be considerate about the way the Libra woman operates. The only problem is that the Aries man is more of an independent worker and this may not be a strong point for them. There might be a bit of friction when it comes to their friendship, but it’s not bad at all.

If there is a style to how an Aries man and Libra woman come together, it is the Libra woman who loves to be pampered, she enjoys being desired. The Aries man takes in the cloak of a hunter, preferring to do the chase. Things can work smoothly with this couple or it doesn’t. There is no in-between.

The dynamic of the passionate and determined Aries man paired with the charismatic and persuasive Libra woman can be suggestive of a power couple if done right. They also share the same modality as a cardinal sign, this means they are both great at starting new projects but it is another question if they will be able to finish it.

The test of this couple comes from taking it to the next level. Dating is something that’s focused on having a great time but it is another perspective if it’s about a lifetime partner. When they are just dating, it seems like they work well but it can be pressuring when they intend to get married.

The Libra woman needs to be loved. She is giving and can be tolerant. She has the patience of a saint. Though, it means not to take her lightly because when she is angry, she can be the person nobody expects. Besides, the Aries man and Libra woman are great especially at first but unfortunately, they’re not the ambassadors or representatives of a long-term relationship.

Does a Libra woman and Aries man work, is it a good combination?

The Libra woman and Aries man is a great combination if it’s just about dating. Marriage is a different story. They’re not the signs you first think of when it’s about long-term commitment. Though it will be worth their while and even if they separated, they’re the types of lovers who can remain friends and call one another for a quick steamy session.

Marriage between a Libra woman and Aries man, final words…

The Libra woman and Aries man in marriage will definitely need effort for both parties. They live a rich dating life but since they are both cardinal signs, it means they’re great starters but not necessarily known as the types to be there until the end.

The two signs share common traits like their value for independence. If there’s one thing that they get for being together it is being able to teach each other what they’re lacking. The Aries man will show the Libra woman to be more fearless and unapologetic. She will return the favor by showing him that he doesn’t lose anything by considering others in his life.

Their sex life would be great. The marriage between the Libra woman and Aries man is not like wine where age gives it more value. They tend to become bored over time. It will take work for the two to keep things exciting but the Aries man has a great capacity for faithfulness and so is the selflessness of Libra woman as long as she believes in a cause.

It is going to take work, but they will definitely have no regrets about coming together. 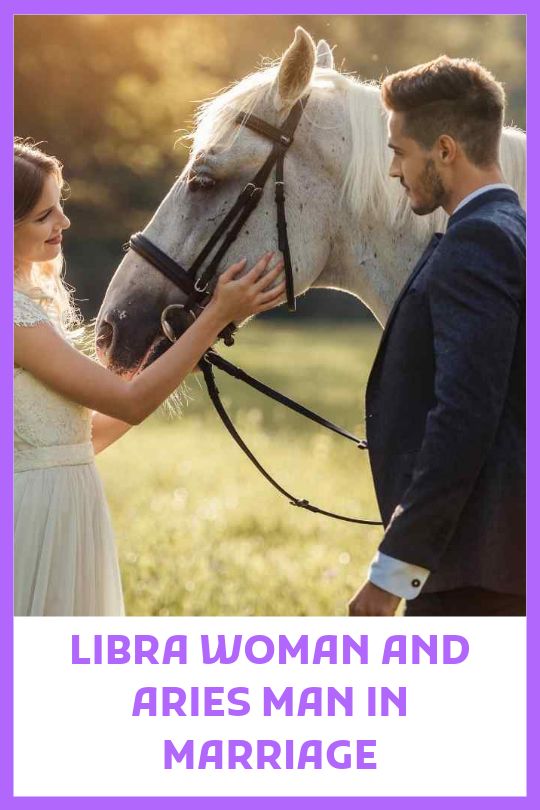