The Libra woman makes a fun, charismatic, and sociable host. When you’re dating a Libra woman she will give you the time of your life. She does not have difficulty having a few admirers at a time and has the ability to lighten up the mood of a room. The Libra woman places relationships as one of the most important things in her life, aiming to keep a harmonious and peaceful ambiance with everyone.

When a Libra woman is done with you, she will already be meeting with different men. She is having the time of her life, she may have cried about you but once she has found all the reasons it was never going to work, there is no point of return.

That said, let’s see what it look likes when a Libra woman is in love…

The Libra woman in love

A Libra woman that is truly in love with someone spoils her lover with the finer things in life. Socialization is important to her and if she brings you to any gatherings, she will still pay attention to you more than those she could meet.

When a Libra woman is truly in love, she takes note of your favorites and memorizes the topics that you don’t like talking about. For Libra, it’s about those small details that make someone unique. Even if people invite her to events, she would rather be with you than enjoy a night out.

She will be showing excitement through her eyes and even if there are many attractive men around, she will only have eyes for you. When a Libra woman finally commits to someone, she expects the same from her lover.

The Libra woman will share happiness with you. When you are happy, then she will also feel the same. You will know you have already won her heart if she stays with you even at your lowest. She will do her best to involve herself in your life and make things lighter for you.

When you love a Libra woman, every day is a romantic encounter. She can make a movie out of little moments because she knows how to cherish her relationships. She understands that life is just borrowed and that anytime this could be taken away.

She changes her lifestyle (or just her style)

When a Libra woman has called it quits, she will start changing some habits. She may try to do this through her style. Maybe she has never worn a certain top before, then she will suddenly go out wearing it. She might get a haircut, have a color, or start wearing accessories. There will be a difference once she is done with you.

The Libra woman is almost seeking the attention of others and doesn’t care if you are threatened by it. She might hit the gym; she could suddenly be motivated to live her best life. If you have given her any trinkets, she could stop wearing them, announcing to the world that she’s a free woman, waiting for her line of men.

She doesn’t make any effort to communicate

As a sign that values relationships, when a Libra woman no longer wants to continue the relationship, she acts detached. You may be with her at all times but she will make you feel alone. The Libra woman might not bother listening to what you have to say.

In social gatherings, you would notice that she’s prioritizing other people over you. She makes excuses to go to a different table and leave you alone. She might have used to give you small gits but not anymore.

The Libra woman would also stop making an effort to bond with you. She might say no to your suggestions. For someone that values a person’s thoughts of them, yours are not important and she continues to pull away.

Libra is a sign that avoids conflict whenever possible. She is indirect and that could mean passive-aggression. The Libra woman might have issues with you but does not tell you directly. Instead, she might give sarcastic remarks when given the chance. Other times, she distances herself and plants resentment.

Are they capable of executing revenge? Yes, they can. Your Libra woman takes note of your pet peeves, likes and dislikes, your weaknesses, and so forth. She can play manipulative games to get what she wants and even recruit the help of her friends. Maybe they’ll talk about you behind your back.

Either way, if you have broken up with a Libra woman, pray that you make peace with her. There is a reason Saturn is exalted in Libra. According to ancient philosophers, peacemakers usually disrupt the balance by trying to control things instead of letting nature run its course.

The Libra woman that was hurt from your separation may decide to ghost you. She will block you from all social media platforms. Most of the time, she has decided that she wants to move forward in life without you.

It’s also possible she has chosen another man over you. Maybe someone else is able to make her feel appreciated. Maybe she thought you were hindering her opportunities. Either way, when a Libra woman blocks you, it’s best to move on with your life.

In real life, she may tend to ignore you, or if she has to keep face, avoid having to talk about anything, and will not initiate conversations.

She gives shorter to no replies

Libra women are influenced by air. This is the element of communication. The fact that she cuts conversations short or avoids it means she is no longer interested. Her body language may suggest awkwardness.

For the Libra woman that decided to move on, she wants to get out of your face already. She doesn’t have to feel disgusted but it is just awkward to her and it’s possible that you are triggering confusing feelings that she doesn’t want to deal with.

She celebrates her newfound freedom

When the Libra woman has moved on from you, she will enjoy her single status. She might spend hours swiping right and meeting her next prey. She could focus on her own happiness. She will cut ties with your family and friends if she has to. She may also change her environment to support her new life.

Prepare your heart for the worse, when you see the Libra woman having a blast and making the most of her life, seemingly without regret, it is what it is. A Libra woman may be down to cry over a relationship but once she lets go, that’s it. You can try again next life.

She becomes rude towards you

The sign of Libra is known to be the diplomat of the zodiac wheel. When a Libra woman does not value you, you will know. If she can treat strangers right and treat you worse, that just means she has resentment towards you.

When a Libra woman truly loves someone, she is very careful about her words and actions to avoid hurting anyone. If she has been hurt by you. It will be the opposite. She will actually be ready to attack you and slap all the receipts she has collected if she’s frustrated enough.

For once she doesn’t care about the harmony but prioritizes the fairness and justice that Libra also symbolizes. If I were you, take this opportunity to make it up with her even if you don’t end up going back together. Libra is influential and there’s no telling what she can do about what others think of you.

Is your Libra woman done with you, final thoughts…

The Libra woman is done with you when she is already meeting a lot of dates. She is focused on her own happiness and is living her best life. The Libra woman is a hopeless romantic but she knows that there is more beyond your relationship.

Sometimes she may need space, but if you see all or at least most of the signs above, she is less likely to come back to you. Libra women are one of the most difficult signs to commit. Having a relationship with one feels like a miracle already because they have an indecisive nature.

She will mourn for you and feel like she failed, maybe there will be some chances to make it work but beyond that, once she has decided to completely move forward, there is no turning back. 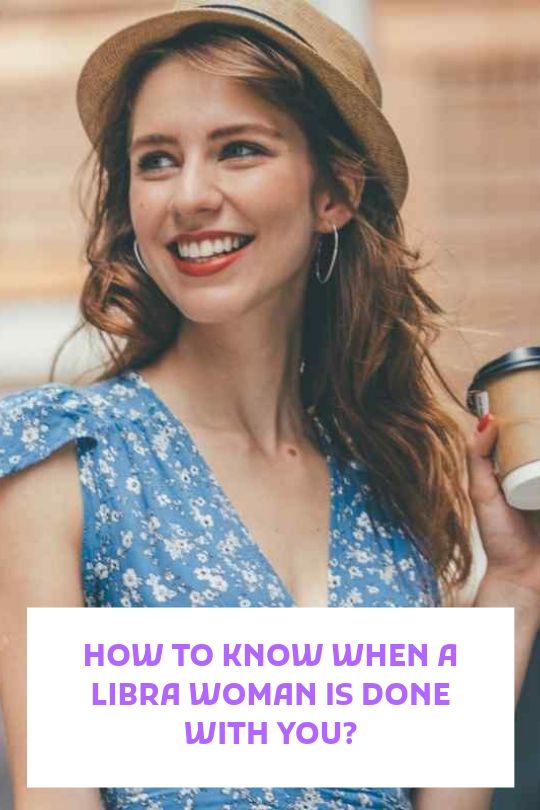