If you’re hoping to impress a Cancer guy, then you need to know what he looks for in a romantic partner.

A Cancer man likes a sensitive, thoughtful, and sweet woman. He is very generous in a relationship, and he likes a feminine lady who is as romantic and devoted as he is. He’s a traditional guy that wants to settle down with a woman who can help him create a beautiful, loving home and raise a family together.

If you are looking for more in-depth training to attract a Cancer man and play for keeps, then I’d suggest you check out “Sextrologist” and zodiac-based dating expert Anna Kovach’s book Cancer Man Secrets.

10 Characteristics a Cancer Man Loves in a Woman

Some men like a tough, stoic woman who hides her feelings and never lets anyone see when she’s hurting. But a Cancer man prefers a lady who can show her vulnerability.

He likes the idea of being the knight in shining armor who rescues the damsel in distress, but this doesn’t mean that he wants a weak, submissive woman.

A mature Cancer man knows that vulnerability is a sign of true strength and that it takes a lot to let your guard down and show someone how you really feel. He can’t help but wear his heart on his sleeve, and he is attracted to a woman who does the same.

Cancer is perhaps the most sensitive sign of the entire zodiac, so a Cancer guy needs a woman who not only appreciates his sensitivity but is also sensitive and intuitive herself.

A Cancer man isn’t afraid to share his feelings, but he can also be a bit passive-aggressive. He needs a partner who can pick up on his mood without him having to say a word.

This may seem like an unrealistic demand, but he is so attentive to his partner’s needs at all times that to him, it’s a reasonable expectation.

Some men don’t like it when a girl is too sensitive. They think it means she’ll get her feelings hurt or become upset too easily.

But a Cancer man knows that sensitivity makes a person more thoughtful and considerate, and he is more than happy to cater to his partner’s emotional needs.

Every zodiac sign has a unique symbol that reveals something important about that sign’s personality. Cancer is symbolized by the crab, a creature that carries a hard, protective shell on its back everywhere it goes.

This tells us that although a Cancer man loves being in a committed relationship, he has a hard time trusting people enough to let them into his heart. He is very guarded and cautious because he fears getting his heart broken.

He needs an extremely loyal partner who he can trust implicitly. For a Cancer guy, loyalty is more than just being faithful in a monogamous relationship.

It’s also about taking his side in arguments and always having his back when he needs her. He needs a woman who will be his teammate as well as his lover.

Some zodiac signs value practicality and realism in a partner, and while a Cancer man admires these traits and recognizes their value, he is more attracted to a creative, innovative woman.

He loves a woman with an artistic side. If you want to attract a Cancer guy, don’t be afraid to show off any creative talent you may have, such as painting, dancing, or singing.

A Cancer man encourages his partner to express herself in every way, and he adores it when she communicates by creating something beautiful.

Each astrological sign is guided by a particular celestial body that shows us something significant about that sign. Most signs are ruled by a planet, but Cancer is governed by the mysterious moon.

In astrology, the moon is a symbol of emotions, femininity, maternity, and comfort. If you date a Cancer man, you never have to hide your emotions or worry that he won’t understand how you feel.

Cancer is one of the most emotional signs of the zodiac, so being with an emotional, temperamental woman doesn’t scare him.

He is more than happy to listen to his partner talk about her feelings, and he will patiently help her analyze and explore her emotions.

He can be quite emotional, too, so he is looking for a partner who can understand and appreciate his sensitivity.

Cancer is a very romantic sign, so a Cancer guy won’t be happy in a relationship that lacks passion and romance.

He loves traditional romantic gestures, like bringing his date a bouquet of red roses or taking a horse-drawn carriage ride in the moonlight.

He wants a partner who will reciprocate these gestures and makes a conscious effort to keep the spark in their relationship alive.

If you’re dating a Cancer man, don’t shy away from sweet, romantic gestures. Writing him love letters, slipping cute notes into his pocket, or surprising him with little tokens of affection are sure ways to melt his heart.

A Cancer man wants a lady who is not only passionate about their relationship but also about something important to her.

He doesn’t have to share her passion and it doesn’t matter what her cause or hobby is; he just wants his partner to have something in her life that makes her excited and gives her purpose.

Cancer is known as “the Mother” of the zodiac, and a Cancer man is very protective and paternal.

Most Cancer men are traditional and want to have a family. They are exceptionally close to their parents and other relatives, and they look forward to settling down with a partner and having children of their own.

A Cancer guy needs to be with a family-oriented woman who wants the same lifestyle he does. She should eagerly anticipate parenthood and make an effort to get close to his family, as well.

Each zodiac sign rules a house of the zodiac that conveys that sign’s strengths and values. Cancer rules the fourth house, which is the house of the home, family, and emotions.

This tells us that a Cancer guy is a homebody and he is happiest with a partner who likes to stay home as much as he does.

He’s not antisocial; in fact, he loves being surrounded by his loved ones. But he is the most comfortable in his own environment, with his favorite people and possessions.

A Cancer guy also wants a partner who will help him create a beautiful, cozy living space. Since he enjoys spending so much time there, he wants his home to be warm and inviting.

He will either be very protective of his personal space and not want to have people over to his house very often, or he will strongly prefer entertaining from home because it’s where he shines. Either way, his house is his sanctuary, and he wants it to be a sacred space.

Some astrological signs don’t need a lot of physical touch from their partners, and they hate public displays of affection. But a Cancer man craves affection and needs it to feel secure and loved in a relationship.

A Cancer guy is very touchy-feely. He is the type of person who expresses himself through touches, such as greeting others with a warm hug and a kiss on the cheek.

Holding hands, hugging, or even just sitting next to each other is important to a Cancer guy in a relationship. He won’t be happy with a cold, aloof woman who doesn’t like kissing in public or cuddling in bed at night.

He’s attracted to a woman who expresses her love through physical affection, just like he does. Don’t shy away from a Cancer man’s touch when he is affectionate with you and make an effort to make physical contact with him to show him how much you like him.

As I mentioned at the beginning of this article, check out Anna Kovach’s book, Cancer Man Secrets, for more in-depth training for women who want a Cancer man to chase and desire them.

I thought Annas book was insightful and had info in there that I hadn’t considered. Let me know what you think, I’d love to get your feedback!

What a Cancer man likes in a woman, in a nutshell…

Whether you want to date a Cancer man yourself or you’re hoping to set him up with his perfect match, you need to know what he’s attracted to in a woman.

A Cancer guy likes a sensitive, sweet, and passionate woman. She should be as traditional and romantic as he is, with a strong sense of loyalty and the desire to start a family.

If you are an emotional, loving, and intuitive lady, then a Cancer man could be the ideal partner for you. 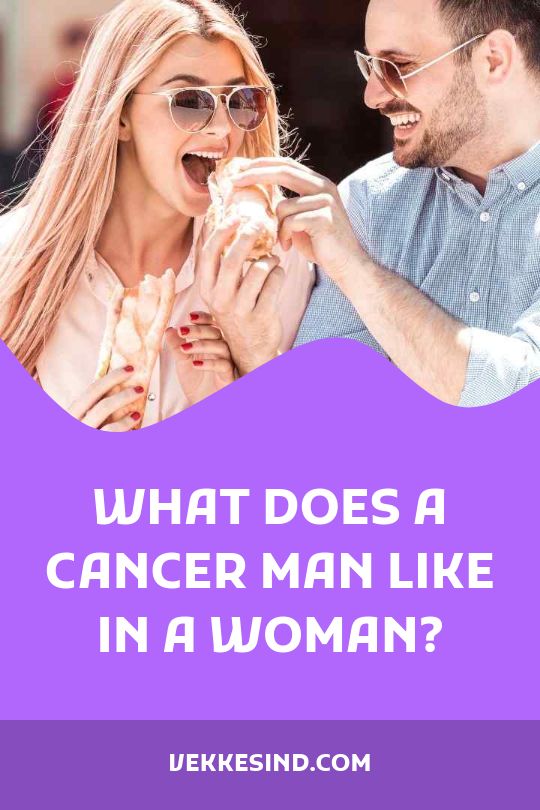 This article both made me laugh, giggle and blush! I enjoyed it thoroughly and... I feel I have so many of those qualities!! And so many of the qualities I want in a man, he has!! The only issue I have is loyalty! So that's a big one! As a social butterfly and a bit of a flirt, it's a bit of a challenge! But how can you resist a man who is so romantic! Traditional! And totally devoted and caring!!

How To Text A Cancer Man? – Vekke Sind