Ok, let’s go… When the Scorpio woman meets an Aries man, it is always about seeking power. They may either come together and make a powerful duo or become competitive with each other. The pair enjoys an enduring relationship.

The Scorpio woman and Aries man in marriage are like too much food on a plate that you can’t finish. They overwhelm one another. Together, they seem powerful but tend to trigger the other, even if it’s not their intention. It is the kind of relationship that’s not for everyone but rewarding if they make it work.

The Aries man and Scorpio woman always have an attraction to one another. Traditionally both signs share the ruler of Mars. Their approach is different. The Scorpio woman tends to plan strategically before striking whilst the Aries man charges ahead.

The Scorpio woman demands intimacy. Though ironically, she makes it harder for herself to achieve this. She is naturally skeptical about her relationships. She may judge someone first and try to get them alone to get to know them. Trust doesn’t come easily to her.

This is a pair that is ride or die. The two can be extremely devoted in their relationships. It might be interesting to see their dynamic as both can be possessive and jealous. Toxicity is a normality in the relationship but they love it.

It is important to strengthen the foundations of trust and maintain clear communication. Their only downfall is when one person starts to doubt the other. They can be greatly devoted to a relationship but the Scorpio woman wants to feel assurance and feel safe from betrayal. If it doesn’t work between them, it is very easy to cut ties and pretend they never met.

The Scorpio woman wants to make love emotionally. Though she can be fine with having sex for the sake of it, she would still prefer to do it with someone who’s in it for the long run. When these needs are met, they make love like an explosion.

The two signs can be freaks of nature. The Aries man will make love physically which the Scorpio woman may not always appreciate. Still, they make the best of these encounters and they’re probably the couple that loves whips and chains too.

For 7 tips to turn on your Scorpio woman in bed, click here!

They could be great friends, though it would be a bit of adjustment for the Scorpio woman who is sensitive even when she puts up a poker face. It is crazy how many emotions she suppresses in the name of staying in control.

The two may struggle about emotion generally because both are ruled by Mars, the planet of aggression and action. There is an emphasis on putting a strong face and asserting dominance in any situation. They would benefit to have a middle person that can talk to one side and give them understanding when they are frustrated with each other.

In love, the Aries man keeps it playful and it is often the Scorpio woman who is more reserved and serious. This relationship will not survive without willpower from both ends. The two of them both want to be in a position of power and can be ambitious. This can work well in their favor if they want it hard enough.

Of course, there are issues they have to watch out for. The Aries man doesn’t think a lot of what he’s about to say which can wound the Scorpio woman. The two of them want to insist they’re right so there’s less willingness to compromise.

They will have intense feelings that may either make or break them. The Scorpio woman and Aries man happen to be jealous and possessive lovers too. They should be aware of how to lower their demands on one another and to allow space.

Another potential downfall is the different views when it comes to money. Scorpio prefers to be in control and will therefore have the tendency to save every penny. This will be difficult if it’s the Aries man because sometimes he spends just for the sake of the thrill.

The main difference is that even though they’re both determined and passionate individuals, the Aries man is a cardinal sign which means he is more of a starter whilst the Scorpio woman will stay in the end if she finds a purpose in it. If they want to be together until the end, they have to work for it, there’s no other way.

Does a Scorpio woman and Aries man work, is it a good combination?

The Scorpio woman and Aries man is a good combination but it’s not always a success story. The problem lies in their personalities as fighters. Sometimes their approach rubs the other person the wrong way. There might be a lot of fights over the relationship if they don’t nurture one another consistently.

Marriage between a Scorpio woman and Aries man, In summary…

The Scorpio woman and Aries man are an intoxicating couple. Even when they’re not together, the power exudes. The two signs are independent and determined. One likes to be in control and the other likes to initiate.

The Scorpio woman is the reserved strategist, she acts like a silent killer whilst the Aries man is someone who’s brutally honest and will charge head-on. Even though they have similar traits, their approach is what makes it tricky and what can frustrate one another.

They need to look out for a middle ground when it comes to finances and to remember to have clear communication. It Is a ride-or-die relationship. If they don’t make it they can easily forget the existence of the other and move on as nothing happened.

The Scorpio woman and Aries man in marriage can work but not without its difficulties. If they are able to resolve their differences and take turns in taking authority. Who knows how intimidating their partnership can be. 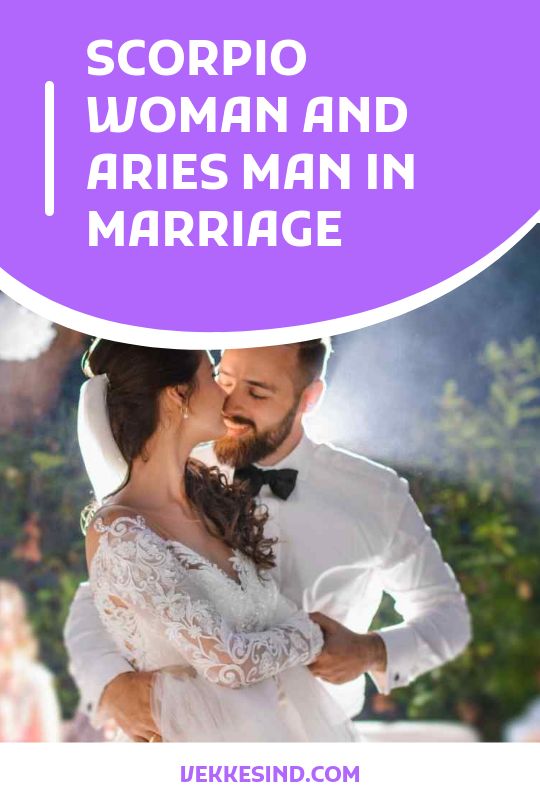