The Scorpio woman is mysterious, ambitious, and private. She invests in self-improvement and always looks toward transforming herself and does not allow limitations to stop her. She is sweet but also psycho. The Scorpio woman is like a female soldier, she sees relationships as a battle to be won and conquered.

When a Scorpio woman is done with you, she will disappear from your life. She may suddenly cut ties not only with you but common contacts. She may also give you the silent treatment and if you try and push yourself to her, she may bring out a more aggressive side to her.

That said, let’s see what it look likes when a Scorpio woman is in love…

The Scorpio woman in love

When a Scorpio woman falls in love, she would want to have time alone with you. She wants to experience you privately. She wants to get to know you without the opinions of the people around you. When she wants someone, you will feel her intensity as if she is giving you a love bombing.

The Scorpio woman will be observant of your habits. She may take note of your favorite colors or habits. She may secretly stalk you online or indirectly get to know you through common friends. She will become jealous when someone else spends time with you.

Another way to tell when a Scorpio woman likes someone is when you catch her looking at you. The Scorpio woman will not be embarrassed. Scorpio placements can pride themselves on their captivating eyes and remains focused only on you despite the crowd.

She may decide to drop hints and she shows happiness when you are together. The Scorpio woman in love will be sensitive towards you. As a partner, the Scorpio woman is loyal and supportive. A great motto on how a Scorpio woman loves is found in Greek Mythology’s god of the underworld, Hades, where he says to Persephone, “Darling, I would burn this world for you.”

How to tell when a Scorpio woman has moved on

She becomes difficult and oppressive

The Scorpio woman in love can move mountains for her partner if she tried. It is interesting when it is about separation. You see, Scorpio is a sign that has a hard time letting go of someone she loves. For a fixed sign, she sees her partner as a part of her, kind of like owning a property, but she is not objectifying you, she simply believes you belong to her.

When you are adamant about breaking up with a Scorpio woman, she may become manipulative and controlling. It’s as if she will suffocate you so that you would renew your vows. Her possessive nature will get on the loose. Even if she is slowly realizing you may be incompatible with her, she could attempt trying to restart the relationship.

Whatever the outcome, when you leave the Scorpio woman, she will become resentful of you. She may treat you terribly until she has totally let go in which she totally disappears from your life as if you never existed, to begin with.

There is nothing like the wrath of a Scorpio woman. You can expect that she collects receipts and every detail that can be used against you. She might publicly defame you or enjoy mocking you. You might have some concerns and she will just invalidate them.

When a Scorpio woman is done with you, she makes fun of you and makes you feel small about yourself. She is unable to respect you and you may find that her treatment will be increasingly worse as time passes yet if you decide to give her a taste of her own medicine. She will give you war.

She is not able to let go

When a Scorpio woman moves on, she will be your number one critique. When you are unable to fulfill something, you said you would do, you might not hear the end of it. She is the type to want to keep a toxic relationship just so she can keep tabs with you.

If infidelity was involved and she was the one betrayed, things will change forever. It can never be the same. Naturally, Scorpio as a sign already is a skeptic and is on the lookout for reasons not to trust someone, more so if you have proven it.

Even if you have parted ways, she will keep you on a list of special people she loves to hate with all her heart. Scorpio women never truly move on, they just adjust and reincarnate to a better version of themselves.

She doesn’t stare at you anymore

A Scorpio woman can be a hopeless romantic. When she loves someone, she loves observing him. She may start becoming distant slowly and gradually. Other times, it will be sudden. From such a passionate sign, she will let you feel how cold she can be.

When a Scorpio woman finally moves on, consider it as a death. It would never be the same, even if somehow you have made it work with her and restore the relationship it won’t be like the first time you’ve met. You will miss that part of her that admired you and made you feel like you won the lottery.

She makes no kind of effort to make it work

When a Scorpio woman doesn’t care, it doesn’t matter if it appears rude, she just simply can’t be brought to do things she doesn’t like. Those little details that she memorized about you are left to collect dust. She will not communicate and refuses to compromise.

It could be her way of saying that she is ready to move forward towards a new love. She knows she could love again and that the past is behind her. When a Scorpio woman does this, she has already taken a lot of strength to get over you.

She sees other guys for fun

Scorpio women can be queens of detachment. She is open to short-lived flings and it will not mean she would fall in love. It is her way of rebelling that the relationship is already dead. She doesn’t have the security that she had with you and it is almost self-destructive.

Sometimes it leads her to feel insecure about herself. If there is one thing Scorpio craves, it is intimacy. For them, being able to hook up with someone does not mean they got to know the real her, it was simply a night of fun and sin that she used to distract herself from losing you.

She doesn’t want to see you

When a Scorpio woman is in love, she will make time for you no matter how busy she can get. You are one of her priorities and is looking forward to cuddling with you. She likes it better when she has you alone than being in a group outing.

She won’t even bother stalking your social media. The Scorpio woman who has lost her feelings wants nothing to do with the person who broke her heart. She will remove herself from your friends and maybe remove your family as contacts just to show how much she wants you gone from her life.

When your Scorpio woman is done with you, final thoughts…

The Scorpio woman is done with you when she is detached. She does not make an effort to stay in touch and may gradually disappear from your life. The Scorpio woman will cut all cords from your friends and family just to make a point of this, sometimes she does this suddenly when you least expect it.

Scorpio is a sign that does not move on easily and relationships are something they want to protect with everything they have. The Scorpio woman may allow herself to stay in a relationship that she does not feel happy with just for her to keep you miserable. She does not mind dealing with the toxicity as long as it means you will not be with anyone else other than her. 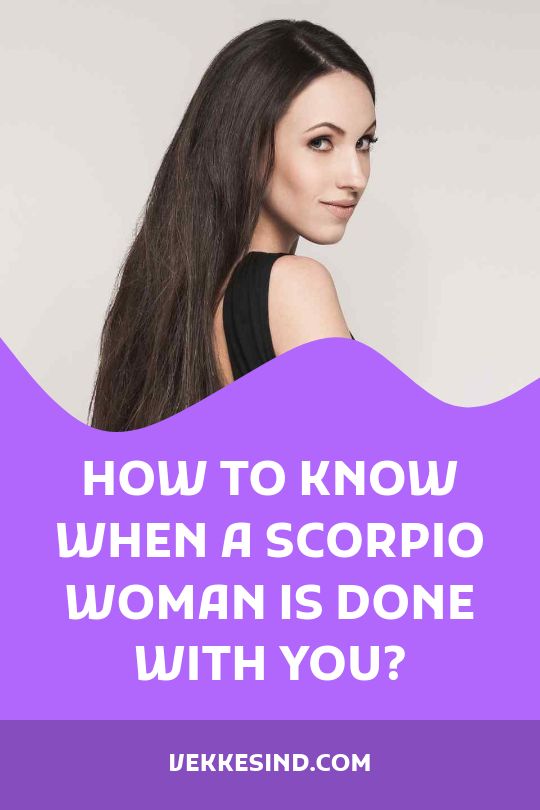