The Scorpio woman is often mistaken to be one of the fire signs because of her boldness and comfort in taking charge. She is private yet she presents herself as someone who looks like she’s in control. Many times she is misunderstood because of her mysterious behavior but she is actually a person who is brutally straightforward and will tell you about things as they are.

The Scorpio woman in marriage is a faithful and intensely passionate union. The Scorpio wife will express her love in depths and through action. She is always an extremist in her relationships because she takes everything seriously. If it’s a lifetime you’re seeking, you have high hopes when you marry a Scorpio woman.

The Scorpio woman in courtship

The Scorpio woman in love is mysterious. She never truly shows what she is feeling inside. She may seem perfectly in control and independent but she is intense when it comes to her inner thoughts and feelings.

The Scorpio woman looks for a partner that is able to understand her without her having to utter a word. She wants to be acknowledged and validated by her man. In relationships, she may be jealous and possessive but she will not mind if you are also very careful about her.

For the Scorpio woman, it would be best if you avoided giving her reasons to be jealous. She does not handle her emotions very well. When she is hurt, she can be cunning and creative in getting her revenge. She would be the type to believe in the saying, an eye for an eye or a tooth for a tooth.

She is independent and can take of herself but as a woman, she would still desire to be protected and valued. She wants to be able to experience intimacy in a way that she can be fully vulnerable and allow herself to put her guard down.

When those needs are met, the Scorpio woman will be the most faithful and devoted partner a man can wish for. She is sensual, passionate, and takes everything she does obsessively. The Scorpio woman knows her worth and boundaries. She will not be the type to rush for love. Her happiness relies on the most priceless things, the details of life that many overlook.

OK, let’s look at marriage with a Scorpio woman…

Marriage with a Scorpio woman

The Scorpio wife can be controlling

The Scorpio wife will enjoy having a form of authority at home. She appreciates being in control and dislikes being told what to do by others. She is often described as aggressive. Her zodiac sign is always associated with the desire for power and immortality because they’re always able to rise from the ashes just like with the phoenix.

The Scorpio wife also has a habit of secrecy. Though she has no intentions of betraying the man she loves the most, it is just her nature to have something hidden. What’s good about it is that you can tell her a secret and she would die with it. She is very private when it comes to her personal life and will respect yours too.

The Scorpio wife is an excellent caretaker

As aggressive as she seems, she is also innately nurturing. The Scorpio wife is deeply emotional and appreciates tradition. When children come along, she will teach them independence and resilient strength. For the Scorpio mother, it is all about being able to survive anything.

She would also display her overprotective characteristic. No one is more intimidating than an angry Scorpio woman defending her loved ones from those who try to threaten them. She can be diabolic in her revenge schemes. There’s no telling how she will execute them but it always ends up being a cautionary tale.

The Scorpio wife will have a fruitful career

The Scorpio wife would do better to have a career rather than to stay as a domestic housewife. She is too ambitious and determined to let it go to waste. She is also very dominant and would do well in controlling situations. She may be good as an analyst, something to do with investigations. Small details do not pass by her because she thinks how the culprit would.

She is also too competitive to just be kept at home. She wants to prove something, achieve something. Though if she chooses to remain at home, she can also be comfortable given that she can fully be herself without having to raise her to guard up all the time. Though it is expected she might keep herself busy by putting a business or having a home-based income.

The Scorpio wife can be flirtatious

It will be unfair that the Scorpio wife is jealous, possessive, vindictive when scorned and yet she is truly fine with being flirtatious. She would tell you it is not her fault that she is naturally sensuous and she knows she attracts men like flies.

The Scorpio wife is also more sensual than most signs. She is basically a succubus in human form. She will dominate you and make you say things that worship her. If it’s experimental you want, she will give it to you and exceed what you expect. For the Scorpio wife, a pleasureless marriage is a hopeless marriage.

Though you can have the assurance that If she chooses to love you, her eyes may look out of curiosity but she will never take the bite. There is no one more loyal and devoted than a Scorpio wife. If you treat her well and she feels that she is loved, then maybe she would even exceed this lifetime and wait for you in the afterlife.

The Scorpio wife can be very selective even before marriage. She keeps her circle small. She allows an exclusive few to get to know her in an intimate way. She knows how to conserve her energy and resources.

She is very careful with the words she lets out of her mouth. She knows the power that it holds and she may also use the very same words to manipulate others to her will. If there is a zodiac sign that is more aware of consequences, Scorpio will be one of them.

Sometimes she may choose to isolate herself to regain control of herself rather than seeing herself lose it. She also might be considered paranoid but as she is intuitive, she is rarely wrong about her judgments on people. The Scorpio wife is a natural in reverse psychology.

If you want to wish yourself an early death, hopefully not literal, don’t play with a Scorpio’s emotions. She asks you to trust her when she needs to be alone.

The Scorpio wife is firm about her beliefs and boundaries

The Scorpio wife is not for the weak. She can be difficult to deal with and oftentimes, she is easily misunderstood. Even if you are married, she never truly shows a hundred percent of her, there’s always a characteristic that she will surprise you with.

Despite her tough exterior, she can actually be very insecure. She doesn’t want to see you having attention from others especially if they are flirting with you. She will not be able to tolerate it if she sees her husband entertaining them.

As she is a scorpion, she will not hesitate to use her stingers to protect herself from those who try to bend them to their will. The Scorpio wife is strong-willed and if there are any obstacles, she will rely on her problem-solving skills until she gets what she wants.

The Scorpio wife will always be ambitious

When you are with a Scorpio wife, you will always be challenged to evolve into a greater version of yourself. In fact, Scorpios represent transformation through death and rebirth. It’s no wonder they are always visualized through skulls and coffins. She is a force that cannot be stopped.

As her partner, she wants you to be your best self. As she works hard, so should you. The Scorpio wife looks for the ideal man that is similar to an Alpha male or a tough masculine character. If she has married you, she would have certainly seen that potential about you.

The Scorpio wife is ambitious and wouldn’t settle for you if she didn’t see your gifts and talents. She would always choose the best but can be difficult when she is feeling too competitive. Oftentimes, this causes her to be impatient and become dominant to her partner.

There is certainly nothing wrong with being your best self but sometimes with the Scorpio wife, she wants to win so badly even if it means costing her more. Nothing is casual with her, it’s always all or nothing.

Marriage to your Scorpio woman, in a nutshell…

The Scorpio woman in marriage is either the best thing or the worse thing you can ever have in your life. She makes the most devoted, strong-willed wife.  She is determined and fixed. Once she makes up her mind that she will be yours, nothing can change her mind.

Of course, it’s if you are able to assure her of your exclusive loyalty and honesty. The Scorpio wife can be demanding and controlling. To marry her is not a walk in the park but you do reap its benefits. When she becomes a mother, she will teach your children how to survive by teaching them of their own strengths and independence.

When you marry her, there’s no looking back. There is a saying, no wrath like a woman scorned but it’s even worse if it’s with a Scorpio woman. She will not just be able to fight physically but will also be able to exploit her enemies’ weaknesses and execute her plans in a way that does not track back to her.

For the Scorpio wife, she is not a backup plan or a second choice. Put her first and she will reward you with a powerful partner that can withstand any obstacle to be by your side even beyond this lifetime. 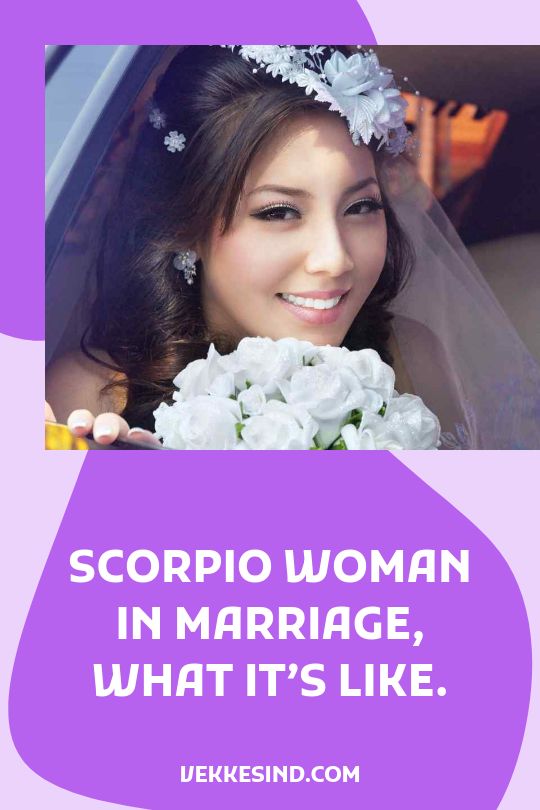