The Leo woman is confident and independent. She is able to shine her light on others. She may have difficulty admitting failures and have a desire to be held in high regard.

The Leo woman is a natural leader that you can rely on for encouragement. She is a personality that does not give up and knows how to pick herself up so no one has to.

The Leo woman is done with you when she is already seeing other guys. She may have already begun to flirt with someone else and there Is no excitement when she sees you. She puts you last or worse, to no room in her life at all.

That said, let’s see what it look likes when a Leo woman is in love…

The Leo woman in love

The Leo woman loves to show the world how much she loves someone. She is a generous lover and enjoys spoiling the person she loves with gifts and attention. You can guarantee that even if she has a busy schedule, she will still be able to make space for you on her list.

However, Leo women are regal. She is demanding and that means she may have high expectations of her partner. For her, she only deserves the best because she sees herself as the best. If there is one thing you shouldn’t underestimate, it’s the Leo woman’s self-confidence.

Even though Leo can have quite an ego, they also tend to have good intentions most of the time. They don’t mind doing things for the good of all. You can feel at ease when a Leo woman is your lover, she will be trustworthy and reliable but it is different if you have earned her wrath.

The Leo woman in love has to have some form of control. She is a natural boss and dislikes having to adjust to anyone’s demands. For her, she is the one that should be in charge.

When you decide to be with a Leo woman, you have to keep in mind she is a priority and she will not settle as an option. This sign can prove difficult to get back after separation.

How to tell when a Leo woman has moved on

She is no longer excited about the relationship

The Leo woman in love needs to feel like she is the center of the person’s world. If she thinks you are putting others above her as a priority, she can feel a bit disappointed. Attention is what makes the Leo woman’s life sweeter.

When a Leo woman is done with you, she doesn’t pay attention to you. She might be with you but her mind is occupied with other things. At a social gathering, she might make an effort to talk to new people rather than making the most of the moment with you.

A Leo woman may be demanding but she is also understanding especially when she cares about the feelings of someone she loves. When she no longer cares about the relationship, she will see details that she usually overlooks.

The Leo woman will make you feel guilty or as if you have never done enough. She will find something to blame about and it will be on you. A happy Leo woman is optimistic and feels like she can do anything. She refuses to let negativity hold her down for too long.

When she finds that she always thinks negatively around you, that’s a giveaway that your Leo woman is moving on emotionally and is preparing to leave you.

She will tell you directly

The Leo woman she’s herself as a prize to be fought for. She does not believe anyone would have wanted to break up with her. If you do initiate the breakup, this would confuse her and maybe earn her resentment over time.

It will not be easy for her to accept that you don’t want her. You can definitely expect tantrums with a hurt Leo woman. Just make sure that this is truly what you want because once you break up with her, then she will see you in the next life.

If the Leo woman was the one who said she wants to leave it may have been because you might have made her feel like an outcast in a crowd. Being isolated from a circle is a huge non-negotiable for a Leo woman. Maybe she thinks you do not pay attention to what she likes or she does not feel appreciated.

When a Leo woman breaks up, it Is good not to take the first threat too seriously. Leo women are still fixed signs and are determined to make things work. Many times, she is just seeking your attention and if you failed to show her that, maybe she’ll give you up for good. She knows she’s a snack and she can claim a new man if she wanted to.

When a Leo woman still cares, she will remain honest. She doesn’t have to lie about liking someone. They put honesty on a pedestal.

She is not even flirting with you anymore

The Leo woman likes to receive compliments and enjoys flirting back. The fact that she is no longer playful in the relationship is a red flag. Leo women are still energized by the element of fire. It’s all about passion, they want to feel inspired and want to live life to the fullest.

A Leo woman that is not flirting is what it is, she is not interested. When she likes someone she embodies the lion and makes a leap for it. There is no effort on her part. Normally her love language may include gift-giving, but you won’t even see that anymore.

When things become too serious that they cannot express their joys around you, the Leo woman will find it too burdensome. If the Leo woman cares enough to make it work, she might find a way to make things exciting, the lack of effort on her part, says it all.

She flirts with someone else other than you

Even worse is when a Leo woman would do when she’s done with you is flirting with others. Basically, she is looking towards something new. Why would a Leo woman flirt with someone that she doesn’t view romantically or even playfully?

You may notice she never asks you to join her with her friends. If she wanted you in her life, she would make everybody know that she’s taken. The Leo woman is proud, she is like the peacock strutting her feathers when she likes you.

It would feel like even if you manage to go out with her, she is still looking at other men in the market.

She does not make time for you

The Leo woman in love will move mountains to make time for someone she loves. The fact that she makes excuses or purposely keeps herself full may mean she has no intention of spending time with you. The thing is, even if there’s some truth that she’s occupied, this is a Leo woman we’re talking about. If she wants to see you, she will make it happen.

This could manifest in a Leo woman saying one thing then she’ll proceed to do something else. She becomes flaky; Leo women can have an issue with their pride, she will not adjust for someone else’s feelings or how it would hurt someone especially when she does not see you as anything special in her life.

If it’s starting to seem like you’re the one initiating contact only for her never to view the message or it takes weeks for her to check it out, that’s a sign she doesn’t want to restart the relationship.

The Leo woman is never shy from reaching out to a person she likes more so on the person she is dedicated to.

When your Leo woman is done with you, in a nutshell…

The Leo woman is done with you when she is already seeing other people. Even if she agrees in meeting up with you, it will feel like she is still shopping for different men in the market. It will feel different. The Leo woman no longer spoils you with attention or gifts.

She stops flirting with you and excuses about not being able to make it become more common. The Leo woman will avoid bringing you with her friends and you always end up being the person to message first.

The Leo woman is a dedicated lover, being a fixed sign, she also proves to be very loyal and reliable however when things don’t go as planned, she is one of the most difficult signs to get back. 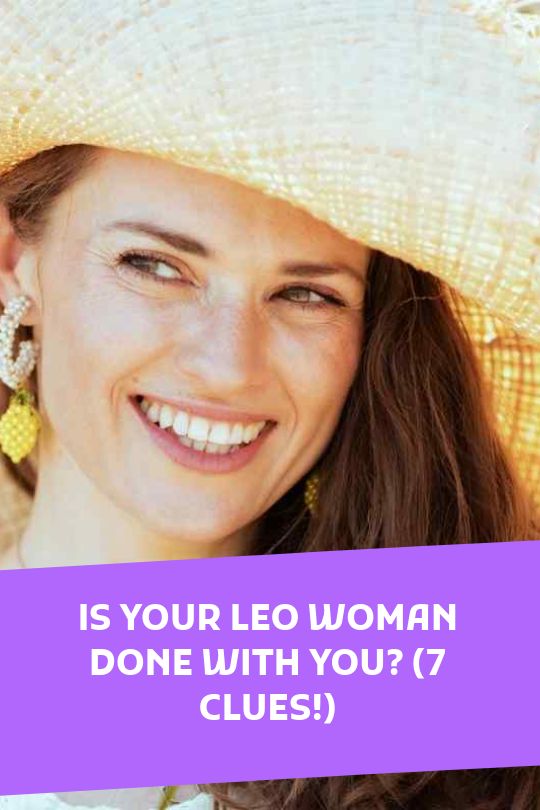