If you want to attract a Capricorn guy, then you need to understand what his zodiac sign looks for in a woman.

A Capricorn man likes a refined, mysterious woman. She should have a strong worth ethic and be cautious and intelligent. He needs a woman who is as logical and practical as he is, and his ideal partner must be loyal and trustworthy.

If you are looking for more in-depth training to attract and keep a Capricorn man, then I’d suggest you check out “Sextrologist” and zodiac-based dating expert Anna Kovach’s book Capricorn Man Secrets. Her program doesn’t specifically discuss “Capricorn women”, but does offer effective insights and tactics that I haven’t seen anywhere else.

10 Characteristics a Capricorn Man Loves in a Woman

Every zodiac sign has a different type of look that they are most attracted to, and a Capricorn man adores a classy, refined lady.

He is drawn to a woman who looks put-together and elegant. If you want to lure a Capricorn man, put on a simple, sleek black dress, and do your hair and makeup perfectly.

He’s not as impressed by a girl who goes around wearing wrinkly, casual clothes, and he prefers a woman who takes pride in her appearance and grooming.

Make sure you look your best and pay attention to the details of your appearance when you are planning on seeing your Capricorn guy. Looking clean, stylish, and modest is important to this critical and meticulous zodiac sign.

Some astrological signs are drawn to quirky or androgenous looks, but Capricorn is not one of those signs.

A Capricorn man is attracted to a hyper-feminine woman. He likes seeing his lady in dresses, skirts, jewelry, and high heels.

He loves it when a woman wears her hair long to accentuate her femininity, and he appreciates figure-hugging outfits that hint at a womanly shape.

Don’t go overboard trying to show off your curves, though. A Capricorn man likes a modest woman, so try not to reveal too much skin.

Although he tries to be tactful and gracious, a Capricorn man can be brutally honest. He is incapable of lying, but sometimes the truth can be just as hurtful as a little white lie.

Trust is important to a Capricorn man in a relationship. He has a hard time opening up and being vulnerable, and if his partner has given him any reason to distrust her, his guard comes up even more.

He would rather have a partner who is harshly honest than someone who lies to him, no matter how small the lie is. To him, it’s more important to be truthful than to spare someone’s feelings.

A Capricorn man needs a completely honest woman because if he catches her in a lie even once, it can be nearly impossible for him to trust her again.

Some men like a woman who puts herself out there for the world to see, but not a Capricorn guy.

He is much more drawn to a reserved, mysterious woman than the person who is getting all of the attention and is the life of the party.

He’s a bit of a wallflower himself, even though he has a steady, commanding presence. He thinks that people who call too much attention to themselves are obnoxious or untrustworthy.

A Capricorn man prefers a lady who keeps some things to herself. She shouldn’t be sneaky or secretive, but she should be modest and allow others to shine instead of being ostentatious and begging for attention.

The elements reveal a lot about the character and disposition of the signs. Capricorn is an earth sign, and earth signs are known for being stable, grounded, and dependable.

A Capricorn man values reliability far more than spontaneity in a partner. He would rather be with a woman he can count on than someone full of surprises.

This doesn’t mean that you should never surprise a Capricorn guy. But for him to trust you, he needs to be able to count on you and predict your behavior most of the time.

He wants to know that you’ll have his back when he needs you, and he must have a strong sense of who you are before he commits to you.

If you never answer the phone when he calls or you have wildly unpredictable mood swings, he won’t feel like he can trust you with his heart.

Some zodiac signs like it when a woman is carefree and impulsive, but a Capricorn man needs someone who is as careful and cautious as he is.

A Capricorn man is very deliberate in everything he does. He makes decisions carefully after doing thorough research, and he likes to make plans instead of doing anything on a whim.

All of the earth element zodiac signs are hard-working, but Capricorn might be the most hard-working of them all.

A Capricorn man has a strong work ethic, and he wants a woman who works as hard as he does so she can understand and relate to his priorities.

Having a successful career is important to a Capricorn man because he cares what others think of him and his job is his passion.

He sometimes struggles in romantic relationships because he tends to put his job before anything else, even his partner.

He is happy to be the provider of the family, but he can’t stand to have a lazy partner. She should work hard at her own job, be a dedicated housewife, or at least pursue her hobbies and other projects enthusiastically.

She shouldn’t complain or make him feel guilty when he stays late at the office. Instead, she should be impressed that he works so hard and tell him how proud of him she is.

If she doesn’t have a career of her own, then she should strive to make his life as easy as possible when he’s not working. For example, a Capricorn man’s partner could help him by doing chores around the house or preparing meals for him.

He is a traditional guy, so he likes being the breadwinner as long as his partner contributes something to the relationship, as well.

His ideal woman should know that his free time is scarce, and she should make the most of it by being kind and romantic instead of whining that he works too much.

A Capricorn man has many amazing qualities, but being in touch with his feelings is not one of them. He is far more practical than emotional, and he always thinks with his head instead of his heart.

Because he struggles with emotional expression, a Capricorn man needs to be with someone logical and rational. He dislikes big, dramatic displays of emotion, and he would rather be with a level-headed lady than someone with drastic mood swings.

A Capricorn guy is direct and straightforward, so he needs a partner who expresses herself similarly. He can’t read his partner’s mind or intuit how she feels, so she needs to be upfront if she has an emotional issue with him.

Although a Capricorn man likes to spoil his loved ones, he is very careful with his finances. He is good at managing his money, so he is excellent at earning, saving, and investing.

It makes him nervous when a woman is too reckless with her spending or doesn’t plan for her financial future.

He is more impressed by a woman with a strict budget and a healthy savings account than someone who squanders her earnings on frivolous things.

A Capricorn man is looking for a life partner who shares his frugality, so having similar spending habits is important to him.

A Capricorn man doesn’t mind being the more intelligent person in his relationship, but he can’t be attracted to a woman he considers dull or dim-witted.

He is attracted to a woman who values education and can carry a conversation on any topic. He dislikes it when someone pretends to be more naive or unintelligent than she really is.

If you want to attract a Capricorn guy, don’t be afraid to show off how smart you are. Tell him about the books you like, the classes you’ve been taking, and or the mental exercises you do to train your brain.

As I mentioned at the beginning of this article, check out Anna Kovach’s book, Capricorn Man Secrets, for more in-depth training for women who want a Capricorn man to chase and desire her.

Marni’s “hot girl teaches you how to get other hot girls” program has stuff that NO ONE talks about! Go through her entire program, it’s filled with so many gold nuggets and good actionable advice.

What a Capricorn man likes in a woman, final thoughts…

A Capricorn man is very selective when it comes to choosing a romantic partner because he is careful and patient about everything he does. He doesn’t want to get his heart broken by giving it to the wrong woman, so he has a list of specific traits he looks for in a partner.

A Capricorn man is attracted to a smart, conservative, and hard-working woman. She should be more logical than emotional, and she has to be completely honest and direct. His ideal partner should be elegant and mysterious, and she should bring out his masculinity by being very feminine.

If you possess all of the qualities this zodiac sign is looking for in a woman, then you might be the perfect partner for a Capricorn guy. 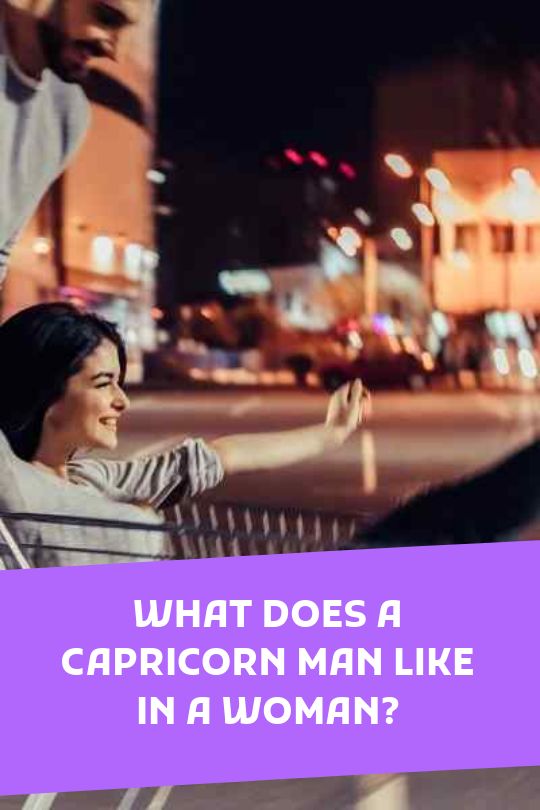