Thought to be vanilla in bed with no flavor at all, it can be a little scary to want to pursue a Capricorn man because of course, you need to be pleasured and satisfy your sexual cravings. So, this article is for you to get to know your Capricorn man and how you can turn him on.

To turn your Capricorn man on, you need to look at him differently. Do not dirty talk but express your admiration by looking through his eyes. Be patient, and do not be too wild. Allow him to be dominant but make the first move. Finally, always look your best. You need to prepare yourself before the session.

For more (in-depth) details about your Capricorn man, then also check out “Capricorn Man Secrets“.

Before you do that… I’ve got a lot more to share here! Let’s go!

Although your Capricorn man is known to be very controlled and disciplined, it is a misconception that he is total vanilla in the bedroom. He is all about his work and all about his goals, and when he gets down to business, he becomes a little bit of a freak.

This is also applied in the bedroom. He is a gentleman on the streets but a freak on the sheets. Let’s get to know more about him here!

A Capricorn man in the bedroom is not promiscuous. He does not sleep with people he does not connect emotionally and intellectually with. He likes to be in control and take over the whole experience. He is also very disciplined and will want you to finish with a lot of pleasure. Expect a very pleasurable experience!

He is picky with who he sleeps with

Because of how a perfectionist he is, he just doesn’t go around and sleeps with. He does not sleep with someone that he just finds hot physically. Don’t get me wrong, he will be physically attracted but he would like his partner to have an equal amount of looks and brains.

Contrary to a popular opinion, your Capricorn man is not total vanilla in the bedroom. Although, yes, it can be boring to you at the first time, especially if you’re an Aries. There will be no experimentation at first, and this is because he wants to get to know you first before going into experimenting.

He likes to be in control

At first, it may feel like your lovemaking process may not be as exciting as you expected it to be. But if he really likes you, he will be freaky in time. You are going to succumb to him eventually. The truth is he also likes to take control in every aspect of sex. Yes, he will be fantasizing about you, and once you get there, he is going to be dominating.

He is also a perfectionist and orgasms in both parties are very important to him. When it comes to the final part of sex, he needs an orgasm to be achieved by him and you. He does not like rush sex because of the fact that he is very sensual.

As I have mentioned earlier, your Capricorn man does not just go and make love with everyone he finds hot. Even if he is thinking about sex all the time, he can go around not having sex so several months because he does not let sex manipulate him.

I’m not saying that this applies to all men out there but most of us get turned on by what they see. This is not the case for a Capricorn man. Again, you need to be able to converse with him intellectually. However, in sex, he does not like a lot of talking, and moaning and whimpering will be enough!

6 Tips to Turn On your Capricorn Man in Bed

Look at him differently

I said it before, and I’m going to say it again, your Capricorn man does not like women or men who just want him for the deed. He wants someone that is pure and honest and would want something valuable from you before even considering taking you under the sheets. He wants someone who will look at him in a wicked way.

If you are a dirty talker and want to get with a Capricorn man, I am telling you – adjust. Again, he does not like someone who talks dirty. So, what you can do to express that you really enjoy doing it with him, is look him in the eyes and make him feel it.

However, you also need to show a lot of affection and appreciation at the same time. He likes foreplays, so, get ready to have a lot of that.

Do not be too wild

The reason why a lot of people think of a Capricorn to be vanilla in sex is that he does not fantasize too much. He does not do a lot of games like roleplaying. He likes his partner to be decent and innocent. He does not like his woman to be too hard to handle.

You can dress modestly like wearing lingerie that is a bit reserved and not too revealing. Wear dresses that are just above the knee. You also need to remain calm all the time.

Allow him to be dominant

As mentioned earlier, you Capricorn man loves to be dominant and be in control of everything. This is also the same in the bedroom, and he wants you to be the submissive one.

However, do not even suggest being tied up and spanked because he is not into that kind of stuff. He is the type to guide you on what to do to completely satisfy him. But if he’s completely in control, he will know how to fully satisfy you!

Check out “Capricorn Man Secrets” for everything you ever wanted to know about your Capricorn man… (but were afraid to ask!)

Although he does not like his partner to be too freaky and nasty, he likes it when you take the initiative. He is reserved and can be a little shy. And, when you have completely made sure that he likes you, then take the first step.

But do not just go and kiss him right away to start things. You can do this by hinting at it in your conversations and looking him into his eyes. Let him know that you want to do hot things with him.

Your Capricorn man wants his partner to be well-groomed all the time. This does not mean that you always need to be looking like a runway model. Just look decent and put together even if you are just going to make love. You can seduce him by wearing a decent enough lingerie. Brush your hair and just always look your best!

Are Capricorn Men “Freaks” in Bed?

No, but they can be when he is finally reassured that he really wants to be with you. He likes to be dominant and is happy to take charge, but you cannot expect a lot of games and kinky stuff to do in the bedroom. He usually does not like bondage and sadomasochistic release.

However, you will be satisfied even without all the experimentations you expect because he prioritizes orgasms for both parties.

Your Capricorn man in bed, in a nutshell

To turn your Capricorn man on, you need to: 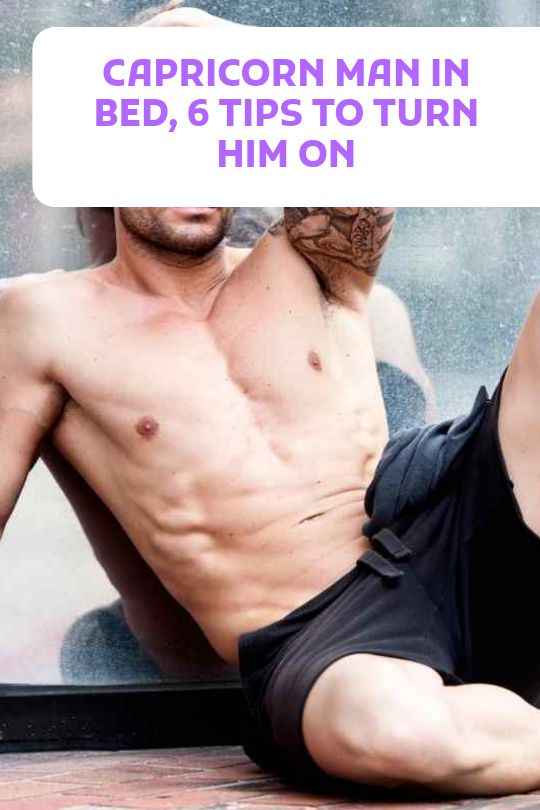