When you’re trying to impress a guy born between December 22-January 20, you need to learn how to communicate with him, including over text messages.

Your texts to a Capricorn man should be brief and concise. Avoid using emojis or a lot of extra fluffy language. Be straightforward and don’t try to play mind games with him. Texting isn’t his favorite method of communication, so it’s best if you only use texting to make plans to talk in person or on the phone.

If you are looking for in-depth training on the specific phrases that your Capricorn man will respond to, then, then check out zodiac-based relationship expert, Anna Kovach’s book Capricorn Man Secrets.

The details in Anna’s book will have your Capricorn man like putty in your hands… I’d recommend that you check it out (after you’ve read my article)!

How to Flirt With a Capricorn Man Over Text

When it comes to love, some zodiac signs like being the one pursued while others prefer to be the one conducting the chase. A Capricorn man likes to take the traditional masculine role of the chaser, but he struggles to make the first move. Don’t hesitate to reach out and send the first text message to your Capricorn crush after you’ve exchanged phone numbers.

Don’t be afraid to take the initiative with a guy born under this cautious sign, but once you’ve started the conversion, let him come to you so that he doesn’t feel dominated or emasculated.

You must also be careful not to flood him with too many messages. He will almost always respond out of politeness, even if it takes him a while, but that doesn’t mean he’s completely engaged in the conversation.

A Capricorn man isn’t the type to be addicted to his phone – unless, of course, he’s using it for work, in which case he still won’t be checking his personal text messages.

Capricorns typically prefer phone calls or in-person conversations rather than text messages, so you shouldn’t try to have any profound discussions over texts. Instead, use texting to tell him that you like him and make plans to spend time together in real life.

A Capricorn man’s approach to text flirting is perhaps best explained by his zodiac sign’s symbol. Each zodiac sign has a special symbol, usually an animal, that embodies the distinctive characteristics of that sign. Capricorn’s symbol is the sea-goat, a mythical creature that is half-goat and half-fish.

This impossible combination tells us that a Capricorn man is elusive, just like his strange, slippery, and mysterious animal symbol. Like a goat or a fish, he will climb any mountain or swim upstream through any obstacle that stands in his way to get what he wants.

Since Capricorn is one of the most driven and diligent signs of the entire zodiac, the best way to get flirty with your Capricorn crush over texts is to engage him in a discussion about his work.

When he mentions an upcoming meeting or presentation he’s preparing for, make a note to text him beforehand to show your support and encourage him. He probably won’t respond right away (because, you know, he’s working on that big presentation), but you should still text him again later to ask about how it went.

He will be flattered that you remembered the details of his crazy schedule and that you care enough to message him about it.

Before we talk about seducing your Capricorn man over text, I wanted to mention an Astrology and a quiz that I recently stumbled on…

How to Seduce a Capricorn Man Over Text

Your intentions make all the difference between flirting and seducing. You flirt when you are trying to convey romantic interest and show that you want to get to know someone better, and you seduce when you are looking for a sexual relationship.

Capricorn is one of the earth signs, and earth signs are known for being practical, grounded, and logical. Their communication style is honest and direct, with no room for subtleties or grey areas that could lead to misunderstandings.

When you wish to seduce a Capricorn guy over text, be straightforward but sophisticated. Tell him directly that you’re attracted to him and want to hook up, but don’t be crude or too explicit.

His sign’s ruling planet can also help explain how you should go about seducing this sensual guy. Just as each zodiac sign has a natural element, every sign also has a guiding heavenly body that tells us something significant about that sign’s personality. Capricorn’s ruling planet is Saturn, the planet of discipline, boundaries, and stoicism.

This means that although a Capricorn man is very sensual, he’s not an animalistic or instinctive lover. He is attracted to self-control over impulsivity and careful planning over spontaneity.

When you want to seduce him, you must give him some time to prepare. He will want to be clean, fresh, and in the right mood for your tryst.

You should also let him know that you have taken care to prepare for your rendezvous because it makes him feel more respected, which is very important to him.

Make a reservation at a luxurious hotel and text him the room number along with the date and time he should be there. Ask him to meet you at the hotel bar for a cocktail and see where things go.

That said, let’s talk about things to text a Capricorn man…

Things to Text a Capricorn Man

Regardless of your intentions towards your Capricorn crush, there are a few topics that are always smart to text him about.

Texting him about any work-related issue is sure to get a response. His career is always his first priority, so he will happily help you by texting you back his advice.

Even if you just want to be friends with your Capricorn guy, it’s always a good idea to text him to congratulate him on his latest career achievement or to support him on any of his upcoming work projects.

Text him questions that show you know how intelligent he is and what his interests are. He likes giving advice about his areas of expertise, so you can easily flatter him by asking for his opinions. Capricorns love being right, so your Capricorn crush will be thrilled when you text him to let him know that you took his recommendation.

Ultimately, the best thing to text a Capricorn guy is plans to meet in person or talk on the phone. If you say that you’re not really into texting and would prefer to see his face and hear his voice, he will recognize that he has discovered a kindred spirit and will want to get closer to you.

Why Didn’t a Capricorn Man Text Back?

Some zodiac signs will ignore your texts if you have done even the smallest thing to upset them, but Capricorn is not one of those signs.

If your Capricorn crush isn’t responding to you, don’t assume that it’s because he’s annoyed or angry with you. While it’s common for this busy guy to take some time before texting back, you would have to do something horrible to make him ghost you or shut you out completely.

He isn’t afraid to cut someone totally toxic out of his life, but he prefers to leave the doors of communication open – after all, you could become a valuable business contact in the future.

The most likely reason a Capricorn man isn’t texting you back is that he’s busy working. A Capricorn always puts work first, so don’t take it personally if he doesn’t respond to you during business hours.

Another reason why he might not text you is that he plans to respond some other way. Honestly, the best way to communicate with a Capricorn isn’t over text messages, but through a phone call or email.

Instead of texting you a message back, he might give you a call or bring up whatever you texted him about in person the next time he sees you. And if your message doesn’t include a direct question, a Capricorn may not think that it requires a response at all.

But if your Capricorn guy is ignoring you after you’ve done something obvious to upset him, he is probably taking some space to process his feelings. He dislikes big emotional displays, so he will want to handle his feelings on his own before talking to you about it.

As I mentioned at the beginning, Anna Kovach has worked with many women dating Capricorn men, check out her book. Capricorn Man Secrets.

She can give you an exact blueprint for what phrases to say to your Capricorn man in the ways that he will respond to you both physically and emotionally… click here to check out Anna’s 27 Phrases.

If you want to capture the interest of a Capricorn man’s heart, you need to know the proper way to text with him.

Texting isn’t his favorite method of communication, but you can always count on a response when you text a Capricorn guy a specific question related to work or his other interests.

Text him to show support and encourage him in his career pursuits and ask about the projects he’s working on. If you are straightforward and sincere, he will always text you back. 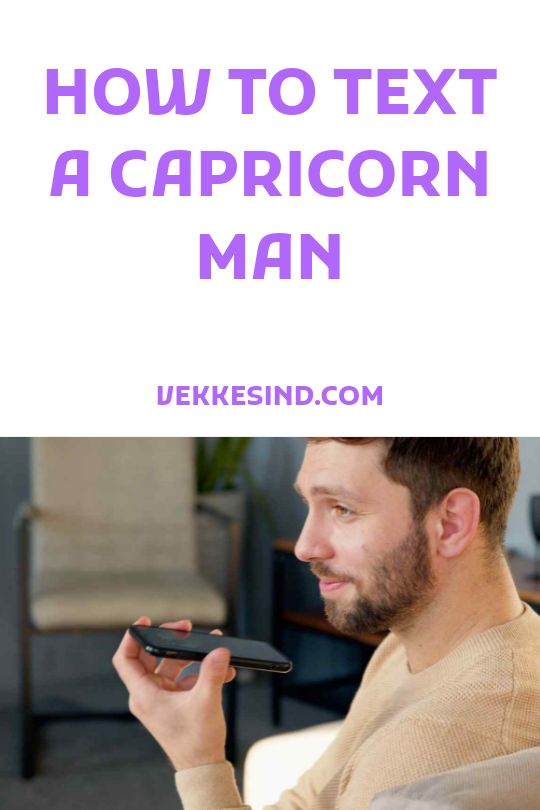 What Does A Capricorn Man Like In A Woman? – Vekke Sind

What Does A Capricorn Woman Like In A Man? – Vekke Sind

How To Text A Capricorn Woman? – Vekke Sind

How to Text a Gemini Man – Vekke Sind