Capricorn is the tenth stage of astrological creation, from Aries’ “I am”, Taurus’ “what is mine”, Gemini’s “who is around me”, then Cancer’s “what are my roots”, over Leo’s “what is my joy” and Virgo “let’s work this over”, Libra and the concept of union, of “we”.

Through Scorpio’s “what is death” and Sagittarius, “what is behind death” we are now at the Capricorn’s point of standing firm in the material world.

To attract a Capricorn man, you have to be a bit paradoxical. This means that you should emanate the feminine energy combined with the open vulnerability, and at the same time, you must be grounded and fully aware of the benefits, as well, as dangers of the material worlds, like overspending.

If you are looking for more in-depth training to attract and keep a Capricorn man, then I’d suggest you check out “Sextrologist” and zodiac-based dating expert Anna Kovach’s book Capricorn Man Secrets.

Why is a Capricorn man so stingy?

A Capricorn just appears to be stingy. But the matter of fact is that he is fully aware of the value of material assets. In most cases, he had to work hard to reach the top, and achieve material security, and now he doesn’t want to waste his money or energy on non-essential things.

The four major elements in astrology serve as the cornerstones for all the life in the Universe. And those elements are fire, earth, air, and water. Having this in mind, the sign of Capricorn is the third or the “fixed” form of the earth element.

In Taurus, the earth element is all about “seeding” or laying the foundation for material life, then in Virgo, it’s about the efforts, “harvest” and distribution of material goods, and in Capricorn, this earth becomes structured, stabilized, and crystallized, so it basically becomes the rock.

In this sense, a Capricorn man values or estimates everything, ideas, humans, or possessions. And since he almost always had to fight hard to accomplish any goal in life, as he gets older, he will respect resources and properties more.

This is exactly why he is the bad company to be with when it comes to reckless shopping or spending “leisure” time because he dreads those activities.

The ruler of Capricorn is the planet Saturn, and this planet might be placed anywhere in the natal chart since it moves 2, 5 years approximately through each Zodiac sign. Its position shows clearly where the obstacles, challenges, and greatest rewards will be.

If the Capricorn man’s natal Saturn is in water signs, Cancer, Pisces, and Scorpio, he will usually be sensitive with his health, dark and depressive. If his Saturn is in fire signs, Aries, Leo, or Sagittarius, he will be extraordinarily stubborn and hard on people in general.

His natal Saturn in the earth signs like Taurus, Virgo, or Capricorn will give him discipline, the ability to see clearly his goals in life, and wealth.

If his natal Saturn is in air signs, Gemini, Libra, or Aquarius, he will be blessed or cursed, depending on the other planetary aspects, regarding his communication abilities and power position.

What are the main traits of a Capricorn man?

The Capricorn man is very sensitive and vulnerable, which he skillfully hides under a seemingly confident attitude. He knows how to control himself very well, and that is why he gives the impression of a cold-blooded, repulsive and insensitive man to those who are not so close to him.

But despite his apparent or learned “whimsy”, he knows how to be very careful and attached to his partner. However, he needs enough time to really trust that partner.

Then he can show the miraculous side of his personality – incredible tenderness. By the way, he is very attached to his home, and can often be attached to a partner out of pure material interest.

A Capricorn man can have sudden outbursts of anger for no reason, and then he really doesn’t know what he is doing, and the consequences can be very unpleasant and lasting.

As he knows how to be dark and pessimistic, he often sees the enemy even there where no one is. But in general, he is firm, disciplined, methodical, and strategic.

Before I we review a bunch of ways to attract and seduce your Capricorn man, it’s probably a good idea for you to check how compatible you are with him!

Anna Kovach created a fun quiz to determine your compatibility with your Capricorn man. There are 9 easy questions! Start Anna’s Quiz!

Can you seduce a Capricorn man?

You can seduce a Capricorn man, but you must act very cautious and do it slowly. You should install yourself in his environment and do something useful there, or at least pretend like you are doing that. Then you have to be nice, and step by step, and bit by bit, he will attach emotionally to you.

The planet which will show how, or to whom a Capricorn man will be attracted is the planet Venus. And since this planet is never more than 45 degrees apart from the Sun, he might have his natal Venus in Scorpio, Sagittarius, Capricorn, Aquarius, or Pisces.

If a Capricorn man has his natal Venus in the sign of Scorpio, he will love sharp, witty, and sexy partners, who can also serve him as good support in social circles.

If his natal Venus is in Sagittarius, then he will fall for educated partners, but he will mostly dream about a certain person, and not openly approach them. Some aura of secrecy will surely be around his love life, including affairs.

In the case his Venus is in Capricorn, he will be attracted toward someone who mirrors him. But in this particular case, and if his Saturn is involved, he could be with the partner of seven or more years age difference. His lover should be conservative, serious, and quiet.

If his natal Venus is placed in the sign of Aquarius, then he will attach to someone who can clearly bring him material prosperity and be used as a “safe-zone” between him and the outer world, emotionally and financially, too.

If his Venus is in Pisces, he will emotionally attach to someone who will become his close friend a long time before, and with whom he can spend peaceful moments.

How to attract the younger Capricorn man

The younger Capricorn guy will fall in love with someone sensitive, sensual, and above all, a humble person. He will just love those domestic types who are keeping away from the hustle and bustle of parties or public gatherings. And he will love that person because he seeks peace.

The area of partnerships for Capricorn man is placed in the sign of Cancer, ruled by the Moon. And his natal Moon can be positioned anywhere in his chart. However, wherever his natal Moon is positioned, this will be the weak or vulnerable point in his life.

Have in mind that Moon represents the mother, nurturing and carrying for others.

In this sense, you should be the one to offer him freshly made cookies, ask him for a little help around your home, and awaken his hero instinct at the same time, and treat him always with kindness and genuine softness.

How to attract a mature Capricorn man

The older or the mature Capricorn man will become strongly attracted to those who know the true value of things, and yet, still appear elegant and tidy. He will simply love someone intellectual, but uses proven facts and knows exactly what they are talking about.

You could find many Capricorns in their mature age single and available. And this happens because they usually need a longer time to find a life-long partner.

Or, in another case, a Capricorn guy will lose his partner because of his temper which can be really harsh earlier in life.

Right now, a Capricorn man is not just into vulnerable figures who resembled his mother or the motherly feelings he grew up with, but he is more into beauty, especially if he had gained wealth, practicality, and some down-to-earth reasoning and conversations.

This will take place because his areas of talents and romantic love seen through Taurus, and his area of higher education, inspiration, and second marriage or significant partnership, according to western astrology, and seen through Virgo, will become highly active.

Concretely, he will become prone to those partners who have physical beauty in the sense that they have delicate moves, appealing appearance, and a great sense of true values, which are all essential traits of Venus.

Also, he will become attracted to those individuals who are humble, live their life as a service to many beings or ideas, and have deep insights and the ability to clearly see all strengths and weaknesses of their issues, to analytically approach each problem, and of course, resolve it easily.

So, by acting as you are a down-to-earth person, but with a powerful sense of beauty, taste and innate politeness will create a glance in his eyes, and if you are co-operating with him on some project, he will surely fall for your charm.

As I mentioned at the beginning of this article, check out Anna Kovach’s book, Capricorn Man Secrets, for more in-depth training for women who want a Capricorn man to chase and desire her. 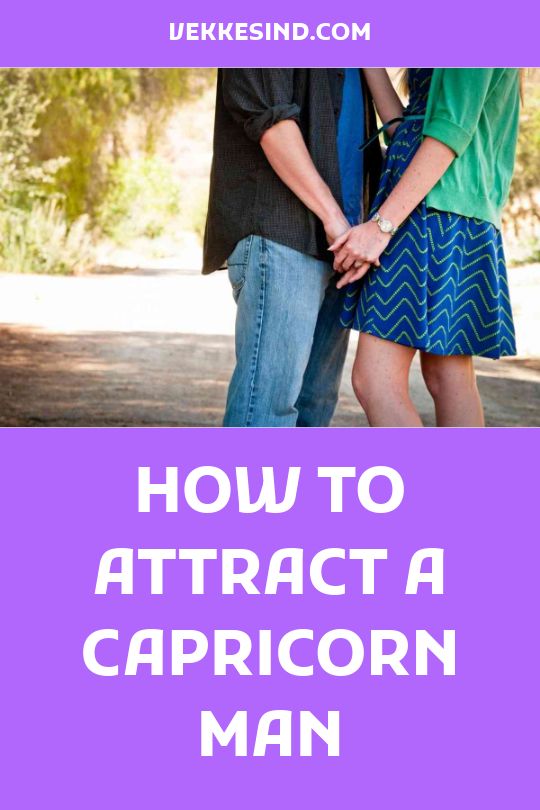