The Capricorn man is ambitious, dedicated, and is aware of his own limitations. He is someone that looks serious at first but if he does get to the point where he is most comfortable, you will find that he has a sense of humor and have a romantic side to them that is not so obvious.

The Capricorn man in marriage is faithful and traditional. This is a marriage that wants to build for the future and to pursue their ambition. When you marry a Capricorn man, he will make sure the house is fully stocked, bills paid, but it also means a man that may possibly miss a lot of moments and family events.

For more (in-depth) information about your Capricorn man, also check out “Capricorn Man Secrets“. That said, let’s first take a look at what a Capricorn man is like during courtship…

The Capricorn man in courtship

The Capricorn man in love is like your personal savior in trouble, but before he will offer that to you, he will be slow to love. He thinks of partnerships as a form of investment. He would not want to make a bad deal by not thinking it through.

In relationships, he is capable of loyalty. He would want to make the relationship work regardless of the circumstances because he does care about his public image may be a bit too much. His biggest fears include failure. He might bring his controlling tendencies in the relationship and he would appreciate it if you would trust him rather than question his methods.

An ideal partner for him is someone that can make him look good. He likes having a sense of authority. The Capricorn man is an innate leader. He is resourceful and he dislikes waste. If something feels too extravagant and unnecessary, he would be turned off by it.

Though he has a romantic side to him and he will show his love through action and gifts, he isn’t the type to express it verbally or make it feel emotional. The Capricorn man is the polarity of Cancer, from nurturer to provider, from motherhood to fatherhood. His values have something to do with surviving and being responsible on your own.

The Capricorn man is looking for someone who is goal-oriented and practical. Someone that has a determination to succeed or someone that can balance him. Sometimes he may get lost in the pursuit of material success that he forgets the greater meaning of life.

Marriage with a Capricorn man

The Capricorn husband is not the most affectionate

No one is perfect, the Capricorn husband may be reliable and loyal to his partner but he will not be the one to write you poetry or love letters. He is not naturally romantic or at least how they show it in movies.

Instead, he is a workaholic. He wants to grind badly so he can provide a good life for his future family. Those who wish to have a traditional marriage will appreciate the Capricorn husband. So, he will make sure the fridge is always full, bills are paid, but he may not always have time to spend with you.

He would need understanding. It’s not that he doesn’t love you, you are in fact, his greatest motivation to succeed. It is just that he always gives himself the pressure to be the best. Career always has to come first and sometimes this means missed events and absence from family gatherings.

The Capricorn husband is very sensitive about resources

The negative trait of your Capricorn husband is being too controlling. This is a projection of his stress and he’s basically extending it to the people around him. He could nag about things that can be done better or maybe he would prefer that he sees you making most of your time instead of being idle.

He might even be the type to keep a to-do list. Always checking his schedule and that he needs to be able to follow it. Sometimes you would get a Capricorn husband that is self-assured but many times, the Capricorn husband deals with intense internal pressure. He’s very critical of himself.

This is only because your Capricorn husband is very responsible. There might be a tendency for him to boss the people at home but he has good intentions. He may be a killjoy when it comes to finances too. He would seem like a penny-pincher but he will surely spoil when he sees he can afford to do so.

Check out “Capricorn Man Secrets” for everything you ever wanted to know about a Capricorn man… *but were afraid to ask!)

The Capricorn husband is similar to the grumpy cat

He has a permanent seriousness to him. The Capricorn husband can remind you of the internet icon, grumpy cat. Maybe he’s not really grumpy but his face is fixed like that. He constantly worries about the future. His wife would know better by planting seeds of positivity in his train of thought.

He may be pessimistic, which could influence the home. It’s best to give him an environment where he can feel more relaxed. He is a person of habits. He would prefer to choose what’s familiar rather than having abrupt changes.

Don’t let appearances fool you, he may seem like he pushes away people for him to focus but deep inside he longs to be appreciated. He would want to be cuddled by his wife and be told that he’s doing great, to thank him for what he does for his family.

The Capricorn husband is committed for life

Though the Capricorn husband can fall into the temptation of infidelity, it is very rare that he does so. Most of the time, he would want to stay with the same woman that he married. Even if the unfortunate event that he makes that mistake, he will try to fix and stay with the woman he committed with. He will still choose the original over the fling.

It is not common for his sign to cheat. Maybe it has something to do with their goals not being aligned, or maybe the woman was able to stroke his ego. He won’t do this immediately; this would be a desperate resort for him to escape his problems. Even he knows what he did is not justified and it will keep haunting him.

The Capricorn husband is the embodiment of fatherhood

Your Capricorn husband would respect the old way of disciplining your children. He would be strict and would request that they will be able to show him respect. He wants them to be obedient and can be the type of father to ground them.

He wants to teach them about being responsible so that when the time comes, he will be able to live with ease knowing his children were taught well. If the motherhood archetype comes from Cancer which is to nurture and to honor their feelings, then Capricorn will have the fatherhood archetype, the one that teaches them independence.

Maybe because he is always working, he might not be at home at all times. His kids may develop rebellious traits trying to get his attention, it would be best to prevent this by letting them understand the way he loves the family is the sacrifice he does. It’s not like he enjoys missing out on family gatherings and events.

Even if you don’t tell him what to do, the responsible Capricorn husband will take care of his wife and children. He may even extend his duties to other family members. He wants to be the provider and the person that everyone can rely on.

Remember, the Capricorn husband’s definition of love is respect. If the family can make him feel respected then this will nurture him. It will strengthen him and inspire him when he sees his family enjoying the fruits of his labor and being able to recognize his sacrifice.

He wishes for his wife to give him respect and appreciation. He doesn’t ask for too much, he might even feel threatened if he thinks his wife is competing with him. If you marry a Capricorn man, just let him have the title of authority. You will always have a say in his decisions, he would just feel like he was the one who wanted it.

Basically, his personality is all about stability and seeking growth. Many times, his wife may feel that the marriage feels bland, lacks excitement and maybe her husband will not have enough time for her. It doesn’t help that he’s unwilling to change either, and has an ego issue. He needs to feel like he’s always in control of everything.

Many times, the Capricorn husband likes to put his head up high and discriminate against those below him. Of course, everything needs to be balanced. If he is dominant, then the wife will be supportive, but she can also show him life is not always about what to show for it. He will learn that how he treats others will somehow sneak back on him. It will not be a pretty picture.

Maybe you’ll end up being the angelic part of the marriage and he will constantly receive remarks of how cold and unaccommodating he is. You will probably be his spokesperson and explain that love to him is different. If there is something he will need to realize, vulnerability is not something to be ashamed of, it is even a type of strength, though not many will understand this.

Marriage to a Capricorn man, in a nutshell…

The Capricorn man in marriage is the conventional type. The kind that the husband works and provides, comes home by dinner time surrounded by his family. This man is ambitious and places deep importance on the public image and reputation of his family.

The Capricorn husband is faithful and reliable, he is not the type to fall into the traps of infidelity. Though not impossible, he is always loyal to the original wife, and even if the rare occasion that it does happen, he will leave the affair to ruin. His guilt will always haunt him and it may drive him to make it up to his wife.

As a father, he is strict and quite the disciplinarian, resentment amongst his children might suffice that is why he also needs a partner that can balance his extreme dedication to work. A wife that can be his spokesperson and is supportive of his ambitions. Despite his hunger for recognition, he is actually a simple man.

As long as he is given respect and appreciation, he is content in his lifestyle. For the Capricorn, husband love is about fulfilling duties. It’s all about action versus empty promises. He is critical of himself and always anxious if he is doing enough. A loving wife that is ready to embrace him after a day’s struggle is like a glass of cold water on a hot day. 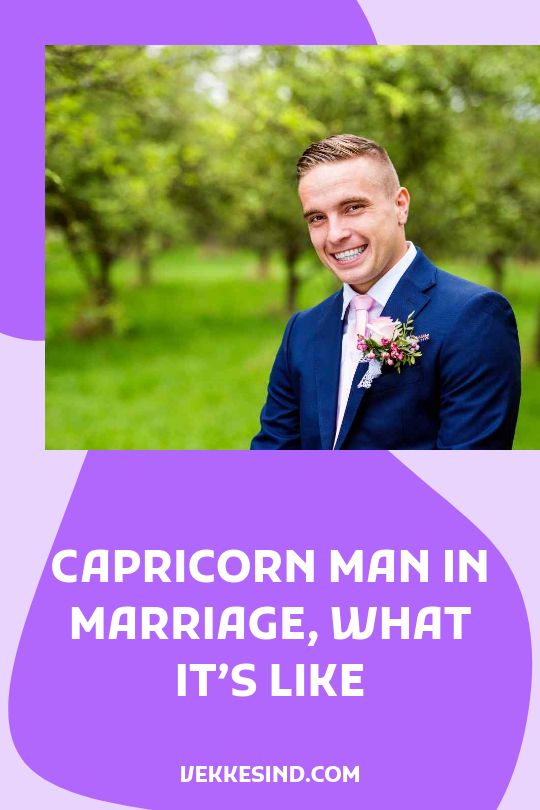