The Sagittarius man is a fun-loving man that lives in the present. He may not be the one you can rely on long-term planning but he does make an excellent motivator. He wants to experience it all and explore where no one has ever been. He is a man that sees the entire picture rather than checking details.

The Sagittarius man in marriage doesn’t feel like one. Marriage with him feels like an open-minded union. He is the bachelor of the zodiac and if he does need to marry, he would prefer to marry later in life.  Though when he does settle, he makes up for what he lacks as a husband as an excellent father to his children and has an innate skill in teaching the values of life.

For more details about a Sagittarius man, check out “Sagittarius Man Secrets“.

The Sagittarius man in courtship

The Sagittarius man in love will not give you a traditional relationship. He is a man that wants to live a full life. He might not be a man that you can rely on when it comes to the future but he will definitely give you a lot to cherish and even feel the greater meaning of what life has to offer.

When he is in love with you, he will be curious about getting to know you. Though he is always optimistic, he would not be fearful of trying his chances with you. You would expect a lot of flirting and attempts to get your attention even if it means light-hearted pranks and teasing.

The Sagittarius man is infamous for his allergy to commitments. He might even be labeled as a player but it is possible to get him to fall for you. The Sagittarius man would only commit to someone who is one of a kind, even if he is reluctant to commit for the long-term, he is capable of spending a lifetime with a partner in crime and his best friend forever.

He would spoil you by taking you everywhere. You would notice how comfortable he is with you; he’s not embarrassed to express himself around you. The Sagittarius man is very honest with what he feels. He is the type of guy that oozes what you see is what you get. He is very adaptable to any situation and if he does love you truly, then he will always put his best version towards you.

Marriage with a Sagittarius man

When something is bothering him, he will be blunt. He will not make an effort to say what’s on his mind gently.  It is also best not to be too clingy or dependent on your Sagittarius husband. He is not a sentimental type of man and might feel out of place not knowing how to comfort someone especially if it’s too in-depth for him. He can only try to be more optimistic and try to distract the person but he doesn’t truly feel what the other person is feeling most of the time.

If you are also an overthinker, he might have trouble relating with you. It’s not because he wants to invalidate what you’re going through; he’s just wired differently.

Your Sagittarius husband will demand some sort of freedom even if he is already committed and responsible for you. The thing is, a marriage with him works best when both of you are independent and have lives outside of the relationship.

He is passionate and he expresses this in physical ways. He is not embarrassed to admit when he is feeling adventurous with you and would be happy when his partner is the one initiating an encounter.  You can also expect that your Sagittarius husband would prefer the outdoors, he would only be a homebody if his hobbies are enough at home that would keep him there.

If you are more conservative and traditional, you might be disappointed if you expect he’d be around more. He’s always the happiest when he is on the go, if the situation allows it, he might have a career that allows him to travel and he might just bring you along with him. He needs to be able to satisfy his desire for wanderlust.

The Sagittarius husband is also not the most reliable when it comes to routine or domestic chores. He could be Virgo’s worst nightmare. Organization and details will not be his strength. Though his strengths could include his direct approach to communication.

The Sagittarius husband will not give you a traditional marriage

It’s really difficult to imagine a Sagittarius man getting married because it is just beyond his nature. In his relationships, he usually went through different women before settling down. If you are jealous, possessive, and like your husband to be the ideal man, he will not be able to give it to you.

When you marry a Sagittarius man, you would have to accept that he has a life outside of your marriage. He would be more inclined to remain faithful if he has freedom. He would almost be someone that is forever young in the way he acts, refusing to grow up. He likes to have fun and would want his marriage to have its playfulness.

In a way, the Sagittarius husband is a rebel. He is the warrior archetype in the zodiac and his mythology has something to do with defying expectations. The centaurs were known to be warriors but the Sagittarius chose to be a teacher instead.

When you are able to accept him as he is, your Sagittarius husband will actually love and appreciate it more. When he is able to be himself and know that he has a home to come back to, you become his place of comfort and someone he looks forward to resting with.

If there is anything that he needs to be in, that would be in groups. The Sagittarius husband doesn’t like to be on his own for too long. He would seek to have deep conversations even if it’s with strangers. He would be interested in travel and learning about different cultures.

Even when he is married, he tends to remain his extroverted self. He will still stay in touch with his friends. Sometimes this becomes an issue for his family because it would seem like he prioritizes them more than his family.

The truth is, he is just carried away by the moment. If it’s not obvious, the Sagittarius husband is actually humanitarian and has a great capacity to care for others but not in a sensitive way. He will do it like how Tony Robbins does, to hype and fire them up and to make them excited about the things that we are yet to experience if we only had the courage to try.

The Sagittarius husband will be easy to get along with

Generally, the Sagittarius husband is light to have at home. He also has a generous personality that makes people like him more. As his wife, he takes it to extremes, even if it means at his own expense or trouble, he will go out of his way just to be able to be your hero when you need him.

In a way, he is reliable, just not in the way most people would think of an average husband. He is allergic to responsibility and taking care of someone else feels like a big deal because he can barely keep himself in check.

Most men may be shy when it comes to tough times but a Sagittarius husband that is dedicated to his wife will face those difficulties with you. He is willing to sacrifice himself. He will be the one to have your back through better or for worse.

The Sagittarius husband will flirt until the end of time

Mostly with you, but just setting the expectation that he will find it difficult to stop flirting because, for them, it is second nature. Sometimes he treats it like a game or challenge to see how the other person reacts. See, he does it for the thrill. If there is a trait you would find out about your Sagittarius husband, it’s his wittiness, he would even enjoy playing pranks and teasing others just for the sake of it.

For the Sagittarius husband, his flirting personality does not mean he intends to cheat. For him, it’s good fun and he has no intention of taking it seriously especially if he says he loves you. He would be the type to just end things and if you asked if he still loves you, he won’t make up a lie and say what’s on his mind.

You would know if your Sagittarius husband has been seeing others, he won’t even bother hiding his tracks. They are reputed to be very honest and maybe even insensitive at times.

Maybe the average woman will go crazy marrying a Sagittarius husband, but he does make up for it by being the best dad in the world. He may enjoy the outdoors and having to travel a lot but he will always keep his heart at home.

For the Sagittarius husband, family is irreplaceable. He may not have intended or had dreams of being a father but he will be able to give them creative freedom and encouragement to pursue their heart’s desire.

He may also not be the best disciplinarian and it might be up to his wife to be the iron tiger of the home. He will instead instill a great philosophy and mindset in his children. He will teach adaptability and acceptance of the situation; he will shower them with his positivity.

Though it doesn’t mean his children won’t taste his bluntness. Of course, everyone has limitations when he does have enough, the Sagittarius father does have his way of exploding in bursts to the shock of the people around him.

Marriage to your Sagittarius man, in a nutshell…

The Sagittarius man in marriage is unconventional. He will not be the ideal husband. He will instead give you a lot of memories to share and teach you how to live in the moment. If you are an overthinker, you might struggle in communicating with him because he’s wired differently.

He doesn’t want to be dragged down by negativity or be told no. He dislikes limitations but he does have his own strengths. What he lacks as a husband he will make up for it in having good relationships with his children. The Sagittarius husband will be there to make countless irreplaceable memories.

He will show you acceptance of the situation and just jump on the unknown. The Sagittarius husband is adventurous, generous, and actually has a sacrificial side. He is the one to stay even if things get tough while others jump ship.

He will be reliable and faithful just not in the ways society would expect. He does it in his own way. He is a rebellious husband but he will make life fun for you and his family. If only he also learns to balance his extroverted ways with the realities of life, then everything would be better. 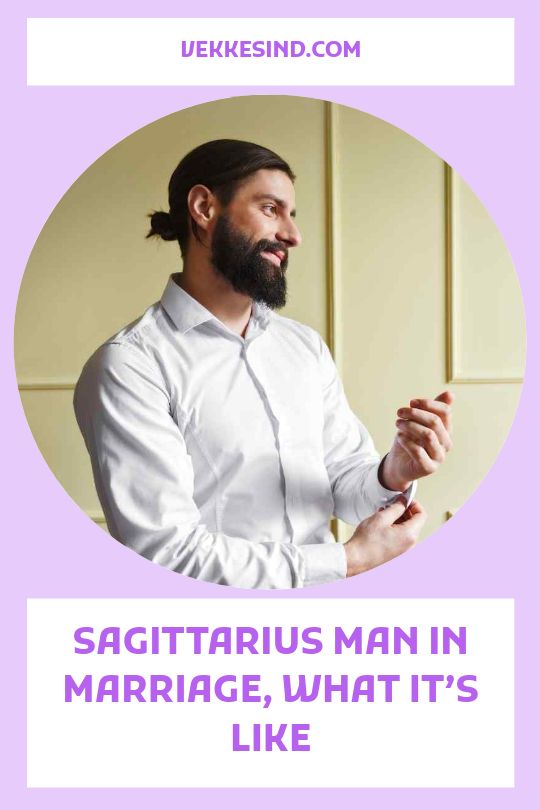