The Aries woman and the Sagittarius man is a pair that can be ambassadors to freedom and there won’t be a lack of enthusiasm between the two.

The Sagittarius man and Aries woman in marriage feel like marrying your best friend and partner in crime. The compatibility between these two is high. The relationship will be full of adventure and would have a sense of playfulness. As two very energetic signs, together, they can do anything.

For more details about your Sagittarius man, check out “Sagittarius Man Secrets“.

Both inspire the best in each other and share the same interests. It feels like both of them find wrestling and debate relaxing. Even if the relationship has become long-term it never seems to lose its magic. To them, every day is another day to discover something new with the love of their lives.

They both understand their need for space which makes the relationship light. The Sagittarius man doesn’t take things too seriously and has a talent to make anything comedic. This may catch the Aries woman off guard who may love the fact that he makes challenges feel stress-free.

The two can also be a bit too flirtatious and sometimes they don’t realize this. Between the two of them, it will be the Aries woman that may be possessive. Too much of this will not make the Sagittarius man too happy.

When it comes to taking it to the next level like marriage and children, they may take their sweet time. Though as much as we like this pairing to be completely perfect, the downside would have to be their pride. They don’t back down from a fight and fiery words may come out from their mouths without thinking about a middle ground.

For more details about “Dating a Sagittarius man… and the 11 things you need to know!” click here.

The Sagittarius man can encourage the Aries woman to be more experimental in the bedroom. He might make jokes while he is doing it. He is able to relax the normally domineering Aries woman and what is usually physical and carnal becomes a bonding that she looks forward to beyond the body’s desire. What she feels is actually contentment on a soul level.

The Sagittarius man will always take the Aries woman’s aggressiveness in bed as “bring it on.” He will encourage her to be experimental and adhere to what feels pleasurable to the other. He may enjoy teasing the Aries woman who wants to get it now. If there is a category for everything, they want to try them all.

For 6 Steamy tips to turn on your Sagittarius man in bed, click here!

As friends, the Sagittarius man is honest and direct which is what the Aries woman appreciates about him. They can talk all day. They might enjoy making fun of celebrities or whatever they feel like. There’s a sense of reliability with one another and when it comes to communication, it feels telepathic.

If there are any misunderstandings, they need to be able to find a middle ground. Sometimes when they’re in the moment and are lost in their emotions they forget to be gentle with one another and just blast out words they can’t take back.

The Sagittarius man in love likes to express it through actions. He will make time for his Aries woman. He will never want to make the Aries woman feel disappointed and is set to prove their affections to them. Many times, he may flirt with her even if they’re already in a committed relationship. He has this thing for asking for her attention through corny jokes.

When he loves the Aries woman, he is curious about her, not just on a surface level but actual deep conversations that strengthen his bond with her. He will include her in his plans and take her away and travel together. Even if he is not known to be the most committal of the signs, the Aries woman is one of those few signs that can truly convince him to stay.

They are a couple but they are also best friends. Their relationship usually has a strong foundation.  Their relationship gets better as it ages. Their union is full of heart and both can feel this even if they decide not to tell one another directly, they just know it.

Since they most likely have a lot of things in common, whatever they decide to do, they’ll amplify the fun. Whether it’s about going out for coffee or mountain climbing, there’s least to zero resistance and they just agree to do it.

The Aries woman will be able to teach the Sagittarius man to be more decisive and have urgency on the way things should be done. As they do share similar values, there’s definitely a possibility for them to have a compromise if only the two signs are willing.

Does a Sagittarius man and Aries woman work, is it a good combination?

The Sagittarius man and Aries woman do make a good combination or even excellent. The pairing boasts understanding and similar values. It is a relationship that gets better over time. Both signs take their time to commit and fall in love, as they value their independence only to realize that two is indeed better than one.

The Marriage between the Sagittarius man and Aries woman is great. This is one of the most playful couples in the zodiac. Marriage between them feels like marrying your best friend and partner in crime. They are one of the rare couples that make their relationship better over time in contrast to most who fall out of love.

When it comes to their sensuality, the Sagittarius man will be able to put the Aries woman outside of the physical pleasure but into something soulful. He is able to make jokes while they are doing it which can catch the Aries woman in surprise but have fun with it.

With domestic matters, they might set this aside until they need to. This is a youthful couple that enjoys travel and experiencing new things. They are both adventurous. The downside of the marriage may have something to do with their pride.

If they are in conflict, they tend to be very stubborn and opinionated. They might spew words that will never be taken back. It’s best that they put in mind having a compromise or sticking to a middle ground so that arguments will be less or shorter. 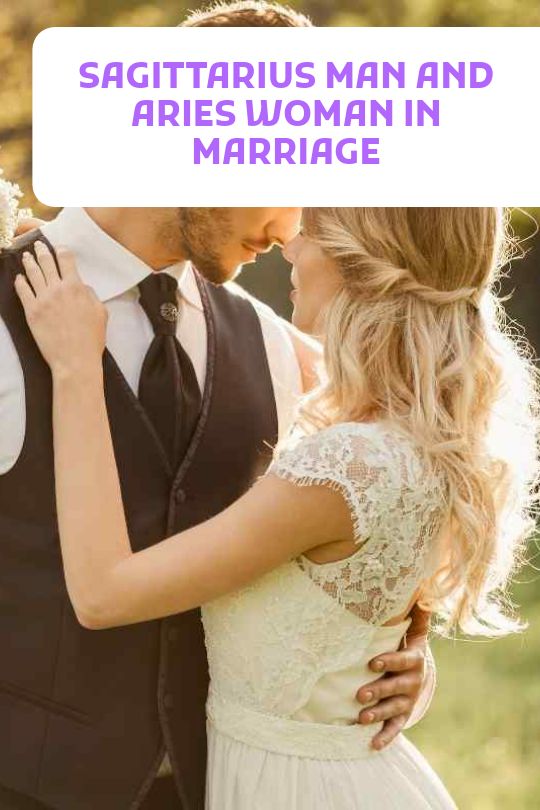