A sensitive and gentle soul – how in the hell can you turn a Pisces man on? Right off the bat, pinning him down the wall will absolutely be the end for you if you were thinking of doing that. Here are other ways of seducing him.

To turn your Pisces man on, you need to talk about your sexual fantasies. You should open up to him completely. Let him know what you feel. You need to be somebody who is gentle but dominant at the same time. You also need to have some chastity in your body. And lastly, cook for him.

If you want even more details about your Pisces man, then also check out “Pisces Man Secrets“. That said, there’s a lot more for us to discuss here! Let’s get into it!

Your Pisces man is ruled by Neptune, which is a planet that is a ruler of fantasy, illusion, dream, and psychic abilities. It is also ruled by that planet, Jupiter, which is a planet of luck and expansion. It is a water sign – the element of emotions.

Your Pisces man in bed will be full of passion for fantasies – not only his but yours as well. He likes to make love other than having a straight-up intercourse session. He can be dominant and submissive both at the same time. He will also not care about your looks, he cares about how you feel.

He is passionate about fantasies

Your Pisces man builds fantasies in his head – all sorts of fantasies, including sexual ones. This is also reflected in the bedroom. He is all about fulfilling his and your fantasies. He is also very intuitive about his partner’s needs, and if he or she is shy around him, it does not matter because Pisces man just knows. That is why making love to him is so unreal!

When a Pisces man is in the bedroom, he is making love! There is a lot of passion when he is doing it, and you will feel the intensity. He is so giving that he put his partner’s needs about his. And if this is not reciprocated, he will feel neglected just because his needs were not met. So, if you are not intuitive like a Pisces, make sure to ask him what he wants in the bedroom.

He can be both dominant and submissive

I talked about how your Pisces man has a dual nature, and he can flip the glitch! He can be submissive one time, but all of the sudden, he wants to be submissive now. This is just a normal night with a Pisces man, so do not even be surprised.

He plays aggressively if he wants to downplay his feminine nature. He puts a façade in the bedroom that he is dominant, but when you look into his eyes, his partner will realize that there is a lot of passion and love that is inside of him. And when he finally realizes that you are trustworthy, he will let go, and play submissive as well.

He is not all about the looks

Unlike Capricorns or Scorpios, a Pisces man does not care how you look. If he wants to go to bed with you, it’s probably because you have a great personality that he’s been drawn to take you onto his bed. He is sexually attracted to people that he sees has passion. He is attracted to people who have stronger personalities than him.

Just a little reminder, do not just sleep with a Pisces man if you have no intentions of doing it past the bedroom. You may have witnessed how emotional a Pisces man can be, and if you are not up for that, then you better leave him alone and get with someone who attaches no strings like a Sagittarius.

Check out “Pisces Man Secrets” for everything you’ve ever wanted to know about a Pisces man… (but were afraid to ask!)

6 Tips to Turn On your Pisces Man in Bed

Your Pisces man has a sign of depth and spirituality. He is constantly looking for a soulmate. He believes that there is someone that is truly meant to be with him. And if you genuinely feel like you are this person, it is important to talk about it with him. Talk about things in a deeper sense. That will surely melt his heart and will be turned on.

Sexually, you can ask him about what he fantasizes about in the bedroom. Ask him about the things he will get lost in and be ready to fulfill these. Talk about what he desires the most to build up that emotional and sexual bond.

Open up to him completely

Your Pisces man is a gentle and sensitive soul, and he absorbs everyone’s emotions when in a room. This is important to know because if he feels that you are into him and that you want to go to bed with him, he will give you the same feeling. So, make sure that you are showing him genuine emotions.

You can start by doing at-home dates and maybe watch a romantic movie. A Pisces man loves that. Let him know that he is the only one you want to be in bed with. Tell him that he is that one person that could complete you. And only then will he want to sleep with you.

If you know your Pisces man too well, you will know how kind-hearted and sensitive he is. And if you still do not, then I hope you got hints from this article. He wants his sexual partner to be the same. He does not like the aggressive ones. He likes his women or men to be just like a poem. Act like one, and this will definitely mend his heart and make him want to sleep with you.

Being dominant here does not mean banging against the wall and pinning him down. This just means that you need to make the first move. Your Pisces man can be a little shy when it comes to this kind of stuff, so you need to be the first one to take the step.

He tends to get shy because he does not want a woman to feel uncomfortable around him. So what you can do here is dominate him by reassuring him that you like to do it with him.

Do not sleep with him on the first date, and instead, build a bond first. Maybe have a candlelit dinner with some romantic songs in the background. Make sure that you are someone that can deal with this delicate soul.

The next time you hang out in his house, volunteer to cook for him. Not only will he feel cared for, but he will also feel like you are down to nurture him for the rest of your lives.

He is the type of person to neglect his physical needs because he is too focused on spiritual and philosophical matters. For him to want to sleep with you, give the man a happy stomach!

Before we reach the end of this article, I’d again recommend “Pisces Man Secrets” for all the details we couldn’t cover here!

Are Pisces Men “Freaks” in Bed?

On average, not really. Some of them may be, but not most of them. Although they can be both dominant and submissive alternately, they really do not like having a partner that is too aggressive and out there. They prefer an emotional way of making love. They like it full of passion and love.

Your Pisces man in bed, in a nutshell…

To turn a Pisces man on, you need to: 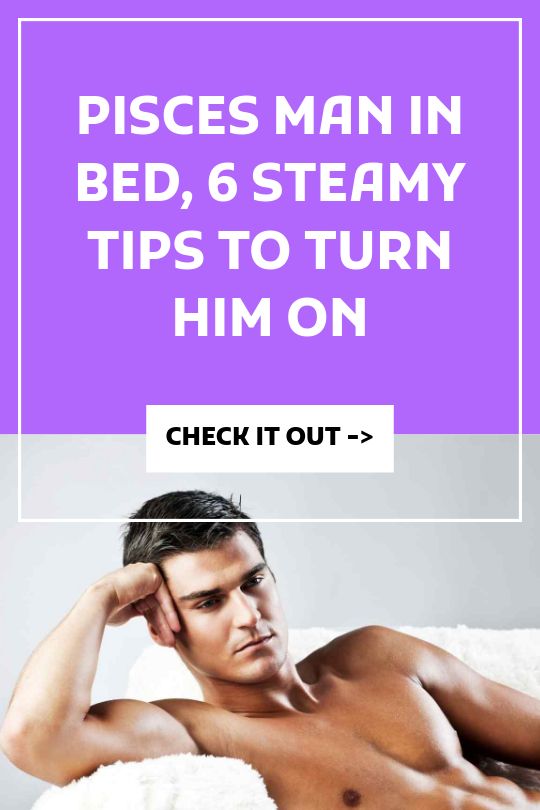