The Pisces man is the hopeless romantic of the zodiac. He is often described as the knight in shining armor, the lover boy who would bring you flowers and write you love letters. He is a personified fairy tale. He chooses to see people in rose-colored glasses that sometimes he can lose track of reality.

The Pisces man in marriage is like choosing an ending in a storybook. You have two possibilities. A mature Pisces man who is able to utilize his wisdom and martyr traits or someone who is not so mature, the escapist Pisces man who runs from his responsibilities. Better to use discernment as your life depends on it.

For even more details about your Pisces man that we can present here, check out “Pisces Man Secrets“. That said, let’s look the Pisces man in courtship.

The Pisces man in courtship

The Pisces man is sensitive and has feminine qualities. He is a gentleman and most of the time he is attractive. He is able to seduce women because he makes them feel validated and understood. He is also flirtatious and if it’s feelings we’re talking about, he’s all over it.

As a partner, he is idealistic, if he truly wants to pursue a woman, he does so with gusto. He will take note of what makes you happy. He will wait hours just to see a glimpse of you or be able to meet you. He would look laidback and chill. It’s as if he won’t harm a fly.

The Pisces man’s behavior in love would show that he would care about what you think. Whatever he does he thinks about how you would think of him. He becomes anxious about his decisions. He may seem creepy because he may either keep staring at you or keep a photo of you somewhere so he can always dream of being with you.

When a Pisces man is in love, he becomes protective. He may not be the most masculine of all the signs but he can drop everything and die for the woman he loves. He would always make time for the girl he wants and would be willing to tell you that he’s committed.

There will be lots of cuddles. Affection and passionate encounters would be bliss with him. He would think about the future and how he will be able to provide for you. Though there is a side to them that may make them seem like playboys.

Since he is a man of feelings, excitement and passion do affect the relationship. It also doesn’t help that he is mutable, which means he may realize over time that you were not the right girl for him. He might change his mind about you and there’s really nothing you could do about it.

Marriage with a Pisces man

The Pisces husband is a rabbit

Your Pisces husband will have the stamina of a horse and the sex drive of the rabbit. He is just full of passions that you might drown in it. If he wrote lyrics, it would resemble John Mayer’s albums. The Pisces husband is definitely gifted with his baby-making skills that if you don’t want to have a child early in your marriage, then better stock up on protection.

He is very sensual so he wants someone who can satisfy it. Even if he doesn’t say it, he places importance on lovemaking. If you want to end things with him fast, just destroy his ego in the bedroom and he will agree on separation before you can blink an eye.

He may also look like a rabbit. He looks so gentle he could fool someone that he’s innocent. There’s a study that most serial killers are mutable signs, and Pisces ranks on top of it. Though he is renowned for his kindness, he is also capable of the very opposite.

His imagination can either take him to the good of all or for the destruction of it. It’s hard to make a Pisces husband angry. He is usually understanding and would rather evade a conflict. Like a rabbit, he may hop somewhere and hide but don’t forget about the rabbit in Monty Python. Basically, you can never underestimate the gentle Pisces husband.

The Pisces husband is spontaneous and goes with the flow

Forget about planning when you are with your Pisces husband. He can be a bit fickle-minded. He doesn’t like to think about too many details but likes to see things in full pictures. He’s a visionary but not a planner.

Dominant ladies may appreciate his submissive side because he does aim to please his wife. He may not be known to be the most responsible. He may even seem like he lacks ambition because he finds happiness in simple things. It is easy to make him happy.

If you’re looking for someone who will be a tough and masculine provider, you may want to think twice if you will settle with a Pisces husband.

The Pisces husband is capable of complete surrender

Surrender or sacrifice are two things he is able to give to the relationship. It was said that in the Bible story, Jesus fed a crowd out of 2 fishes, the symbol of Pisces. Many may comment that kindness is a weakness but it is actually the opposite, there is power in complete surrender.

The Pisces husband represents letting go. If he is still childish and immature, he would instead show holding onto things that are no longer serving him. He would be codependent on others instead of putting his faith in something divine.

The Pisces husband’s mood also makes it challenging to live with. He attracts those who need healing, those who are also going through a tough time, and because of his sensitivity, he tends to take their wounds and make them his burden. For him, he can absorb the mood of the room. He is deeply empathetic which can affect his performance at work for example.

The Pisces husband will make sure to take care of you

When a Pisces husband is devoted, he will do anything to provide and take care of you. He would be a homebody and enjoy those little moments with you. He is also intuitive, and he can sense if something might be bothering you.

He has a hero complex; he wants to make his wife feel like she is safe with him. That she chose well. The Pisces husband can be a great pretender, he can be everything his wife wishes him to be if only if he possessed the focus of a Scorpio and the determination of a Taurus.

If you are traditional, you may wish for your Pisces husband to be a good provider but for the Pisces man, he needs to be encouraged a lot. He needs to be inspired; it is like his output is dependent on what he feels.

The Pisces husband has a childlike personality

Since he can be codependent in relationships, he can seem like a child. Always needs reassurance from his wife. He needs to be reminded that he is doing well. Sad to say, this can open a way for him to fall for another woman because if his wife has a dominant and critical personality, then he would look for a woman that he is able to handle.

It’s not really difficult to make a Pisces husband cry. Even if you leave him alone, something would bother him. He would need an emotionally strong woman that would give him a sense of what he’s doing. He tends to compromise and listen compared to his Sagittarius counterpart.

He doesn’t enjoy conflicts. When you argue with your Pisces husband, he’s just going to choose the easy way out. In fact, in mythology, the constellation of Pisces came from the two fishes that lent their bodies for the gods, Aphrodite and Eros to escape the fearsome Titan, Typhon.

The Pisces husband can’t really make up his mind sometimes

He is fickle-minded and maybe you would have to love him for who he is to save yourself the headaches. The Pisces husband is such an escapist that he may fall for addictions or rely on alcohol. The Pisces husband changes his mind so often that it can be traumatizing to think if he will still love you tomorrow.

If he was part of the animal kingdom, he would also be a chameleon, if a Marvel character, may pass for mystique. He tends to understand everyone’s point of view and he sees a lot of possibilities. It’s hard for him to just choose one because he fears hurting someone’s feelings.

Though it’s not all bad because sometimes this becomes a strength. He would be able to play the role of peacemaker or be a diplomat because he can be the bridge for understanding. He can teach people about loving others as they are.

The Pisces husband will make you feel comfortable

When you love a Pisces husband, you would always long for him. He makes you feel comfortable. You would want to stay in bed with him and lose the day. Many times, it would feel like nothing else matters when you’re together.

He is romantic, and he can use that to attract many ladies. Yet, when you truly have his heart, he only longs for you. Pretty faces and curvy bodies mean nothing if it’s not the soul of the person he loves. The Pisces husband can easily feel at home in a person.

If somehow, the unfortunate day that something happens and you lose him. You would feel like a part of you died. You would try to come back for it but you can’t find it anymore. He tends to haunt those he left like his exes. There’s something in the way he moves your soul that you’re just never the same anymore. Almost like an addictive substance and you’re dependent.

That said, I’d also recommend you check out “Pisces Man Secrets” for even more details!

Marriage to a Pisces man, in a nutshell…

The Pisces man in marriage could be your dream come true or your greatest heartbreak. There are always two outcomes. You may either get the Pisces husband that is fully dedicated and loves you unconditionally. He is the mature Pisces, that uses his wisdom and self-sacrifice to make your life better.

The other, is the not-so-mature Pisces husband, one that only goes by what he feels. You would never know if tomorrow he would still love you. He would be fickle-minded and is a slave to his lust. It is best to use discernment when you settle with a Pisces man.

Once you fall in love with a Pisces man, he haunts your memory. Now, it depends if they are good ones or bad ones but no one really knows romance the way a Pisces can. He is a gentleman but a naughty one in the bedroom. He is the perfect combination of a playful couple that wants to make a family together. 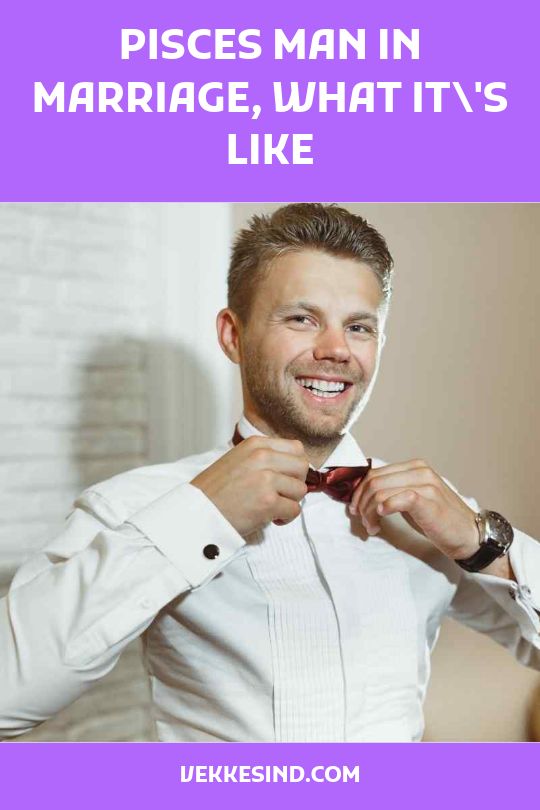