Pisces are the twelfth stage of astrological creation, from Aries’ “I am”, Taurus’ “what is mine”, Gemini’s “who is around me”, then Cancer’s “what are my roots”, over Leo’s “what is my joy” and Virgo “let’s work this over”, Libra and the concept of union, of “we”.

Through Scorpio’s “what is death” and Sagittarius’ “what is behind death” to Capricorn’s “standing grounded in material life”, and Aquarius’ “let’s work together for the better life for all”, we are now into Piscean “emerging into the waters of the everlasting to be born again”.

To attract a Pisces man, you have to become “dual” in the same manner Pisces are. On one side, you have to be organized, strict, and practical, and on the other, you should resemble him, by having his passions, preoccupations, and dreams. And, get lost in them occasionally. This “game” will instantly hook him.

If you are looking for more in-depth training to attract and keep a Pisces man, then I’d suggest you check out “Sextrologist” and zodiac-based dating expert Anna Kovach’s book Pisces Man Secrets.

Why is a Pisces man so confusing?

A Pisces man acts confusing in environments where he doesn’t feel the need to focus, and he is simply not interested, and this is why he has this bad reputation of a “lost” person. However, when he is in his “element” then he will show an entirely different character and shine with his qualities.

The four major elements in astrology will determine how the entire life will develop. And those elements are fire, earth, air, and water.

Having this in mind, the sign of Pisces is the third or the “mutable” form of the water element. In Cancer, the water element is about concentration emotions around the family roots, in Scorpio, it’s all about dramatic challenges and inner transformations, and in Pisces, the water element spreads below as the ocean and above as the clouds in all directions making the person identify with the Universal energies.

This is exactly why a Pisces man finds it so hard to cope with the outside world since his focus is usually directed to some very specialized sciences or arts. And if this is not the case, then the powerful energies of his sign are going to make him prone to many illusions including addictions.

The rulers of Pisces are the planets Jupiter and Neptune, and those planets can be placed anywhere in his natal chart. Generally, their positions will show where the blessings, expansions, arts, illusions, or addictions are.

All those qualities will have a dual nature, showing constructive or destructive inner forces.

If the Pisces man’s natal Jupiter is in water signs, Cancer, Pisces, and Scorpio, he will usually be gentle, specialized in some industry, and probably wealthy.

If his Jupiter is in fire signs, Aries, Leo, or Sagittarius, he will be stubborn, disciplined, passionate, and in a leading position.

If his natal Jupiter is in the earth signs like Taurus, Virgo, or Capricorn, he will be interested in nature, agriculture, and medicine.

If his natal Jupiter is in air signs, Gemini, Libra, or Aquarius, he could thrive in marketing types of jobs and become an exquisite communicator or negotiator.

In the case his natal Neptune is in water signs, he could be prone to alcohol addiction, depression, or fine arts like painting.

In fire signs, Neptune will give him tobacco or any other smoking habits, and a passionate approach to religions or dogmas in general.

In earth signs, Neptune will give him the ability to make and conclude some shady financial deals and manage his business from “behind”.

In the air signs, the Pisces man’s Neptune will make him the biggest liar of all times, or the best fantasy writer or a marketer.

What are the main traits of a Pisces man?

The Pisces man is often modest and does not like to stand out with his appearance or ego. However, he is always enthusiastic when it comes to his ideas that are constantly swarming in his mind. Suffering and care inspire him to create something extraordinary, even if those are little things.

Sometimes he is careless, distracted, and loses items often, but it must be admitted that his moral values ​​are always high and that he is too resilient to the challenges of ordinary life. When he notices that he has been deceived, then he will easily fall into depression, withdraw, and become mysterious.

His mentality is like a candle flame, now it is bright and clear, and in the next moment, it is almost extinguished, melancholic, and lethargic.

Because of his withdrawal from the outside world, the Pisces man is considered by many to be a freak or a depressed being. But he is actually, just outside his social environment, always looking for some higher sense of existence or better use of talent.

The character of the Pisces man is full of contradictions, and for most other people incomprehensible, strange, and as if shrouded in a veil of fog.

He dedicates himself wholeheartedly to the profession he loves and is ready to go higher or deeper than all other people, just because he can achieve complete concentration in those special moments.

Can you seduce a Pisces man?

To seduce a Pisces man for sure you will have to play “his muse” and or “his savior” roles. He will either fall for you if you appear mysterious, subtle, and sensual, or you could be practical, organized, and take care of his basic needs as you would do with a child. The best strategy will be to combine.

The planet which will show how love and pleasure will play out in Pisces man’s life is Venus.

This planet is never more than 45 degrees apart from the Sun, therefore he could have his natal Venus in Capricorn, Aquarius, Pisces, Aries, or Taurus.

If a Pisces man has his natal Venus in the sign of Capricorn he will fall for organized and disciplined types of people, and he might love the greater age difference. If his natal Venus is placed in the sign of Aquarius, he will feel the strange attraction to excentric kinds of partners, but those affairs will be filled with secrets and in some cases, scandalous endings.

If his Venus is in Pisces, he will love to get “lost” in love, and lots of his experiences will be related to his desires and fantasies, and not so much to the real action steps to be with someone.

If his natal Venus is in Aries, he will fall for those people who have an aggressive approach and are not afraid to pursue him until he surrenders.

Lastly, if his natal Venus is in Taurus, will become mad about those who are elegant, sensual, but smart and oriented toward wealth and real values.

How compatible are you with a Pisces Man? Take the Compatibility Quiz (click here)?

How to attract the younger Pisces man

The younger Pisces guy will fall in love with someone talkative, persuasive, seems organized, and has some big plans for the future. Such a person will inject a certain dose of enthusiasm in him and pull him up into the world which will seem brighter and more joyful than he imagined exists.

The area of partnerships for a Pisces man is positioned in the sign of Virgo, ruled by the planet Mercury.

As the messenger of gods, the person ruled by this planet from Virgo, will show certain strength, and the ability to easily cope with usual, daily problems by using common sense and the spirit of practicality and grounded criticism.

Therefore, you can attract the Pisces man by showing that you know what you want from life, through your words and carefully planned actions. He will also fall for those with slimmer bodies, smaller stature, and darker or golden complexion.

Check out the “27 Phrases the turn on a Pisces man”! (Click here)

How to attract a mature Pisces man

The older or the mature Pisces man will show exceptional attraction toward those who are vulnerable, physically sensitive, or gentle in their movements, and to all those who had to go through some dark traumas, and emerged from them with enormous power and inner transformation.

It’s not uncommon to see the mature Pisces man single, available or divorced, or in certain cases, married but looking for something on the side.

The sign of Pisces is seen as the dual sign and this is why separations, divorces, or “open relationships” happen relatively often.

However, at this point of Pisces man’s life, his areas of romance and talents, seen through the sign of Cancer, and spirituality and second marriage according to some schools of western astrology through the sign of Scorpio, he will have enough of words and persuasion, and he will look for something emotionally deeper and more meaningful.

In this sense, he will be attracted to those individuals who are calm, attached to the home or national roots, a bit sad, but poetic and carrying.

On the other hand, he will fall for those who had to fight hard their whole life, and now are seeking peace of mind and a loving embrace.

As I mentioned at the beginning of this article, check out Anna Kovach’s book, Pisces Man Secrets, for more in-depth training for women who want a Pisces man to chase and desire her. 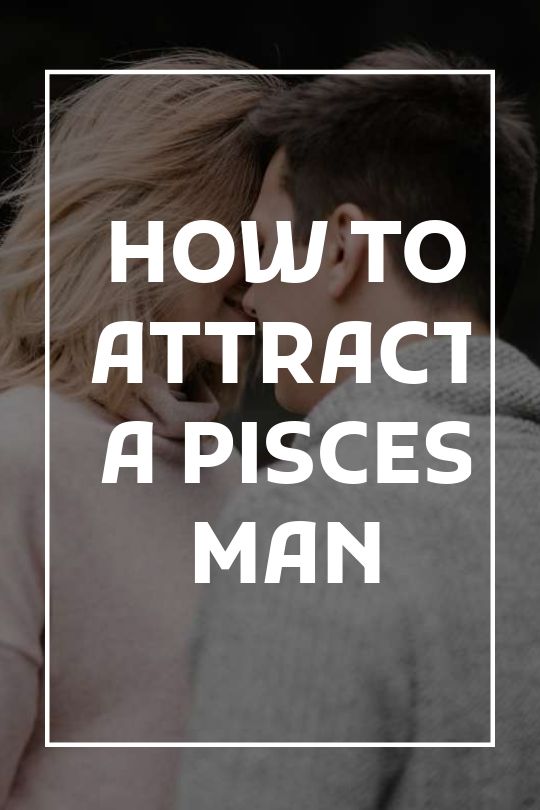