If you want to win the heart of a Pisces guy, then you need to know the best ways to text this sweet, romantic zodiac sign.

When texting a Pisces man, don’t be afraid to talk about feelings. He embraces emotional conversations and will want to text about how both of you feel. Be gentle and romantic rather than forceful and vulgar. Bond over his favorite subjects to make him feel connected to you.

If you are looking for in-depth training on the specific phrases that your Pisces man will respond to, then, then check out zodiac-based relationship expert, Anna Kovach’s book Pisces Man Secrets.

The details in Anna’s book will have your Pisces man like putty in your hands… I’d recommend that you check it out (after you’ve read my article)!

How to Flirt With a Pisces Man

When you want to flirt with a Pisces guy over texts, you should take his zodiac sign’s symbol into consideration.

Each sign of the zodiac has a unique symbol that encapsulates the distinctive characteristics of that sign. Pisces is symbolized by the fish.

The symbol of the fish tells us that Pisces men go with the flow and are generally very laid-back. They are non-confrontational and like to keep the peace, and they are more likely to stand up for someone else than for themselves.

A Pisces man is passive and in some ways, very feminine. He might be too shy or aloof to text you first, so don’t be afraid to send him the first flirty text message. He will be relieved that you made the first move and is sure to text you back.

At the same time, there is a warning hidden in the Pisces symbol that you need to remember. Most depictions of Pisces show not just one fish, but two – and they are swimming in opposite directions. This reveals the dual nature of a Pisces guy.

His flirtatious texting style shows his dual nature because while a Pisces man is okay with a woman making the first move, he is also very traditional and conservative when it comes to romance.

You can text him first, but don’t be too forward or aggressive. Instead of asking him out on a date with your first message, start a conversation with him and give him the chance to pursue you.

Pisces men are usually very creative and artistic, so you can flirt with him by bonding over one of his favorite subjects. Text him to ask about the music he loves, the new exhibit at the art museum, or anything else that inspires his creative side.

When you connect over shared interests and get him to open up to you, your Pisces crush will start to fall in love.

Before we talk about seducing your Pisces man over text, I wanted to mention an Astrologer and quiz that I recently stumbled on…

How to Seduce a Pisces Man Over Text

If you want to know how to seduce a Pisces man, you need to understand his zodiac sign’s approach to sex and romance.

Every sign of the zodiac belongs to one of four natural elements: earth, fire, air, or water. A sign’s natural element conveys a great deal about that sign’s disposition and communication style.

Pisces is a water sign, and water signs are known for being emotional, sensitive, and creative. When it comes to sex and love, a Pisces man is not interested in flings. He prefers to have an emotional connection with his partner, and he enjoys sex and seduction more when there is a deep bond with his lover.

When you’re trying to seduce a Pisces guy over text messages, don’t be vulgar or crass. A Pisces man prefers a romantic approach to sex, so he would rather you be coy and charming with him than an overtly sexual femme fatale.

He also likes it when a woman is mysterious and leaves a bit to the imagination. Don’t send him a nude photo right away, and don’t reveal too much about yourself at once. Always keep him guessing and make him work to peel back the layers of your personality and get to know you.

You can use your knowledge of his zodiac sign’s favorite colors to your advantage. Pisces is associated with blue and other ocean hues, so if you send him a sexy selfie, wear a dress or lingerie in those colors.

Just as every zodiac sign has a color, each sign also has a correlated body part. Pisces is associated with the feet, so a Pisces guy is more likely than other signs to have a foot fetish.

Get a pedicure and text him a photo of your freshly painted toenails (remember to choose shades of blue polish) or send him a picture to ask for his opinion when you’re out shopping and trying on sexy stilettos.

27 Unique Phrases that specifically turn on your Pisces man…

If you are looking for a unique way to specifically seduce a Pisces man with words and phrases, then you must check out this list. 27 Phrases to seduce a Pisces man. These phrases have been identified by Anna while working with hundreds of clients dating Pisces men.

That said, let’s talk about things to text a Pisces man…

Things to Text a Pisces Man

Whether you’re trying to seduce a Pisces man or merely flirt with him, there are a few things that are always good to text this compassionate, generous zodiac sign.

Every zodiac sign has a ruling planet that tells us something significant about that sign. Pisces is guided by planet Neptune, the God of the Seas that represents the oneness of all beings.

This means that Pisces men are highly empathetic and driven to serve others. When texting a Pisces guy, you should talk about the good things that you are doing for others and the world. You could try inviting him to volunteer at an animal shelter or a soup kitchen with you.

He is always eager to lend a helping hand, so you should also text him when you need assistance, especially with a creative project. While he’s willing to support you, he doesn’t want to feel used. You should make sure that you text him to offer your help and encouragement just as often as you text him to ask for anything.

And while he enjoys discussing others, he wants to keep the conversation upbeat rather than spreading negativity. Avoid gossiping or sharing anything salacious with your Pisces guy, otherwise, you will turn him off.

Pisces men are very spiritual and intuitive, so they embrace conversations about anything mystical or metaphysical. You won’t scare off a Pisces man by texting him about ghosts, fairies, spirituality, or religion because these are a few of his favorite things to discuss.

Finally, a Pisces guy never shies away from an emotional conversation. If you are feeling hurt or upset, your Pisces man is the perfect person to text to help you work through your problems.

Make sure that you’re there for him, too, when he texts you about his feelings so that he doesn’t feel like your relationship is one-sided.

Why Didn’t a Pisces Man Text Back?

Different zodiac signs go silent for different reasons. Some signs will ignore you when they are mad, while others turn their phones off while they are working. So, how can you determine the reason that your Pisces guy isn’t responding to your texts?

Pisces men hate hurting other people’s feelings, so your Pisces guy is unlikely to ignore you out of spite. He can be very indecisive and flaky, though, so he’s not the most reliable when it comes to texting back. He probably looked at your message and couldn’t decide on how to respond right away, then forgot to send you a response later.

Another reason why a Pisces man could be giving you the silent treatment is that he is depressed. Pisces is perhaps more prone to depression than any other zodiac sign, so your Pisces guy could be isolating himself if he’s feeling blue.

If you think he’s ignoring you because he’s depressed, do your best to reach out to him and cheer him up, even if he’s not getting back to you.

The final reason a Pisces man is ignoring you is that he’s deeply hurt or angry. He could be trying to teach you a lesson or make you feel his pain by icing you out. If this is the case, you need to apologize and show him that you won’t do the same thing to hurt him again.

Now that you have insights about your Pisces man and some strategies for texting him. There are some specific phrases that you can use to really turn on your Pisces man.

As I mentioned at the beginning, Anna Kovach has worked with many women dating Pisces men, check out her book. Pisces Man Secrets.

She can give you an exact blueprint for what phrases to say to your Pisces man in the ways that he will respond to you both physically and emotionally… click here to check out Anna’s 27 Phrases.

If you want to build a relationship with a Pisces guy, you need to know how to communicate with him, including over texts.

Don’t shy away from talking about your feelings in your messages to a Pisces man, or to ask about his. Be sweet and romantic rather than combative and pushy and try to bring up topics that you know he likes, such as music and poetry.

As long as you follow these guidelines, you will have a man born under the sign of the fish swimming straight to you. 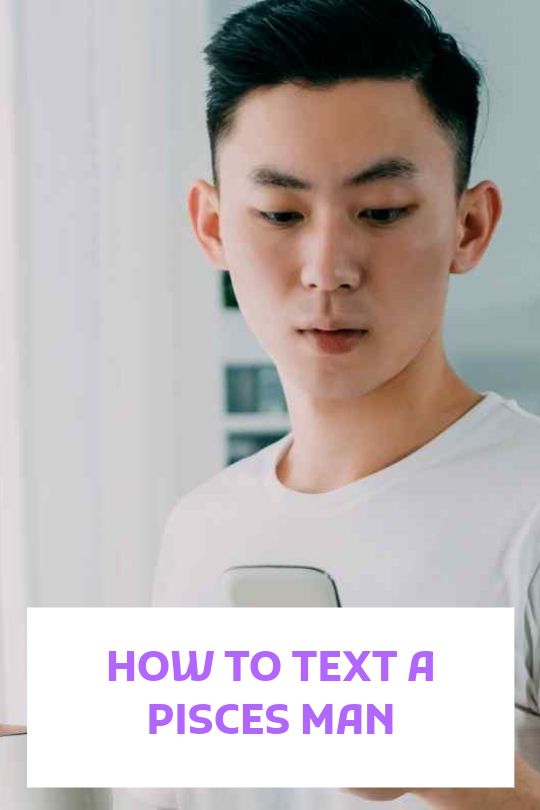