In the case that you are a Capricorn woman seeking information about marriage to (or a long-term relationship with an Aries man, then click over to the article, “Aries man and Capricorn woman in marriage”, which is written more specifically to your concerns.

So yes, let’s get into it… The Capricorn woman is ruled by Saturn, the planet of discipline, limits, and karma. She may sometimes seem cold or detached but she is actually very caring. It is that she prefers to show her love through gifts and acts of service. The Aries man is the masculine warrior. He is the go-getter and initiator. He is ruled by Mars, the planet of action and aggression.

The Capricorn woman and Aries man in marriage make an ambitious couple. This may work in their favor or not. If their goals align, the foundations for the relationship will be strong. The Aries man appreciates her independence. Communication will be smooth between them. Both will be devoted to the commitment.

The Capricorn woman and Aries man’s dating life is all about motivating one another to do better. Their union may not necessarily be competitive but they have ways to hype each other up. The thing is, they will eventually realize that they are opposites.

The strength of their partnership relies on how much they admire each other. This is even without them admitting it. As they are ruled by strong planets, the emotional connection may be a little awkward or difficult for them.

Loyalty is not something they need to worry about. It naturally follows the trust they give one another. The career will be a highlight of their relationship and will be each other’s, motivational coach and backbone in life. They will also not have an issue giving one another space as both of them are independent signs, to begin with.

For more details about “Dating a Capricorn woman… and the 12 things you need to know!” click here.

The Capricorn woman may seem unwilling or not interested in getting some action but she is actually romantic and would be the type to dress up the bed with rose petals and have some candles on the side. She will think of the ambiance more on the act.

She is not that crazy in making love but then the Aries man is the complete opposite in which he may try to persuade her to try different things which may be outside of the comfort zone of the Capricorn woman.

For 7 Steamy tips to turn on your Capricorn woman in bed, click here!

Their differences are what make the friendship 50/50. It is like they either lift or throw each other off. Some may think their friendship is weird as you have a realist and pessimist in the Capricorn woman and the carefree go-getter who does things without thinking with the Aries man.

The good things are they both like spoiling themselves with luxury items or finer things in life. They both want to achieve success and recognition and the mutual respect for one another never really ceases even if they end up arguing.

When they finally decide to take it to the next level and be in a commitment, the Aries man and Capricorn woman have the potential for marriage. If there is anything you need to confirm if the Capricorn woman really likes you, it’s when she becomes vulnerable and actually talks about deep personal things.

Remember, the Capricorn woman is awkward emotionally. She is used to managing herself to make sure she is always in control at all times. She cares about what people may think of her. She takes care of her public image and if she loves you, she thinks about yours too.

When a Capricorn woman falls in love, she becomes goofy. It will come as a surprise that there’s a side of her that’s fun but this is only revealed to an exclusive few. Then you will notice that she is becoming physically affectionate. If there is love involved, it’s not going to be with words with her. It’s gifts, acts of service, and physical touch.

The Capricorn woman and Aries man can be a power couple as the two signs have no issues bossing people around. They are naturally authoritative and are inclined to step up the ladder to success. There might be some issues with intimacy or emotional understanding because these things are not their strengths, to begin with.

Another might be a lack of time. As they chase their ambitions and recognition for success, sometimes they may forego meeting up and focus on their dreams. The relationship can be challenging but if somehow, they agree that they both like the same things and are aligned with what they want then it’s something worth investing in.

Does a Capricorn woman and Aries man work, is it a good combination?

The Capricorn woman and Aries man as a combination are great as friends and business partners. Dating and marrying is another story. It may take a lot of work from both ends to make sure the foundation for it is strong. They have distinct differences and compromise will be needed to make sure it lasts.

Marriage between a Capricorn woman and Aries man, final words…

The Capricorn woman and Aries man in marriage is a union of two bossy people who are ready to take over the corporate world. They are natural leaders and are independent even without having to marry. They have mutual respect with each other that never really goes away.

However, marriage may be challenging for these two signs because it can take a lot of effort from both parties. As they are both ambitious and career-driven, they may forego taking each other on dates until their love fades without realizing it.

The Capricorn woman does not mind a long-term relationship and looks forward to settling down. It is just that as an earth sign, she is security-focused and before she agrees on having children, she would make sure they can afford to give themselves a good life.

If they work out and have an agreement, most likely It would last for long. The two have a great capacity for faithfulness. Besides, the Capricorn woman is the type to make things work if they can still be saved however don’t wait for too long because when she finally says she’s done. She will feel sad but will keep moving forward. 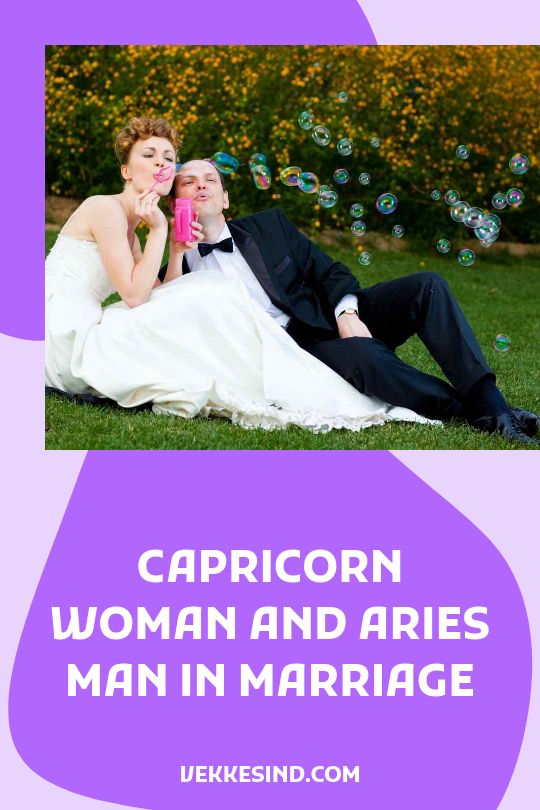