The Capricorn woman is independent, ambitious, and determined. She makes a natural leader and has a type of strength that is firm and innate. Practicality and resourcefulness are traits that are commonly found with her. In love, she is dedicated but can sometimes seem like she’s detached.

The Capricorn woman in marriage is an excellent choice if you’re looking for a dependable wife. Someone who is loyal and is responsible. The Capricorn wife is not emotionally expressive. She will work hard to make sure the family image is seen as immaculate and aims to bring pride to her husband whenever she can.

The Capricorn woman in courtship

In love, the Capricorn woman is not the most romantic, but she does have her own ways of showing affection. She is not your typical lady. She will not write poetry for you or express she loves you. Instead, it’s about her dedication to being someone you can rely on when things are tough.

She is also independent and sees weakness in needing to rely on someone. The Capricorn woman is slow in love and sees it as an investment. She does not want to risk anything she might find unworthy. Though she might be serious most of the time, she does have a fun side, that only an exclusive few can witness.

For the Capricorn woman, if you can respect her, then she translates that as a form of love. She is authoritative but she will not try to dominate her partner, she will still respect that he needs his spotlight. She is attracted and inspired by successful people; she takes them as role models that she would like to be part of one day.

OK, let’s look at marriage with a Capricorn woman…

Marriage with a Capricorn woman

The Capricorn wife will seem detached

When you haven’t gotten close enough with a Capricorn woman, most of the time she gives an impression of the CEO or executive that knows her worth and demands competency. She may give others a discriminative look even if it’s not her intention to do so.

The Capricorn wife takes time to be vulnerable. In fact, she sees that as a weakness because she doesn’t want to be a burden to anyone. She will not show her love in kisses and embrace but on showing up to your games, events, and moments that you might want her to be in.

She may not be physically touchy and affectionate. You also cannot demand her to be more of that. It will just be awkward. There is this experience where a friend grew up with her two Capricorn brothers, they seem anti-social and very busy with their own lives. They just seem independent that as long as they are able to do what they want, they’re very much alright with being single.

It’s actually an honor to be a Capricorn’s priority, as a wife, she will want to make her husband proud and that may include her husband’s family too.

The Capricorn wife is practical and resourceful

The Capricorn wife would have a dislike for wasting resources. She is practical, meaning you may surprise her with a gift but if the situation is not good economically, she might not give you the reaction you’re expecting.

For the Capricorn wife, she would rather spend the money on bills and only after everything is paid then she can allow herself to enjoy going out, eating in restaurants, and traveling. She also has no problem being a notorious penny pincher.

She will gladly cut coupons and use discount vouchers like it’s the Bible. She’s happiest when she knows she did better or when she is ahead of the crowd. Of course, it doesn’t mean she is all about quantity. The Capricorn wife prefers quality but she is flexible in a way that she can live with whatever she has.

When things get tough financially, she will take the initiative to work so that her husband will have someone to lean on. Even if there is no lack at home, she might have a business of her own because she does want to have a form of recognition of her own.

Basically, the Capricorn wife is realistic. She might even be stereotyped as a killjoy because of it. She might be misunderstood as pessimistic but she really just wants to look out for the family and people she loves.

The Capricorn wife makes a faithful and dedicated partner

If you intend to marry a Capricorn woman, just be straightforward with her. She dislikes wasting her time and effort. If you cannot see yourself being with her until you grow old, then please leave her alone. She will not be the type to cheat on her man, she respects her reputation and how she would look to others too much to allow that to happen.

She is also quite disciplined. You might tell her this is what you want and she will try to make sure it is done in perfection. She is capable of great sacrifices. They’re the type of parents or partner that would be a worker in a foreign country if it means a better life for her family. She would sacrifice her own comfort just to provide a good life to them.

The Capricorn wife does have her own type of sensitivity

Remember when the Capricorn wife really cares about her reputation. Well, it is even worse if she is made fun of. She likes to be seen as established and well-respected. Maybe this is a form of ego on behalf of the Capricorn wife.

When someone embarrasses them publicly, she might make a plot to return the favor. She might plant rumors into people and wait for the downfall of that person. If anything, Saturn, the planet that rules Capricorn is associated with karma.

Most of the time the Capricorn wife was raised to be an adult too fast. She was serious as a child or very limited in being able to express herself. She took the pressure of expectations that made her into who she is today. She is tough and does not give up easily.

If you are looking for a sweet, nurturing, and understanding wife, it won’t be a Capricorn. She is stoic. She is down to earth and accepts reality as it is. As a Stoic quote would say, “No man is free who is not a master of himself.”

That’s why she always challenges herself to live the best while being aware of her limitations. She only moves beyond what’s in her control, if you see a Capricorn wife that is demanding and almost indifferent to the situation to get what she wants, then she has never truly mastered herself and is a slave of expectation.

There might be two types of Capricorns at this point. There’s even a thread that suggests that the more a Capricorn wife ages, the more childlike she becomes. Maybe that’s when she realizes not everything goes to plan and life would still have its surprises.

If there’s an easier way to do things, let a Capricorn wife know. She would surely appreciate it because she is practical and realistic.

Sometimes the Capricorn wife wants to be the boss, and there are also times that she is alright being the best employee of the year. Her driving force is about being recognized. It is not like Leo that he desired to be praised, but in a way that she is able to prove to herself she is something.

This is why, even without problems, she would already be ahead of it. It is why, that when there is a crisis, she will take the lead. She is ambitious and she wants to be known for what she does one day, not for fame but to leave a legacy to her loved ones.

The Capricorn wife needs a partner that is supportive of her

It would be heartbreaking if the Capricorn wife marries someone that does not allow her to chase her dreams. If she is married to someone who constantly reminds her of her shortcomings. The Capricorn wife will surely be driven to insanity if placed in that predicament.

Therefore, it would be great if her partner is like a Cancer man, someone who is gentle, nurturing, and has a healing personality. Most of the time we are our own enemies by tormenting ourselves with our imagination. There is even this story of an African tribe where if one is devastated, the whole village will sing his song to remind him of his purpose in life.

The Capricorn wife surely needs someone who will help her not to get lost in her own ambition and expectation. Someone who is able to love her despite her position in life. When you are able to nurture her and strengthen her, she rarely disappoints and might even be the catalyst for a better life for the family.

Marriage with a Capricorn woman, in a nutshell…

The Capricorn woman in marriage is an excellent choice for those who are looking for a high-quality woman that is also in control of her emotions. The trade-off is, she is not as romantic as you would imagine a woman should be. She won’t be the type of woman that dreamt of her wedding since she was young.

You would see her instead, dreaming of success. She would desire to be associated and have a network of powerful people. She is feminine but masculine and she wants to be able to provide for her loved ones. Her love language is through gift-giving and acts of service.

If she does have a career of her own, she may be guilty of putting her work first. Remember, for a Capricorn wife, love is not always about flowery words and being able to embrace. It’s about being responsible and taking in the burden of her loved ones so they don’t have to.

A Capricorn wife is capable of great sacrifices. She is also not prone to infidelity. In fact, there is more to life than being married for her, it would just be a nice thing to have. She would choose to trust her partner rather than be suspicious of him.

She is a realist. She is stoic. The Capricorn wife is strong because the world made her to. She is under pressure even when she is alone. They normally have good intentions and despite their ambitious personalities, deep inside, what makes them happy are the priceless things. If you can give her respect and appreciation then she won’t ask for anything more. 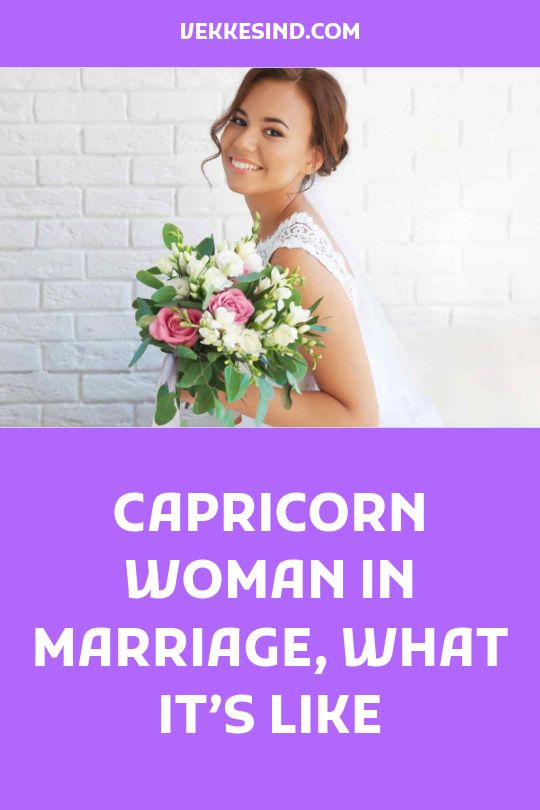