The Capricorn woman is ambitious, practical, perfectionist, and can put herself to a high standard. She has a set of ideals that she wants to reach. She is long term planner and is motivated by achievements and a rise in status. In love, she knows her worth and will not settle for someone who does not know how to appreciate her.

When a Capricorn woman is done with you, she will only see your faults. She is focused on the things you weren’t able to fulfill and broken promises too. She knows her worth and what she can offer thus, will not settle for someone who would feel like a weight to carry.

That said, let’s see what it look likes when a Capricorn woman is in love…

The Capricorn woman in love

When a Capricorn woman is in love, she likes to spoil her partner. She would enjoy giving him gifts without him expecting anything in return. The Capricorn woman may express her love through purpose and acts of service.

As she is ruled by Saturn, she may come across as cold or unemotional, she may not be as fun as the other signs when in love. Yet, she makes a reliable partner and is sincere in her relationships. They’re the type to ignore and not bother your existence if they don’t have any plans to do with you. She really just pours energy to those that matter to her.

The Capricorn woman is practical and likes to have clarity in her relationships. As a partner, she is responsible and is looking for someone who is as goal-oriented as her. The Capricorn woman is an intensely devoted lover but contradicting because she lacks the emotional depth that we usually associate because of romantic movies.

When you decide to love a Capricorn woman, she will love you back by giving you security. She will reward you with a good public image and put your needs first above hers. She understands that love isn’t about rainbows and butterflies but it is also paired with sacrifice and hard work.

7 Clues a Capricorn woman has moved on

She channels her anger through work

When a Capricorn woman is dumped or she has let you go, she will redirect her energy in a practical way. There is a reason why Capricorn is exalted in Mars, the planet of aggression because it converts the energy into something useful.

She was probably already a workaholic before the breakup but the Capricorn woman will volunteer for extra work or overtime, she gets the incentive and she also gets over you. When you see her working more than she usually does, this may not be a good sign if you are seeking to get her back.

Most of the time, she’s motivated to move forward with her life. For the Capricorn woman, it seems that whatever she invested in the relationship is a waste and a setback and she needs to get her life together even without you around.

She could be regretful towards you

Capricorn can be a pessimistic sign, this is because Saturn, the planet of limitations, is their main influence. So, a Capricorn woman that is done with you would be full of remorse for the failure of the relationship. For them, failure is one of their biggest fears and dislikes.

The Capricorn woman would be critical of herself but she would also take note of how she can make sure it doesn’t happen again. One way of doing that is to ensure she will not take you back. She knows that some habits die hard.

She would remember all the promises you said you’d do; she will feel disgusted about putting faith in you that you were different. However, don’t be misled. The Capricorn woman has a natural stoicism to them. She knows that sometimes things are beyond her control but she can focus on her actions moving forward.

She starts to distance herself away

The Capricorn woman will gradually decrease her time with you when she becomes uninterested. She may advise you that she took overtime at work or she’s enrolled herself in a course on the weekend. If you end up meeting her with friends, she will not pay attention to you but talk to someone else, or excuse herself and go home.

Capricorn actually has no issues removing people from their life. She is detached that way. The Capricorn woman’s style is not of the nurturing mother but of a provider. You may say she was already distant by not being emotionally expressive, but when she still loved you, she was supportive of what you do and you could rely on her for things that most people would overlook on.

Also, when a Capricorn woman is done, she may give you the silent treatment. She simply doesn’t want to be bothered. Remember when you needed advice from her, she was not the best at comfort but she was direct to the point and she will give you the direct answer on how you can best assess the situation.

She thinks she can do better

The Capricorn woman will not be sorry for being single. She knows that it is better to be one than to settle and be disappointed throughout her life. Capricorn is not reputed to have wandering eyes but it is not impossible. Though she has conscious control of her desires, if she does end up seeing another man so quickly, it may mean that she thinks the relationship you had with her does not have security and is unable to see her future with you.

She doesn’t look out for you

A Capricorn woman is protective. She will stop doing those things that look out for you once she is done trying to make it work. She is not the type of woman that will beg someone to stay, she does however have a jealous side when she cares for someone.

The Capricorn woman will express this through her body language or sarcastic remarks. She is the traditional woman and is the kind of wife that will be ready to fight with her husband to the very end, for better or for worse.

When she no longer wants to continue the relationship, you would instead feel coldness, carelessness, and neglect. The Capricorn woman will no longer give advice even if she thinks you need it.

She doesn’t put up a fight at all

When a Capricorn woman has had enough, her motto is always, just ignore, as she is practical, so will she conserve her energy on things that are productive instead. When she doesn’t make an effort to prove her point or explain her side, it is a sign that she has totally given up on the relationship.

It is easy for the Capricorn woman to cut cords with people. She does this so naturally, she doesn’t even realize it. Maybe if she still cares a little, she might care about the opinions of others because she still thinks about public image, but that still isn’t a sign that she wants to get back with you.

She sets you aside and becomes self-centered

The Capricorn woman that is moving on will become selfish, at least on how we see it. As she is cardinal, she may not forgive easily. Resentment is something that she might store for a while, even if you get her to come back, it will be toxic and things will just not be the same ever again. Consider holding a funeral for your dead relationship.

She will stop helping you unless she knows she gains from it. The Capricorn woman becomes manipulative, but she doesn’t realize this most of the time. She may also become materialistic and power-hungry now that she is not able to love you. It is unlike when a Capricorn woman loves wherein, she is able to put her loved ones’ needs first.

When your Capricorn woman is done with you, final thoughts…

The Capricorn woman is done with you when she is not able to meet you halfway, she is detached, and basically uninterested. She has already cut cords with you and has become critical of your actions. She will remember each disappointment you made her feel and that will be her motivator on not to take you back.

She understands that old habits die hard and since she is growth-oriented, she will need to replace them with something better. The Capricorn woman begins to make plans without you in her mind. She begins to focus on her own future.

The Capricorn woman in love makes a reliable and devoted partner. She loves in a way that’s not in your face. It is subtle, unemotional, but she does this through actions and by providing her partner what she thinks he needs and is supportive of his dreams in life. 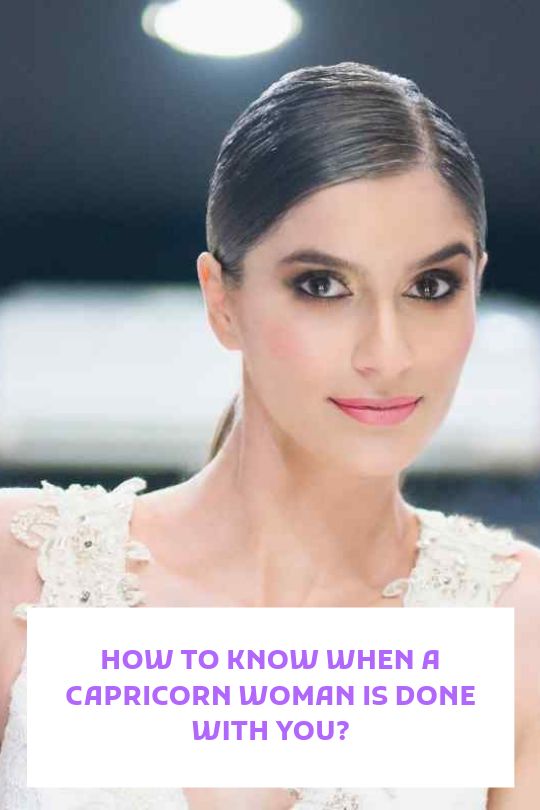