Moon’s position in a natal chart is extremely important because this placement reveals our inner needs and vulnerability. All about the “quality” of the soul will be seen through the native’s Moon, and therefore, it will give us valuable information about most of the person’s intentions.

Moon in Aries is not in such a good place since Aries is the fiery sign and symbolizes action, initiative, fights, and zest for life in general, while Moon is all about the need for safety and emotions. This is why Aries Moon person could appear senseless, or even cruel if they find themselves “trapped”.

If you aren’t sure about your Moon sign, check this free Natal Chart tool…

If you’re looking for a free personalized Moon reading, click here, to explore the secret depths of your personality, relationships, and true purpose in life.

The man with Aries Moon will surely have a distinctive glance. His eyes will look sharp and determined, yet sensitive. And he will seduce by keeping quiet and looking directly at the person of his interest. He could have some issues with his eyes later on in life, related to blood pressure. And he will surely be sensitive to light and possible migraines.

His complexion will be lighter as well as his hair, no matter which race or nationality he belongs to. And there will be some strange quality of his skin or the whole appearance like he will seem “clean” or like he just walked from the shower all the time.

Emotionally, Aries Moon man will be perceived as someone very secretive. He won’t show openly his emotions. And when he does, those expressions will look powerful and last for a short time. He will have a quiet, yet unclear relationship with his mother. Their communication will be short, lack open emotions, and dancing on the edge of misunderstandings.

Something similar will happen all the time in Aries Moon man’s love life. Once he falls in love, he will have some strict inner rules, and as long as his partner is happy and shows happiness, he will feel emotionally secure. However, the moment his partner starts complaining or goes through some period of sadness, he will instantly become afraid because he wouldn’t know what to do or how to act in those situations. And from the point of fear, all sorts of negative situations will be born.

Who is the Moon in Aries man attracted to?

Moon in Aries man is attracted to someone who has their natal Sun, Moon or a rising sign in Libra, although all other air signs and also fire signs will get along well with him. He basically seeks someone who will admire his strength and initiative. And this will be his basic emotional “fuel”.

He will love to feel emotionally secure while trying to conquer the world. And he will connect and attach to the partner who will never initiate the fight nor have emotional fluctuations because those expressions will scare him the most. In general terms, the ideal partner for him is someone who will act as a safe haven.

Surely he will have lots of insecurities like all people do, but he will keep them strictly private. And what is more important he won’t fall for the partner who will try to “sneak” into his soul and reveal those insecurities, but for the one who will give him unconditional support and let him lead the way. And slowly, in time, he will show his vulnerable side.

This is why it’s not advisable to act as a psychologist in front of him, ask all “risky” questions, and ponder about his answers out loud in his presence. The safest way to his heart is to listen, understand and admire any effort he makes, and that will ensure his respect and later on, his admiration.

A woman with Aries Moon looks will always be focused on her eyes, which will surely be lighter and with some sort of the “electric” quality in them. She could be prone to headaches, and especially her right eye could be weaker or prone to increased pressure. She will have a distinctive forehead and always wear lighter hair.

Her body shape could differ depending on other planetary aspects, but she will be known for her determined tone of voice, and when she speaks people will surely listen. Aries Moon woman will have a strict list of rules in her life, and once she knows what she wants, she will focus fully on her goal. At an early age, she will get a glimpse of her future, and then she will just move toward it, step by step, but as fast as she can.

Aries Moon woman is never patient and full of understanding, although she has a pure, naïve, and almost childish type of soul. However, her lack of patience and tact will create several obstacles throughout her life, and she will then fight hard, simply because she loves to fight and prove she is right all the time.

Who is the Moon in Aries woman attracted to?

Some problems are foreseen with this lady because Aries Moon woman will be attracted to strong and masculine partners on one side. However, on the other, she will easily become annoyed and frustrated if her desires don’t come first and her leadership is neglected.

This inner conflict will have its origin in an early relationship with her mother or motherly figure who was always strong, too strong in so many examples. And she will act like her mother, but she will seek someone who is psychologically equally strong as she is, not being aware that masculine energy will be repelled by her behavior.

In this sense, she will fall for powerful figures, but the moment she starts communication with that person, they will feel odd and pull back. And she will find her happiness with someone who acts quiet but acts masculine in a non-verbal way. The best compatibility for Aries Moon woman will be seen with the person with their Sun, Moon or rising sign in Libra, other air signs like Gemini and Aquarius, and also with fire signs, Aries, Leo or Sagittarius.

On a positive note, Aries Moon woman will be righteous, practical, fast and she will never be afraid of the hard work and dedication to any worthy goal. 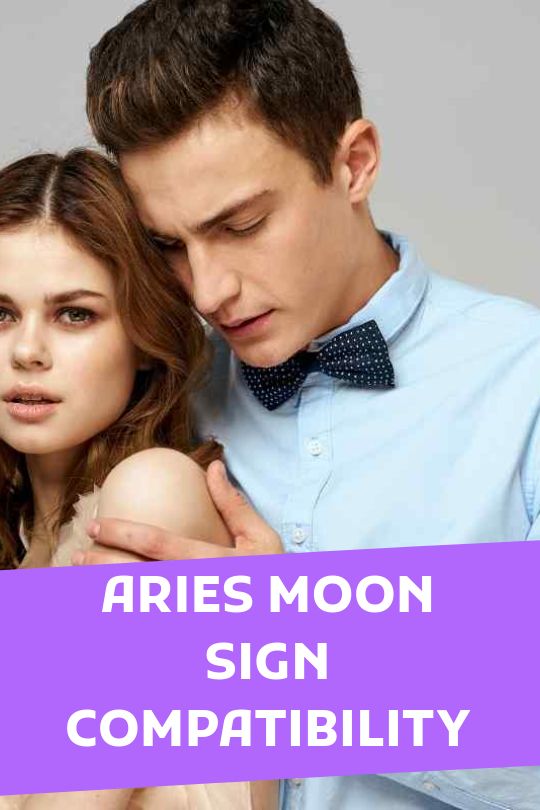