Even though it has now been more than 50 years since The Beatles broke up in 1970, the question of who caused them to break up is still deliberated. Some have long blamed John Lennon’s wife, Yoko Ono. Others have blamed Paul McCartney. However, Paul recently said John initiated the breakup of the band.

The real culprit for the breakup of The Beatles, however, could simply be the Saturn cycle. John and Paul began making music together in their mid-teens, at an age when everyone experiences their first Saturn opposition. When they had their first Saturn returns as they approached age 30, it was time for the structures of their lives to change.

For many astrological techniques, it is very important to know exactly when and where a person was born. When you look at the Saturn cycle in a person’s life, however, you can tell a lot just by knowing roughly how old they are.

The Sun moves through all 12 Zodiac signs over the course of each year, which is where your Sun sign comes from. The planets and other celestial bodies also move through the same 12 Zodiac signs, but they each go at their own pace.

For Saturn, it takes 29.4 years to move through all 12 Zodiac signs. Everyone, therefore, has a Saturn return when they are in their late twenties, approaching age 30. A Saturn return means that Saturn has returned to the same place in the Zodiac where it was when you were born.

The symbolism associated with Saturn has to do with authority and structure. The Saturn return is therefore well known as a time when life structure issues demand to be addressed in a dramatic way. People may either begin or end marriages or begin or end a commitment to a particular profession. They may also become parents.

If you have your first Saturn return at age almost 30, you have your first Saturn opposition at half of that – around age 14. Many religions hold ceremonies, such as the Jewish bar or bat mitzvah and the Christian confirmation, for people close to this age to mark the beginning of their adult role in the faith community. The physical changes of puberty are usually underway at this time too.

By the time you’re 14, you probably know which subjects in school are your strengths and your weaknesses. Even if you don’t yet know the exact details of what you want to be when you grow up, you may be developing a general idea. In many countries, people also begin high school around this time, and some high schools have a focus on preparation for a particular type of career.

When John and Paul Met

History.com records that John Lennon and Paul McCartney first met on July 6, 1957, when Paul attended a performance of John’s skiffle band, The Quarrymen, at the Woolton Parish Church Garden Fete. Though both Lennon and McCartney grew up in Liverpool, England, they lived in different neighborhoods and attended different schools.

After the performance, a mutual friend of John and Paul introduced them. Paul, who had brought his guitar, auditioned for The Quarrymen and was accepted two weeks later.

The Beatles Bible goes into more detail about the timeline of that fateful day. The Quarrymen first performed at an afternoon event that began at 3 p.m. They then had an evening performance at 8 p.m., and John met Paul while The Quarrymen were setting up for the evening performance. I have therefore cast the astrological chart for their meeting at 6 p.m.

Even if the time of their meeting is not quite exactly known to the minute, a very important feature of this chart is that Paul was still experiencing his Saturn opposition when he met John.

On July 6, 1957, Saturn was at 8° Sagittarius. In Paul’s birth chart, Saturn is at 5° Gemini, the opposite sign from Sagittarius. Though the degree numbers are not quite exactly the same, they are close enough that most astrologers would find the correspondence significant.

Everyone experiences their Saturn opposition and Saturn return at about the same age regardless of what sign Saturn was in when they were born. However, in the case of Paul McCartney, it is very interesting that Saturn was in the sign of Gemini when he was born.

When George Joined John and Paul

Paul attended The Liverpool Institute High School for Boys, where he met George Harrison, and George’s connection to the group grew from there.

The date that George met The Quarrymen is harder to pin down than the date that Paul met John. The best estimate The Beatles Bible has is February 6, 1958, shortly before George’s 15th birthday, though it makes note of other estimates as well. The time of day is unknown, so I made the chart for 12 p.m.

George, like Paul, has Saturn at 5° Gemini. Though George was eight months younger than Paul, they were on the exact same schedule for Saturn oppositions and Saturn returns.

The planets, at least in relation to Earth, appear to move backward through the Zodiac signs at times, and these times are called retrogrades. Due to the irregularities caused by retrogrades, not everyone has their Saturn return at exactly age 29.4 or their Saturn opposition at age exactly half of 29.4. These milestone Saturn transits occur more within a range, kind of like toilet training a toddler – some kids are ready earlier than others, but almost all of them are out of diapers by kindergarten.

By the time George met The Quarrymen, Saturn had moved ahead to 23° Sagittarius, so he was a bit past his Saturn opposition. While Gemini is often associated with relationships and connections with other people, it can in some cases be associated with technical skills as well.

The major event of George’s Saturn opposition therefore may have been developing the strong guitar skills that convinced John to let him join the group in spite of his youth. George, born February 1943, was only about two and a half years younger than John, born October 1940, but that can seem like a big gap for teenagers.

The more significant astrological transit George was having when he met The Quarrymen was that transiting Jupiter in Scorpio was making wonderful aspects to his chart – conjunct his Moon in Scorpio and trine his Sun in Pisces. Jupiter can be associated with good fortune, and this was definitely George’s lucky day!

The four-man lineup of The Beatles – John, Paul, George, and drummer Ringo Starr – was finalized in 1962. (Birth data for all four of The Beatles is available on Astro-Databank.) For the rest of the turbulent decade of the 1960s, The Beatles were a revolutionary musical and cultural force.

As The Beatles changed the culture, they themselves also went through dramatic changes during their time together. The breakup of The Beatles came to be known on April 10, 1970, when Paul made a press release in advance of his first solo album, as reported on History.com.

On this date, Ringo, the oldest Beatle, was 29, three months shy of his 30th birthday. George, the youngest Beatle, had recently turned 27. All four men were pretty close to Saturn return territory.

Ringo, three months older than John, also has Saturn in Taurus. On the date of the breakup announcement, Saturn was at 9° Taurus, very close to Ringo’s Saturn at 12° Taurus and John’s Saturn at 13° Taurus.

It’s certainly fair to say that the breakup of The Beatles was a big part of the Saturn returns of John and Ringo. The aftermath of the breakup then, of course, dragged out long enough to take in the Saturn returns of George and Paul as well. Paul especially was involved in a legal battle concerning issues related to the end of the group, but all four Beatles released at least one solo album after the group broke up.

Because Paul made the public announcement, some blamed him for the breakup of the band. Revisiting the subject in 2021, however, Paul said that he had wanted the band to continue and that John had initiated the breakup.

Rolling Stone, covering Paul’s 2021 comments, noted a remark Paul made shortly after the breakup: “Ringo left first, then George, then John. I was the last to leave! It wasn’t me!”

Could Things Have Gone Any Differently?

For some people, their Saturn return in their late twenties is a positive experience where they achieve a goal they have been working toward since their teens. One example of this in the music world is Lizzo, who took on the name Lizzo and made her first rap group when she was 14, around the time of her Saturn opposition, and then achieved breakthrough success with her album Cuz I Love You shortly after her Saturn return.

When people have the difficult kind of Saturn return where something falls apart, though, it is common to ask whether things could have gone any differently.

Saturn is often associated with structure and limitations imposed by external authority figures, but it can also simply define where you begin and end. Your Saturn return may therefore demand that you stand alone as an individual in some way.

Musicians who have been working as solo artists all along might therefore have an advantage with that aspect of Saturn returns. For example, Taylor Swift moved to Nashville, Tennessee, at age 14 – around the time of her Saturn opposition, of course – to pursue her music career. When her Saturn return hit, she did go through a period of personal and professional upheaval, but she remained a successful solo music artist throughout as well as afterward.

At the other extreme, the aesthetic The Beatles pursued in their early years, when they wore matching suits, seemed to erase the individuality of each band member. A situation where there are blurry boundaries between people, even if there are components of this situation that feel really good at the time, is likely to result in a difficult experience when one or more of the individuals involved experiences a Saturn return or other Saturn transit.

While Yoko Ono, John’s second wife, may have been the most attention-grabbing Beatle wife, one easy factor to identify in the breakup of The Beatles is that, as they aged into their late twenties, they all accumulated marriage and family commitments. The challenges of moving into that new phase of life strains many friendships formed in the teenage years.

Also, people may outgrow relationship dynamics that worked well enough for them when they were teenagers. Maybe it made sense for George to defer to John and Paul when he seemed much younger than them, and their songwriting skills were stronger than his. The group dynamic, however, did not adjust well enough when George finally did hit his growth spurt as a songwriter.

Perhaps the title of George’s post-breakup solo album, a three-LP set full of material that he substantially stockpiled while he was still a Beatle, summed up the situation perfectly: All Things Must Pass. 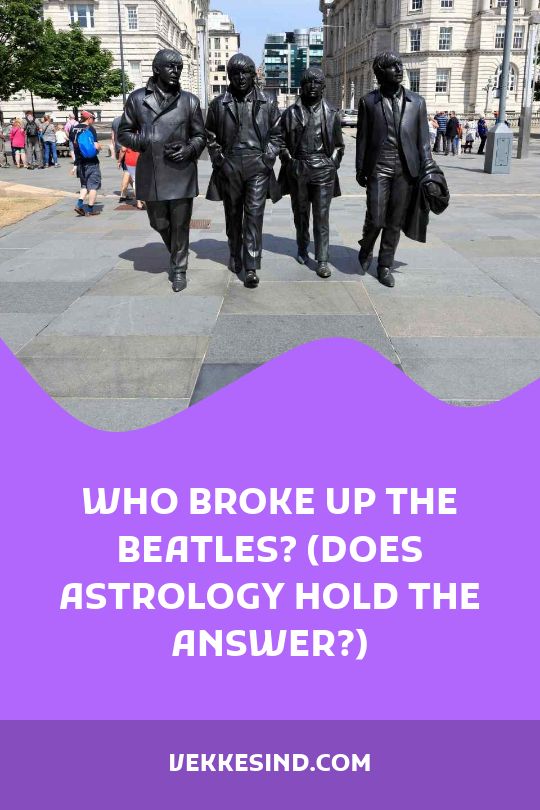