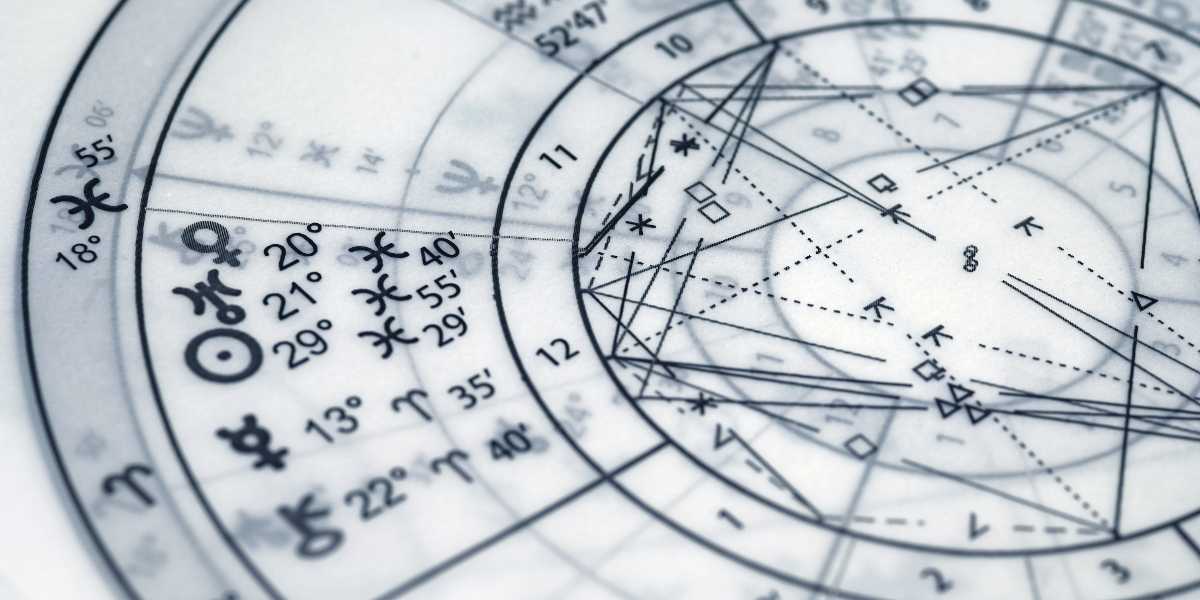 The T-Square is a pattern created in the birth chart when opposite points or planets form a square with a third planet, forming the letter ‘T’. The squared point is the focal planet, serving as the arbitrator of the two planets in opposition. These three points can spur impulse and resolution or struggle and tension.

Before we get into the details about the t-square, I want to point out the Related Articles section at the bottom of this page. I have assembled several articles that I know you will love. Make sure you check them out!

The two planets in opposition form 180 degrees in angle, while they meet with the third planet by square or 90 degrees. The third point is called the apex or focal planet and is situated in the middle of the two opposing points. This is taking us back to our geometry class, I know.

Note that planets have discussions and they are competing against each other. Each of them wants to be dominant and no one wants to be yielding to the other. It is important to grasp the aspects of these planets and really get to know them.

Knowing each planet’s characteristics and the areas of life they control will provide you with an insight toward particular aspects. It is also vital to know which of the planets make excellent acquaintances and which of them do not.

Since each planet represents the different areas of our lives, there will be conflict. Friction can be perceived until the three planets in the T-Square formation have worked out their challenges.

They dislike and distrust the arbitrator because they know it is not their ally so they are also in a dispute with it.

How Do We Interpret T-Squares?

In reading T-Squares, it is always necessary to consider the modes of astrology, whether it is all cardinal, fixed, mutable, or a mixed of these three. The three modes in astrology determine how forces flow. They define the characteristics in which they can be applied to every viewpoint of our lives.

Let us take a brief look into the three modes of astrology to get a better grasp of its relation to the T-Square.

The Cardinal signs are Aries, Cancer, Libra, and Capricorn. Cardinal signs are very oriented to action and friction. They tend to be the most ambitious among the signs. They like starting brand-new ventures, working on them instantly, and never stopping until they attain success.

Sometimes there is an inclination to overdoing things. The cardinal T-square needs something dynamic and powerful, which often leads to some struggles. An individual who has this kind of aspect pattern in their chart needs to discover how to use its energy efficiently.

They need to learn how to be composed and to settle.

The Fixed signs are Taurus, Leo, Scorpio, and Aquarius. Fixed signs tend to be arrogant, resolute, and uncompromising.

These signs are so much driven by a passion that they continue working until they reach their aim. Fixed signs tend to be stubborn and unchangeable. Because they are resistant to change, the fixed T-square often gets stuck to certain situations.

Folks who have this aspect pattern sticks to whatever it is that gives them security. If energy is used efficiently, then they could apply it to create something constant and reliable in their life.

The Mutable signs are Gemini, Virgo, Sagittarius, and Pisces. Those with mutable signs always feel the need to disperse their energy.

They are influenced by a lot of concepts and are always evolving. They are very adapted to training settings. They like collecting knowledge and passing them to others. Mutable signs are pretty versatile.

What mutables need is something to bring more discipline to their spirit.

The Element of the Signs

It is also important to consider the element of the sign where the focal planet lies. This will represent the action created by the T-Square.

Air signs are Gemini, Libra, and Aquarius, while Earth signs are Taurus, Virgo, and Capricorn. Fire signs are Aries, Leo, and Sagittarius, and Water signs are Cancer, Scorpio, and Pisces.

In general, air signs are intelligent and inquisitive, earth signs are moving and rational, fire signs are instinctive, and water signs are delicate and emotional.

The planet’s House, as well as the focal planet, are important because they will determine where the tension arises from and where it will exhibit.

How Do We Solve the T-Square Conflict?

Complex aspects exist to provide us with the chance to understand them and use them to our advantage. It is an acquired knowledge so some individuals that have T-squares in their natal chart have become successful in working it out, while others do not.

Can this struggle be solved?

Solving the T-Square is having to locate the point where the squared planet is in opposition to. Remember that you must determine the sign and the house where the point lies and that is where you need to concentrate on.

Whatever is in that point is what you need to learn. This point develops the balance and characteristics in somebody which eventually solves the friction between the three planets in the T-Square formation.

The stress out of the T-Square will only be eliminated by determining what is missing. Having solved the conflict will grant great security to one’s life and personality. The T-Square conflict encompasses character and individuality.

The qualities relating to the planets within the T-Square can be severe and demanding. One should be capable of working with the energies and it is essential to be adaptable because T-Square is a force that is difficult to change.

The T-Square aspect is usually found in the natal charts of CEOs, managers, and leaders. Having been born with T-Squares in their chart, these people tend to be conflicted in their lives.

However, they have learned to develop the discipline and strategies they need to succeed in their careers.

Do you know that known people who have the T-Square aspect pattern in their birth chart include a bunch of singer-songwriters from around the globe?

The list includes Shirley Manson, Siouxsie Sioux, Debbie Gibson, Nelly Furtado, and Joan Osborne. These people learned to use their T-Square aspect to their advantage and have flourished in their field.

The T-Square Aspect Pattern: in a Nutshell

Aspect patterns in astrology include three or more planets arranging in various forms.

In the planetary aspects, the planets operate as a system and are always working collectively. There are seven major aspects:

And, there are also the multi-planet aspects:

Working with aspect patterns is a complicated task. It is difficult, especially at the beginning, to attempt to learn and understand the aspect patterns. It involves interpreting not just one planet, but the synergy between two or more.

One of the many aspect patterns is the T-Square. This pattern is created when two planets on the opposite sides plus a third planet (the focus) form a triangle. The combination of these three points incites impulse or tension.

We can work on this tension by trying to find the balance. Locate the point where the focal planet is in opposition to and determine the house and sign of that point. That is what you need to focus on.

Remember: The core of working with the T-Square is exploring diverse means of clearing the burden and strain caused by the squares by driving action with the focal planet.