In the Two of Swords, the pure ideas of the Ace undergo separation and differentiation. Variables are evaluated and a correct choice must be made; this is the second step of the analysis, the silent level-headed power of reason, but also the buildup of conflict. The abstract streams of thoughts and words attain a much more specific, rational, and familiar human form.

Pamela Colman Smith’s illustration of the Rider-Waite card shows a blindfolded woman in a white dress holding two swords in front of her chest. In the background, we notice a crescent moon over the waters and islands of unconscious emotional realities.

Let us close our eyes to think and brace ourselves as we examine the Two of Swords’ dilemma, symbolism, and meaning.

For the decimal suit of Swords, the Two is as good as it gets, a second-best chance. Look at the cards beyond this one, from Three to Ten, and you will see that the Swords indeed thrive only in simplicity and oneness; the more knives amassed, the more complicated things get, and the mind can only handle so much information at a time.

The woman of the card is just beginning to grasp the mysteries of life but at least she’s found herself in a place of tranquility. She is currently purifying her thoughts, as the white gown indicates, to protect herself from the darkness. Pondering over an important decision, she must find a way out of shallow duality.

Undeniably, she resembles the two serious ladies of the Major Arcana: Justice and the High Priestess. But while they possess mastery over their respective fields, she is still a doubtful initiate who is getting ready to search for answers — she has yet to trust her intuition and cognitive abilities.

The passivity and receptivity of the number 2 are quite obvious. What’s missing here is the Priestess’ veil and an overall sense of relaxation; the woman is still exposed to emotional tension, still trying to distinguish true from false, virtue from vice, and so on. Confusion and uncertainty linger — the unshakable order of Justice is but a dream for her. She also desires the perfection of the 11 but because she’s far from it, she must settle for an incomplete and temporary notion of symmetry and harmony.

Distrusting her senses, analyzing her thinking process, and having reached the liberating emptiness of the meditative void, she is nonetheless a force to be reckoned with. Though her eyes may be closed, she is alert and awake. The subtlest move around her, an infinitesimal change in the environment, and she’s ready to strike!

One might quickly dismiss this card as an utterly negative one, given that this woman is essentially blind and unable to solve a daunting dilemma. However, as it is clearly demonstrated here, there are two sides to every story. Isn’t it obvious how comfortable she feels in her plight, her rigid posture evidence that she may not be moved without her consent? How does she balance two giant swords with ease in front of her chest, guarding her vulnerability and innocence, her soul and mind? How through detachment does she advocate equity, kindness, and peace, weighing her decisions impartially?

Be that as it may, the Two of Swords’ problematic nature must also be addressed. A weight is pressing down on her chest, that much is certain, and the lady in white could be anxiously burying her head in the sand to avoid what’s right in front of her. Unable to arrive at a sound verdict, she has reached an impasse, a double bind from which one can escape only through change. But the Sword does not like change; it is, after all, a refined tool in its final form. The change would mean attrition, disorientation, loss of meaning and balance. The Sword might break under the pressure.

So, is she stuck and in need of help, dwelling in meaningless or meaningful duality? Is she refusing to compromise and remove the blindfold, to see the truth and error of her ways? Or is she actually in control, receding from worldly pain and unwanted responsibilities as if saying “leave me out of it?”

Zen Buddhist monks talked about “the sword that gives life and the sword that takes it away.” But how could a sword give life? When someone comes bearing questions, equivocal intellectual interpretations, and conceptual arguments, asking for advice or causing trouble, the adept must know when to help and when to put them in their place and drive them off.

The Sword cuts but cannot cut itself. In this way, the mind thinks but the trouble starts when it becomes the object of its own thinking. One is divided right in two, complications arise from speculating on the unseen and rationalizing the unattainable, and reality is lost between these reflections. Thus, it has been said: “it is like a dumb man who had a dream; he knows about it but cannot tell it.”

What does the Two of Swords Tarot Card mean?

Depending on the context and the surrounding cards, the Two of Swords can be interpreted in many different ways.

The Two of Swords is an ambiguous card that transmits a sense of inner peace but also the strenuous effort to resolve a dilemma. It calls for the balancing force of a clear analytical mind. A decision must be made; the two choices, leading in opposite directions, might be causing confusion and emotional tension.

On a surface level, this card conveys a simple message: if we let no one close, nothing can harm us — what we do not see isn’t a threat. But that could just as well amount to avoidance, for better or for worse, an escape to a quiet place of tranquility and balance.

When you see this card in a reading, pull two more cards on either side to clarify the nature of the dilemma. The seeker must decide on an important matter and the choices are very clear; it’s just that they either do not want to face the problem right now, they cannot see the bigger picture yet, or they have distanced themselves in order to reach an impartial conclusion.

More likely than not, this deadlock has been triggered by a questionable external influence or a third party with unclear motives, hence the confusion and the need to keep a balance in relationships. The individual is weighing their choices and words carefully and may have already made up their mind. However, they are delaying the decision’s announcement in consideration of the consequences or simply out of doubt.

The Two of Swords is a card of calm and silent power, albeit slightly out of focus. The lady in white knows exactly what is going on and what the right move is, but complications arise due to undisclosed information, emotional involvement, and the opinions of other people.

As the second card of the suit, this also represents the accumulation of data, thoughtful preparations for the next step, and being receptive to one’s intuitive faculties.

What does the Two of Swords Reversed mean?

The reversed Two of Swords implies indecision, indifference, confusion, and misleading information. Plans are delayed and the peace has been disturbed. The seeker’s affairs will remain at a standstill until the truth comes out, a decision has been made on their part, or they remove themselves from the matter at hand.

This might be a case of false appearances; the reading’s subject might have been deceived or deliberately kept in the dark, resulting in the infamous analysis paralysis. Someone close to them might have been attacking their character and through dishonesty, trickery, and gaslighting has led them to doubt themselves and question their own reality.

See how a triangle is already forming, should we reverse the card. Unless a firm decision resolves the issue immediately, this will only lead to the Three of Swords’ pain, heartbreak, and grief.

Finally, the seeker might be overwhelmed by extraneous information or is simply indifferent to what’s going on around them. Sometimes it’s for the best to refuse to have an opinion and involve ourselves in the drama of others. Neither agree nor disagree; calm, easy, and unconcerned, let it go and let the hypocrites settle their own mess.

Is the Two of Swords Tarot Card a Yes or No?

The Two of Swords does not give a definitive Yes, No, or Maybe answer because it is a matter of personal choice and free will. Pull two more cards on either side for your question and consider the consequences: if Yes, the outcome will be card A; if No, then card B is your best bet.

As chance might have it, the moment you see the Two of Swords you already know what the correct answer is. After all, the choice is yours and yours alone. Perhaps you need some time to think about this but the intuitive aspect of this card suggests that deep inside you have the answer; now you must convince yourself it’s the right choice to make.

The reversed Two of Swords is a calm and firm “Νο.” This might refer to a stalemate or a situation that left you wondering about your options. Make no mistake, if something seems fishy, it probably is, and should trouble you no more.

Is there a better way to avoid conflict and put an end to indecision and confusion than to stay out of it? Probably not. Whatever the concern might be, this is not your fight! 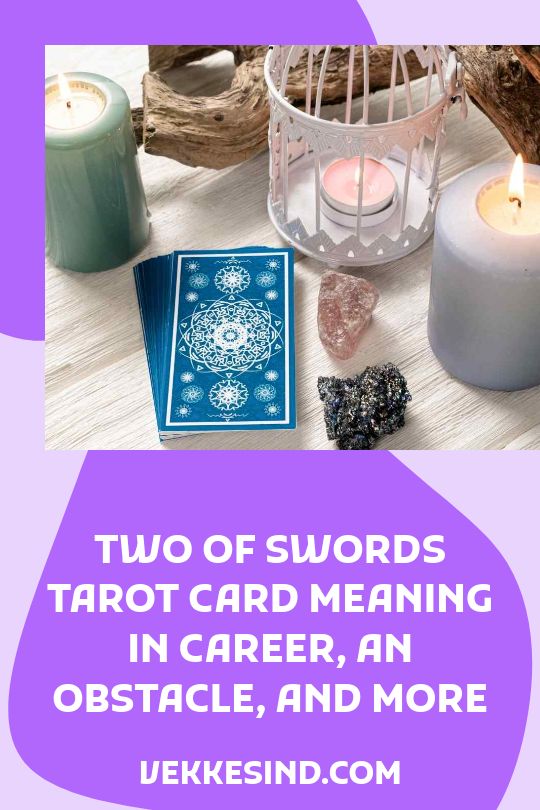