The Two of Swords is about difficult decisions, detachment, weighing pros and cons, and finding a temporary yet vital balance in relationships and everyday life in general. Let’s see what the card means in terms of romance, feelings, and friendships!

What does the Two of Swords Tarot card mean in Love?

The Two of Swords in a love reading usually means “make up your mind.” There is tension underneath the surface. Somebody is not being completely honest and agreeable, and the relationship has reached a roadblock. Avoidance and balance are the keywords here.

No one should have to devise a pros and cons list for their partner. If it has come to this, chances are your love life is not exactly what you had imagined. Swords don’t do well in matters of the heart and the card confirms that things are about to get too complicated. In this case maybe you refuse to see the truth in front of your eyes, or you are over-protective of your emotional state because something feels off.

Sooner or later you will have to make an important decision, that’s the catch of the Two of Swords. You need to clear up your mind and think about what’s best for you. The card suggests that you or your partner might have been dishonest and avoiding each other. The relationship is not at all balanced and is starting to feel like a burden.

Sometimes even soulmates have to walk in opposite directions for a while until balance and harmony have been restored.

Ask for advice from a friend, someone who’s not emotionally involved in this. Talking about it will certainly help. And if you’re single, maybe you’re not feeling ready yet. Love is a choice after all, and there’s nothing wrong in waiting for the right person to show up.

What does the Two of Swords Reversed mean in Love?

When reversed, the Two of Swords recommends making a decision of vital importance soon, or it will be made for you. It suggests that you might be confused, disinterested, or don’t know how to keep going. Worst case scenario, the card might point to falsehood, gaslighting, and doubts in a romantic relationship.

If the Two of Swords’ message is “make up your mind,” when reversed it is twice as serious. This is definitely bad news for romantic affairs, from cold feet and indecision to hypocrisy and mind-games. Maybe someone’s not really interested anymore.

Draw a few more cards to clarify what is causing tension and confusion. Is their behaviour questionable, if not suspicious? Do they declare to like you, but act lukewarm and then disappear or invalidate your feelings?

The card is a warning: if you get attached, it will only get worse. The Three of Swords up next is quite self-explanatory.

Some people want to have the upper hand in their relationships by keeping score and engaging in quid-pro-quo games. And because they like to win, their partner is left with no space to be themselves. They have no capacity or desire to see from the other’s perspective and walk a mile in their shoes.

It sounds bleak and pessimistic, but no one should have to endure this. It’s not even about character, whether a person is good or bad; it’s about compatibility, respect, and accord.

What does the Two of Swords Tarot card mean in Friendship?

In a friendship reading, the Two of Swords indicates a difference of opinions and moods. Communication is limited to the secondary and someone is stuck in their old ways, lagging behind. You are called to settle a disagreement that might not interest you at all, and you should stay out of it.

Most relationships eventually deteriorate, and people change. It’s not necessary to be liked by and agree with everyone all of the time. Why, that would be terribly boring! By now, we all know the benefits of social distancing. The Two of Swords is a solitary card that stresses the importance of finding your inner balance and yourself until communication is once again effortless and natural.

Maybe there’s no one to blame here (and it is wise indeed to not assign blame in such matters) but if you feel like you have to defend yourself, your mindset, and your choices to your acquaintances, then redefining who you consider to be your friend is advisable.

The same goes if for some reason it falls on you to assume the role of the peacemaker, the messenger, or the initiator when you have no desire to do so.

What does the Two of Swords Reversed mean in Friendship?

The reversed Two of Swords amplifies tension and confusion. This is far from what you might need right now, it is like asking for help and getting knives thrown at you on the pretense of tough love. The card’s message is pretty clear: you can listen to what they say if you want, but do not accept a single word.

In reading about one’s social life, the Two of Swords in reverse is the definition of “walking on eggshells”. Freedom of speech is the basis of any human interaction, and in the shadow of this card we see a forced silence on one side, and words like sharpened steel on the other. It’s about double standards, hierarchy, psychological projection, and lack of empathy.

Let us think of it this way without elaborating further: it makes no difference if one man is drowning in a pond and another in the ocean. Both need help. Friends are meant to each other; all of the above is a failure to communicate and a “me against the others” point of view.

The Two of Swords Tarot card as Feelings

Concerning feelings, the Two of Swords is murky at best, an upsetting emptiness, or perhaps a conflict of different emotions that cancel each other out. However, the card is saying “keep calm no matter what, this won’t be your first fight.” A quiet mind with pure thoughts won’t let the heart be swayed.

There are two ways to address this: one is basically the emotional dead-end of detachment and neutral formalities, a rather cold place to be. The other is acknowledging the existence of feelings, the effect they have on everyone, as well as their fleeting and unpredictable nature, while still being able to act above them and stay level-headed, civilized, and rational.

Quite different from its equivalent, the Two of Cups, where we see a genuine connection and mutual sympathy elevated to an almost spiritual level, the Two of Swords is a gentle reminder that, in the beginning and the end, everyone is alone and blind to the twists and turns of life.

Something that feels normal and cool for one person might be alarming for another, and in the same fashion one man’s plight seems like a piece of cake to somebody else. The Swords at least point to objectivity and reason; if we close our eyes, everything’s just a whisper in the wind.

Despite being so similar, no two people see the exact same world, and what we feel individually can only approximately relate to the experience and mindset of others. That’s why in the defensive attitude of the confused and the self-centered we can often trace the all-too-millennial “nobody understands what I’m going through.” What a tragedy!

The Two of Swords Reversed as Feelings

The Two of Swords in reverse describes a hazy, uncomfortable, and bitter emotional state. Perhaps the seeker is feeling like everyone’s out to get them. Confused and agitated, stuck in their own head, they can’t properly express their feelings of unease or simply don’t care.

Notice how the woman’s hands are crossed in front of her chest, as if carrying a burden or having difficulty breathing. Better get some fresh air and not dwell on this one; when you see the Two of Swords reversed, the roots of the issue are likely indifference, confusion, and discomfort. Look elsewhere for answers. What you are feeling and thinking right now is only a temporary misinterpretation of the facts and should not be trusted.

Despite its subtlety, the Two of Swords isn’t that charming in regards to first impressions. The person in question thinks you are okay but seem awkward, distant, and set in your ways. Though your presence might be calming, they believe you are incompatible and have too little in common to see eye to eye.

When someone sees you like this particular card, they think your mind is far, far away. To them, you are unavailable, difficult, or aloof, though your calm composure seems somewhat intriguing and even promising. Bottom line, they’re not very interested, but it’s up to you to change their mind.

The reversed Two of Swords describes indifference at best, and a confused victim at worst. So, there are two possibilities: the person either thinks you are not very interesting, or that you’re an easy target, too eager to believe anything you hear.

On the other hand, you might have created the impression of someone who can’t take a joke and gets easily duped and offended, too serious and touchy for your own good. This makes communication strenuous and one-sided; you both cannot or don’t want to see from the other’s perspective. 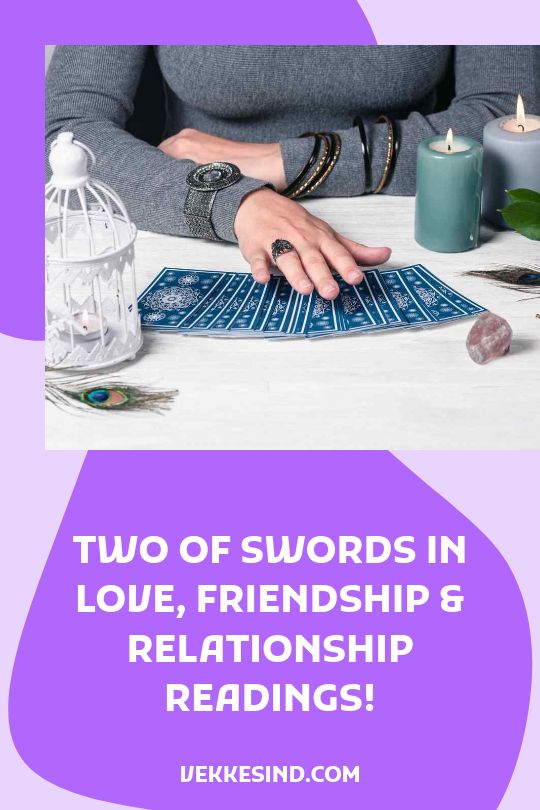