Heartache, absence, and grief: the Three of Swords speaks for itself.

What does the Three of Swords Tarot Card mean in Love?

When it shows up in a love reading, the Three of Swords is a sign of heartbreak and disappointment. It is the surfacing of painful truth, the cold void after a break-up. The card might also indicate a love triangle, incompatibility, or a passionate affair that is unfortunately doomed to fail.

If Romeo and Juliet had consulted a Tarot reader, their story might have a different ending! No other card screams “heartbreak” like the Three of Swords. For a love reading, it means there’s no possible way to make it work, so you’d better try to save what you can before the relationship turns into a full-blown tragedy. Love isn’t easy, even some fairy tales have gotten that right.

The card might come as a shock, a sudden and painful realization that’s hard to accept, or you might have seen it coming from miles away. It might denote infidelity or serious and irreversible problems in communication. Either way, the result is the same: somebody is deeply hurt and there’s no consoling them. Unrequited love and blind passion make men do dreadful and silly things; the road to recovery will be long and difficult.

Altogether, the Three of Swords is so honest it leaves no room for doubt. It usually appears when it’s too late to mend a relationship, when a lie has been exposed, or when it’s obvious that two people can’t be together anymore. You thought they were the one but the sweet illusion has faded.

After the rosy filters of love and enthusiasm disappear, the clouds of sorrow gather above, and should you ask anyone whose heart’s been broken they’ll tell you that when it rains it pours, and there’s nothing to say that could make a difference.

What does the Three of Swords Reversed mean in Love?

The reversed Three of Swords means it’s time for you to heal, let it go, and move on. You might have been processing a breakup or feeling bad after a fight. Better not dwell in sadness nor push emotions away. Healing won’t be easy but you can do it. The key is forgiveness.

The Three of Swords is about getting over a traumatizing breakup. When someone is unable to find true love, it’s usually because they do not know how to love themselves first. Perhaps they think they do not deserve it or they have simply forgotten.

Any problems you might be having in your relationship can be dealt with but only if you honestly express your feelings and show kindness and understanding.

Today people get angry and upset over lost love, but they’re too erratic and impatient to build a strong connection. Time brings wisdom, patience, and a tolerance for pain. After a certain point, it’s much easier to love and forgive others. But do they all deserve it?

What does the Three of Swords Tarot Card mean in Friendship?

For a friendship reading, the Three of Swords points to a falling out between friends, but there are more possible interpretations. It might be a sign of confused feelings, missing friends you haven’t seen for a long time or feeling abandoned and hurt.

The Swords are a bad sign for relationships of any kind.

Life is hard, people change, and relationships deteriorate. Think about it: if they were true friends, would they do that to you? Probably not. When someone cares, it shows. When they don’t, you cannot change their mind and you shouldn’t have to if that’s how they want it.

Eventually, all this will go away and change, it won’t matter anymore. Just don’t try to force intimacy when it doesn’t happen naturally and learn to take care of yourself.

What does the Three of Swords Reversed mean in Friendship?

In case someone has wronged you, it’s time to bury the hatchet and try to keep negativity out of your relationships. Perhaps it’s partly you who created the problem and a life lesson is in order: forgiveness is not always guaranteed.

Did you say something they didn’t want to hear? If you offended them, show them you’re sorry. Good friends are not to be taken for granted and that’s a lesson one cannot learn too early.

However, if you believe it’s their fault, how does this actually help you? Better assume responsibility for your words and actions and let them go on their ways. People don’t like to be reminded of their constant errors and that’s why you most certainly won’t see a large crowd around honest people.

The Three of Swords Tarot Card as Feelings

The Three of Swords denotes feelings of sorrow and profound sadness. It is grief, melancholy, and anguish. Sometimes the pain is so much it can lead to psychosomatic symptoms. All the more reason why one must face it head-on.

You’ve been deeply hurt and left out in the cold, you’ll need time to recover. Nobody knows what you’ve been through. But when a person has matured enough, dwelling in sorrow and doing nothing about it becomes awfully boring and dull.

People often build a nest in transcendental lofty sadness. They’re so confused and out of touch, they think it’s never going to end and get comfortable with it. Offering only sorrow to the world, it pays them back threefold. The bubble of misery feels warm, but it is freezing cold. Maybe they’ve grown to like the pain, maybe it’s all they know.

Scratching the same wound over and over again… The Three of Swords is dark and heavy. There’s no shelter to be found, nobody understands and nobody cares. But if you’re sad, why on earth would you go about and make other sad people even sadder? It is like trying to save a drowning man with a bucket of cold water.

The Three of Swords Reversed as Feelings

The reversed Three of Swords is about forgiveness, pain release, and healing. The feelings of sadness and sorrow are there, but you have begun to acknowledge them for what they are, there’s a silver lining. Still, it’s difficult to move on. You have to look at this as an outsider.

Time has passed but negative emotions tend to stick around. You wonder, “Why did this happen? Why me?” Well, it’s not about you, not at all. Bad things happen to everyone!

Are you going to give up? No, you will embrace what happened, like everyone eventually does. Let the pain do its worst. Life’s too short to be sad all the time.

Finally, don’t take anyone’s words or bad manners to heart. Who goes out of his way to criticize people and hurt their feelings, even if it’s justified? A bully or a confused person. They must be in great pain themselves to take it out on others.

When somebody sees you like the Three of Swords, they might believe you are a sad and broken man, or you may have done something that hurt them deeply. Either way, they don’t necessarily have something against you, but perhaps it’s best not to talk about it.

The person in question might be missing the happy “you” and it hurts them to see you in pain. The first impression you made was not quite realistic and they’re starting to see the real you. It’s just that they’d rather see you smile. A positive mental attitude is unstoppable and extremely attractive. Sadness, on the other hand, can’t be concealed that easily. It slips out of every word, it shows in the eye.

Worst case scenario, they see you as the man who broke their heart. They might say nasty things about you. That’s pride, confusion, and hurt feelings talking. They’ll need some time to get over it, so don’t interfere unless you can actually help ease the pain.

When reversed, the Three of Swords means that the person in question thinks you’re something of an outsider, but they sympathize with you and would like to help you. Alternatively, in case there is history between the two of you, they are willing to forgive you and let it go.

In reverse, this card emphasizes sympathy and forgiveness over a grudge. This person likes you and is ready to move on if you feel the same way, it’s all water under the bridge. They see in you a sensitive introvert but also a strong human being who can be optimistic even when under pressure. 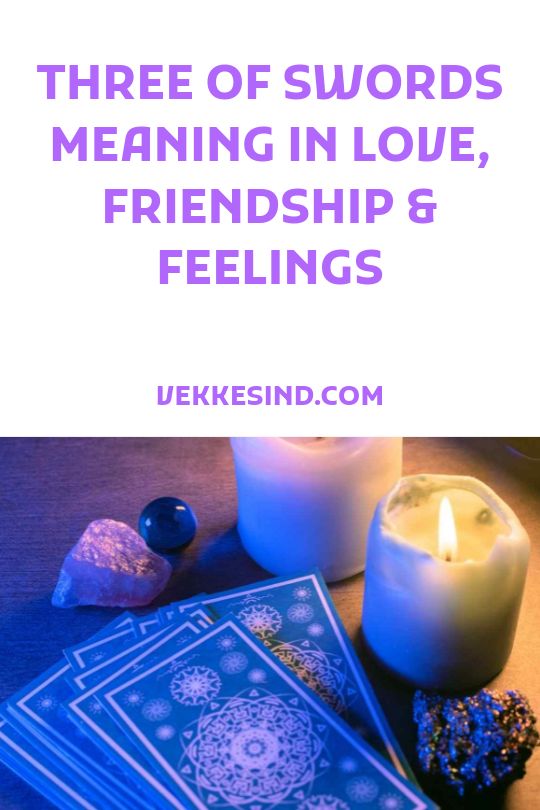