The Ace of Swords is the axis of intellectual might, a new ground-breaking idea, and the origin of the element of Air. In the image of the Rider-Waite card, a hand emerges from a cloud in the sky over a mountain range and grasps a sword that emanates sparks of energy, piercing through a golden crown adorned with rubies.

The essential values of the suit of Swords are perception and the intellect. Evidently, this particular Ace is a formidable weapon, meant to cut through illusions and complexities.

In this article, we plunge right into the basic meanings and occult symbolism of the Ace of Swords and clarify the general role it can play in a Tarot reading.

In the beginning, was the Word, says the Bible—because the written and spoken word, hallmarks of human intelligence, are the tools that once established tradition and organized spirituality, differentiating man from beast and keeping order within society.

A sharpened blade, strong and flexible, makes for a worthy symbol of human ingenuity and cunning but also denotes the perilous and double-edged nature of an evil, confused, or inexperienced mind. At the hands of a wise master, the sword can dance through the wind, destroying falsehood and resolving disputes or complex problems faster than lightning.

Look closely: the hand appears out of thin air on the card’s left side, while the sword’s point rests in the ellipse of the crown above. We start from the ethereal realm of spirit and past experiences to reach truth and awareness. But the Ace of Swords demonstrates the initial idea. Devotion, study, and constant practice are required to master the blade, it is no easy task; furthermore, this is an object that must be crafted, stressing the importance of invention, utility, and spadework!

Two branches with foliage are attached to the crown, one from a palm tree and the other from mistletoe. Both plants show remarkable resilience; they can survive and thrive in extreme climates. The palm branch symbolizes victory, peace, and eternal life, while the mistletoe represents vivacity and good luck. And even though its berries are toxic, it was deemed sacred by the Druids of ancient times, who used it to brew healing potions.

Over the challenging mountains of abstract thought and unchangeable objective truths, the intellect’s needle points to the sky, a new and elevated point of view, and into the receptive crown, aiming to attain realization, authority, clarity, and power. However, every card in the Tarot cycle needs to be combined with another element. The intellect needs intuition or it can never rise above cold reality’s rocky ravines and dispel the engulfing mist of illusion.

A firm and steady grip, a strategic inventive mind, eyes quick to observe and spot the truth. The way of the spiritual blade goes through relentless practice and unbreakable discipline; few truly attain it and even fewer know its vital purpose. Let us heed the words of Yagyū Munenori, master swordsman of the East: Conquering evil, not the opponent, is the essence of swordsmanship.

If we want to take the Ace of Sword’s symbolism one step further and toward the modern era, while still entertaining the concept that swords signify communication, we must admit the Ace’s overall similarity to an antenna; the sparks of light are the airwaves, the hand is the transmitter, the sword is the message, and the crown is the receptor.

Likewise, it can be compared to the functions of the nervous system, and the way in which neurons respond to stimuli and transfer that input to and from the brain.

What does the Ace of Swords Tarot Card mean?

When upright, the Ace of Swords is a magnificent card that brings swift energy to a reading.

The Ace of Swords stands for victories of the mind, new ideas, and intellectual breakthroughs. It means you can see things clearly, reach decisions in a flash and communicate your thoughts succinctly, unaffected by emotions. Like all Aces, it shows a potential that must be actively worked on to yield long-term results.

In a broad sense, this card signifies the ever-wandering mind, but also its power to concentrate and hold onto a single thought with the purpose of transcending its own restless nature: meditation. As the first of its suit, it may denote a new project that’s going to need lots of thinking, the beginning of communication, new information, etc.

The Sword cuts through confusion, exposing lies and deceitful thoughts. So, when you see this card, know that you are standing in the light of truth. Whatever the situation might be, do not hesitate for a moment; your decisions will be just and swift, you are thinking with clarity and from a great vantage point. Take notes of your good ideas, lest you forget, seek ways to develop them further from theory to practice, and stick to the facts.

Opening up new ways of thinking, the Ace of Swords will likely appear just in time to accompany a small first victory, when you are on the verge of a breakthrough. The painful thoughts and feelings that dominate the suit’s other cards (like the Ten where mental strain piles up) are conquered by the simplicity and brute force of the Ace.

Bear in mind that the Ace of Swords, which serves the crown, illustrates a disposition above ordinary things that comes with great power, capable of both creation and destruction. Let the one whose hand commands it have the courage to place responsibility overpower, and the will to let obsolete and false concepts be destroyed in the process. Necessary as it may be in the balance of the four elements, the sword is but a crude weapon made for war, keeping enemies at bay, and opening a passage through complexities.

One must always analyze and criticize their own convoluted thoughts and ideas, it is elementary. Yet one should also remember not to overextend and put too much faith in cold reasoning, not to brutally attack ideas, for the crown keeps the sword in check and can never be divided by it. Set your emotions aside for a while but do not forget your humanity.

In conclusion, the Ace of Swords is a great card if one knows how to handle its energy properly, conveying the mind’s power, the conception of an idea, and a new beginning.

What does the Ace of Swords Reversed mean?

In reverse, the Ace of Swords points right back at you. Depending on the surrounding cards, interpretations may vary. Is someone else brandishing their sword with you as its target? Are you perhaps not thinking straight or having second thoughts about your fresh ideas?

The reversed Ace of Swords lacks the elegance and clarity of its upright version. Cold rationalism leaves no place for imagination to grow. New ideas are under attack or going through meticulous examination, while old convictions are exaggerated, leading to confusion, cruelty, and emotional mistakes.

Here, the Ace’s power might be spent for all the wrong reasons. Without proper training and meditation, the sword becomes unpredictable, dangerous. The card denotes that you are close to a breakthrough, but your ideas are not ready to materialize. You need to think this through with a clear mind; truth, research, and objectivity above zeal and haste.

Remember Excalibur’s fable? The magical sword in stone that no one except the rightful king could claim for his own. A new radical idea can sometimes be thus; no matter how hard we try, our attempts to channel the mind’s energy into something practical prove futile.

In case the sword appears to be handled by somebody else, best be careful whom you are letting get close to you and what you reveal to them. They might not be as friendly or honest as they seem at first and speak hurtful words, eager to do battle. For more insight, refer to this article where we explain the Ace of Swords’ meaning in conflicts.

Finally, this Ace might denote a loose grip on reality, confused thoughts taken to the extreme and affecting your feelings. Empty concepts and ideologies are falsely magnified, interwoven, and perplexed instead of being broken down and simplified.

Truth invariably ushers in pain, unless we look at it with sober indifference. The dangerous mind, always on the move, is overwhelmed and strikes back with anger when it realizes its understanding can never exceed certain limits. Such sorrows lie in wait for those who vainly take pride in their intelligence, lacking the devotion to a simpler and natural way of life.

A kingless crown, a sword that turns against its master; an awakened awareness that, nonetheless, cannot avoid the misery going hand-in-hand with both profound knowledge and the total absence of it. An intellect that, keen and swift as it may be, lacks the skill, compassion, and sensitivity.

Here’s a tactful reminder: the Magician’s dagger is no mere toy, and it must sometimes be held with its point downwards in order to avoid accidental harm and unwanted difficulties. A healthy mind can defend itself against dangerous ideas and devious schemes. And one must know, above all else, when to speak and when to think in deep silence.

Is the Ace of Swords Tarot Card a Yes or No?

The Ace of Swords, a card of victories and clarity, is an unmistakable Yes. However, one should always consider the double-edged nature of such a decision/result because the sword always divides; you might have to choose one thing over another, and, either way, it is an influence that will be over soon.

This card is a swift Yes, no questions asked! But keep in mind that the swords are very fast; you will likely get what you want, or the matter will resolve the way you think it will, but this won’t have a lasting effect. A fleeting triumph at the very least!

The reversed Ace of Swords is still a Yes, but in this case, you might have to fight for it and defend your position with everything you’ve got.

In reverse, the card is still favorable, although it doesn’t make things easier for you. Difficulties or opposition will likely arise, so better get ready and try to find the simplest, smartest and best possible solution for the problem at hand. 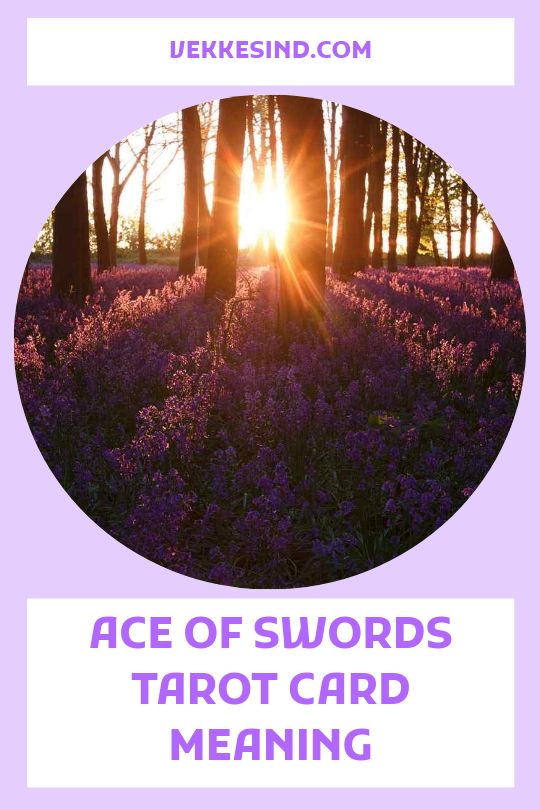