If you have a crush on an Aquarius man and are hoping to win his love, you need to understand what his zodiac sign looks for in a partner.

An Aquarius man seeks a woman who is independent, assertive, and sincere. His ideal girl is gorgeous, hilarious, and unlike any woman he has ever met. He likes a lady who is more rational than emotional, and he wants a girl who can be both his lover and his best friend.

If you are looking for a more in-depth plan (and training) to have your Aquarius man swoon over you, then check out zodiac dating expert and “Sextrologist” Anna Kovach’s book: Aquarius Man Secrets.

Anna’s book is really insightful. Check it out (after you’ve read my article)!

10 Characteristics an Aquarius Man Loves in a Woman

Aquarius is one of the most independent signs of the zodiac, and an Aquarius man cherishes his individuality and freedom. He doesn’t want to be with a clingy, desperate partner.

He’s attracted to a woman who can take care of herself. He wants to be with someone who wants him but doesn’t need him. His ideal lady should have a career, friends, and hobbies of her own and be a self-possessed individual.

Even an Aquarius man in love needs plenty of alone time, and if he’s with a woman who likes to spend all of their free time together, he will feel trapped and smothered.

He is a social and outgoing type of guy, but he also likes quiet time alone to relax, or to hang out with his friends without his partner occasionally.

While he is happy to share a lot of time with the woman he adores, sometimes an Aquarius guy wants to take a trip or spend an evening by himself, and his ideal woman will understand his independent nature.

In astrology, Aquarius is considered the philosopher of the zodiac. Aquarians are very intellectual and they think in unconventional ways, coming up with ideas that most others couldn’t conceptualize.

An Aquarius man is very logical and practical, but he also likes to explore abstract ideas. He loves long, deep discussions about new scientific breakthroughs and conspiracy theories. He also likes learning about the supernatural, paranormal, and metaphysical.

An Aquarius guy wants an intelligent partner who can carry a mentally stimulating conversation on the subjects that interest him. He’s looking for a partner who can also be his best friend and will stay up all night talking to him.

If you want to impress an Aquarius guy, don’t hide your intelligence or act more naive than you are. Talk to him about the books you’ve been reading lately, what’s going on in the news, or the last documentary you watched.

He adores a smart lady who is always seeking to learn new skills, so try inviting him to some type of class, like an ice skating lesson or a cooking class.

Before we go into more characteristics that an Aquarius man loves in a woman, it’s probably a good time to check how compatible you are with your Aquarius man.

Anna Kovach created a fun quiz to determine how compatible you are with your Aquarius man. There are just 9 easy questions… Start Anna’s Compatibility Quiz.

Besides being the philosopher of the zodiac, Aquarius is also the rebel in astrology. Aquarians tend to think a bit differently than others, and they are the first ones to challenge authority or go against the usual way of doing things.

An Aquarius man wants to be with the type of person who has strong convictions and sticks up for herself and others, and he is attracted to a bad girl with a rebellious streak.

He can be a bit argumentative because he’s so contrary, and he enjoys debating controversial issues to try to see them from all perspectives. He wants a woman who will challenge him and help him see different points of view.

He’s looking for a girl who thinks for herself instead of just going along mindlessly with what everyone else is doing, and he needs someone who is willing to live an unconventional lifestyle or at least embrace nontraditional ways of thinking.

Aquarius is one of the most honest and direct zodiac signs, to the point where an Aquarius man’s unfiltered truthfulness gets him into trouble at times.

He says whatever is on his mind and is very upfront, but because he has such an unusual way of thinking, others who don’t know him well often assume he’s joking or being sarcastic when he’s being sincere.

Although he tries to be kind and respectful, sometimes he comes across as careless or impolite because he never sugarcoats his words or holds back his opinions.

An Aquarius guy thinks everyone else should be as truthful and direct as he is, so he hates secretive, manipulative people. He needs an honest, genuine woman because he can’t let his guard down and open up emotionally to someone he can’t trust.

Aquarius is a progressive and innovative sign, so an Aquarius guy embraces change and spontaneity.

He will follow a rigid schedule when necessary, but he has to break free of the dreary daily routine once in a while and do something impulsive.

If you’re going out to dinner with an Aquarius guy, he might suddenly suggest going to a bar or a restaurant in another city. He wants to do things like go on spontaneous road trips, and he needs a partner who will join him on impulsive adventures.

An Aquarius guy can be a bit dreamy, and sometimes he needs a partner who can keep him grounded. But being with someone exciting and spontaneous is ultimately more important to him than being with a stable, predictable girl.

Every zodiac sign is unique, but Aquarius might be the quirkiest of them all. Aquarius is a very eccentric star sign, so an Aquarius man is unlike anyone else you have ever met, even other Aquarians.

An Aquarius guy is drawn to eccentric, unusual people. He is attracted to outliers and underdogs, and he likes a woman who stands out from the crowd.

If you have a special or unique trait, like a cool scar or a bizarre talent, let your Aquarius man see it. He will be more attracted to you if you stand out and show off what makes you different.

Check out “Aquarius Man Secrets” for everything you ever wanted to know about your Aquarius man… (but were afraid to ask!)

Not only does an Aquarius man want a quirky girl, but he also wants her to be unafraid of showing the world how special she is.

An Aquarius man thinks confidence is extremely sexy, and he doesn’t want to be with an insecure, self-conscious woman.

Giving lots of compliments doesn’t come naturally to an Aquarius guy because he prefers to express his love in other ways. He should be with someone confident who doesn’t need words of affirmation as a love language.

He also needs a confident lady because he likes to spend so much time alone. He needs a woman confident enough to know that when he needs time alone it doesn’t mean he’s mad at her or that the relationship is in danger.

He is attracted to the type of woman who can enter any social situation and start a conversation with ease. He finds self-assuredness hot, so his perfect woman must possess this quality.

An Aquarius guy has an unusual, somewhat morbid sense of humor, and he deserves to be with a woman who can appreciate his funny side.

Aquarians are prone to depression and anxiety, so an Aquarius man needs a cheerful, upbeat woman with a good sense of humor to help him feel better when he’s down.

The right girl for an Aquarius man likes to crack jokes and doesn’t take life too seriously. He is looking for a partner who can be both his lover and best friend, so sharing a sense of humor is important to him.

An Aquarius man isn’t shallow in almost every other way, but appearance is important to him when it comes to a partner.

He has to have an instant attraction to a woman to be interested in her romantically, and he likes showing off a beautiful, sexy woman on his arm.

An Aquarius guy takes care of himself, and although he may have an eccentric and quirky sense of style, he cleans up nicely and knows how to look handsome.

He wants a good-looking woman that he is physically attracted to right away. Without this physical connection, it’s almost impossible for his love to grow.

Some astrological signs are more sentimental than others, and Aquarius is one of the least emotional signs of the zodiac.

An Aquarius man thinks with his head, not his heart. He uses facts and data to make decisions rather than relying on intuition and gut instincts.

He has a hard time opening up emotionally to others because he hates acknowledging and expressing uncomfortable feelings like anger, hurt, and sadness.

He shouldn’t be with a sensitive, moody woman who gets pouty and sulky when she’s upset. He wants a woman who is as logical and rational as he is, and she should be able to put her feelings aside when necessary.

An Aquarius man loathes big, dramatic displays of emotion, so he gets turned off when a woman throws fits or bursts into tears frequently.

Quiz: How compatible are you and your Aquarius man?

As I mentioned before, Anna Kovach, can provide you with more in-depth training and coaching, check out Aquarius Man Secrets, click here. For methods to have your Aquarius man thinking about and desiring you all the time.

What an Aquarius man likes in a woman, final thoughts…

An Aquarius guy is highly independent, and he’s very picky when it comes to choosing a partner. He would rather be single than settle for someone who doesn’t fulfill his dreams.

An Aquarius man wants a hilarious, intelligent woman with a rebellious streak. She should be self-assured and attractive, and she needs an unconventional, quirky personality. He is looking for a woman who makes him laugh and will be playful with him like a best friend.

If you have all of the special traits he’s looking for in a partner, then you might be the perfect match for an Aquarius man. 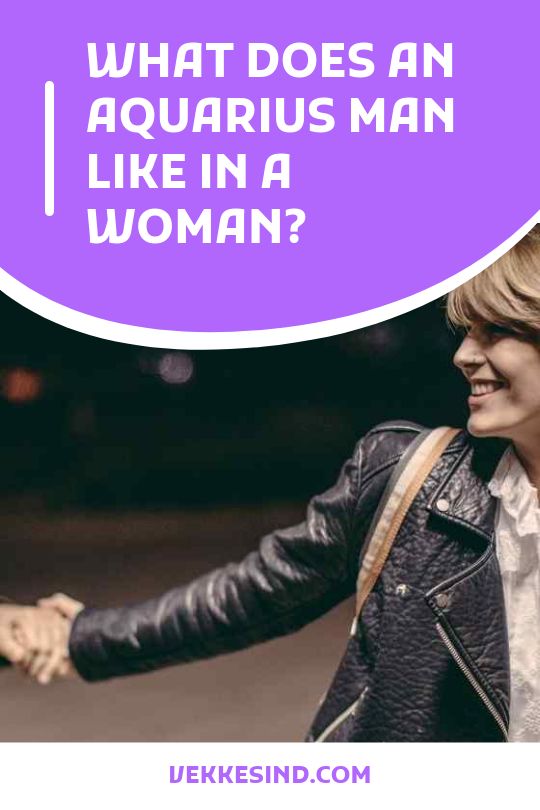