Being dumped by an Aquarius man or anyone, in general, is heartbreaking and you might be wondering if he regrets it or not. You have a friend and a possible soulmate by your side one minute, and then you’re completely alone the next. To help you out, here are the ways you need to know on how to make an Aquarius man regret losing you.

To make an Aquarius man regret losing you, you must start working on improving yourself and show him your successes along the way. Do not contact your Aquarius man but you can use your social media to show off. Now that you are no longer together, go on dates even if they are just friendly ones.

Read further to know more about the subtle ways you can make your Aquarius man regret losing you.

That said, let’s delve into some of the reasons he may have left…

Reasons Why An Aquarius Man Left You

Aquarius men are rational, rebellious, and selfless by nature, but certain traits, such as rigidity, intolerance, and perceived lack of respect, can cause them to reject you. Other major triggers for an Aquarius man to break up with you include trying to control his independence, attempting to manipulate him, and being dishonest.

Those seeking a committed relationship in which partners spend all of their time together should look elsewhere and ignore an Aquarius man, as he is far too independent for such a relationship, not to mention that he would never give up his active social life for a relationship.

Most Aquarius men aren’t fully invested in their relationships, to begin with. That isn’t to say he won’t betray you but it simply means that he is probably not that interested in you from the start. When an Aquarius man ends a relationship, he will do so in a logical, impersonal, and emotionally detached manner.

If you betray or anger an Aquarius man, he will not be in a hurry to avenge himself. Even though Aquarius men do not typically hold grudges for long periods of time, if they are sufficiently enraged, they will remember any wrong done to them – and if you manage to press his buttons, he will show no reluctance in displaying his dark side.

People must understand that an Aquarius man does not enter into a relationship lightly, and if you hurt his feelings, you should expect some unexpected consequences. Aquarius men are extremely self-reliant, so once they have decided to end a relationship, they will not look back.

You are unlikely to hear from an Aquarius man again once he has left your life. However, because they are picky when it comes to relationships, he will have a difficult time finding love again.

Pushing him to forgive you and begging him to return to you is something you must not do. This type of behavior is frowned upon by Aquarius men, and you will most likely lose any chance of regaining his love and respect.

The best way to take back an Aquarius man is to simply let him go for the time being. Trying to hold on to an Aquarius man will only drive him further away. Worse, if you become hysterical and try to play the victim, you will only infuriate him.

5 Ways To Make An Aquarius Man Regret Losing You

If you want an Aquarius man to regret losing you, you have to let him lose you. Ultimately, you’re not attempting to give him space; rather, you’re attempting to completely separate yourself from him.

Since you don’t need an Aquarius man anymore, let him see what life is like without you. That’s the kind of behavior that’ll make him reconsider his decisions and you’ll let him know you’re no longer available by cutting him off and going no contact.

The silence may look like it does not bother an Aquarius man, but it does bother him. Aquarius men seek stability in their lives, so even if you’re not together right now, he is probably still wanting to talk to you on a regular basis.

Disrupting his communication routine is the best way to shake him up and make him regret losing you. For sure, he desperately wants to hear from you, but he doesn’t want to break down his ego to do so.

If your Aquarius man sees that you are doing so well, getting your life together, he will most likely regret losing someone like you. You may try therapy, yoga, meditation, or whatever you need if your Aquarius man thinks you’re an emotional wreck.

Apply for other jobs if work is holding you back and you could also pursue additional education. Whatever you do to pamper yourself will show the Aquarius man that you care about yourself and your image.

An Aquarius man wants to date up, not down, so prove to him that you’re the best of the best. Surround yourself with positivity if you also want to improve your mental health and overall your life without an Aquarius man.

Your positive lifestyle changes will please your picky Aquarius man and he’ll wonder why he left you in the first place if he sees you putting yourself first, making healthy choices, and living your best life.

Nothing is more appealing for an Aquarius man than a woman who is successful in her field and at the top of her game. An Aquarius man will pay attention to you if you make progress in anything related to material gain or improving your status.

You give the Aquarius man tangible evidence when you don’t just try but actually succeed. So, you must demonstrate your ability to succeed, not just your desire to succeed.

If you’re wondering how to fix things with an Aquarius man, the best thing you can do is approach the situation like a work problem. The same goes for one of the best ways to entice an Aquarius man to return is to achieve success, independence, and pursue your dreams.

When an Aquarius man sees you as stable, secure, and powerful, he will reconsider his decisions.

After a breakup, Aquarius men understand that you owe them nothing. Some people don’t realize they have something until they lose it or find it in the hands of someone else.

Your Aquarius man believes you will be unable to find anyone who can compare to him, but you can prove him wrong by dating other people. Make sure, however, that you’re not dating just to make him jealous, but because you wholeheartedly like the person.

If you want to get back together with your Aquarius man, don’t lead the new man you are dating on. There are a lot of men out there who are looking for casual flings, particularly on dating apps.

Don’t forget to share your progress on social media while you’re improving your life. Don’t boast, but be aware that you’re dealing with an Aquarius man that values quality, status, and success.

Post about your accomplishments, as well as the time and effort you put into them, to show that they are well-deserved. As more people notice you, your Aquarius man will become increasingly envious that you aren’t his anymore.

Your Aquarius man will be keeping tabs on your social media profiles for clues about what you’re up to because he’s too egoistic to simply ask. Show him that you can still be happy without him by posting as much as you can about your brighter and happier life without him.

Post pictures of you and your friends and the occasional cute selfie to show off all the cool things you’re up to without him.

To make an Aquarius ms regret losing you: 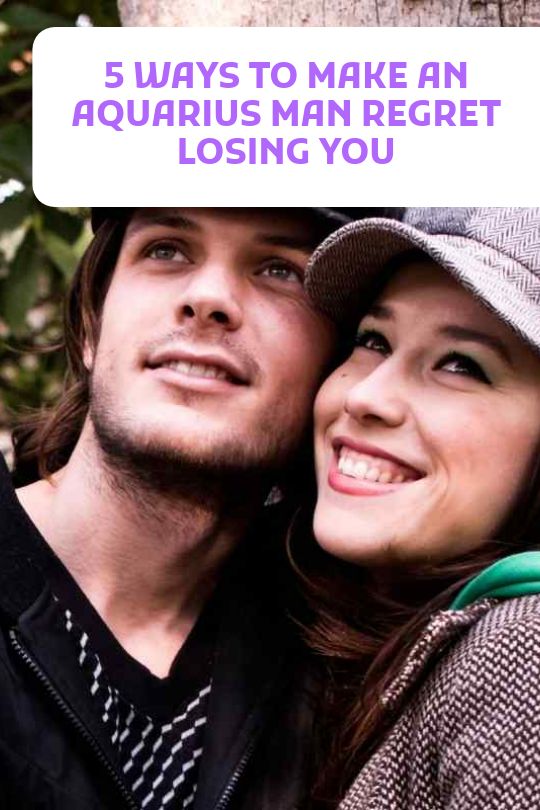