Synastry is a way of stacking two astrology charts together to see how they interact with each other. It is a common technique for assessing relationship compatibility in astrology.

What does synastry say about soulmates and twin flames? How do you sort through all the squares and conjunctions to see if you really are compatible? Read further to find the answers to your big questions about synastry charts.

Use the widget below to generate a synastry chart for yourself and your partner. The chart is free. This article will also give you some guidance on how to interpret your synastry chart.

Once you’ve created your synastry chart, you have the option to purchase a 20-page detailed interpretation report with diagrams and interpretations exploring the planetary aspects that you share with your partner. Press the “Get Report” button to purchase for $25. (Before doing that, you can scroll down to discover how to do some of the interpretation yourself.)

If you need a refresher on the planets and other celestial bodies included in an astrology chart, please see 7 Most Important Aspects of a Natal Chart.

To read the synastry chart, start going through the significant points one by one: the Sun, the Moon, the Moon’s nodes, and each planet. 7 Most Important Aspects of a Synastry Chart gives all the details on these.

For example, let’s look at the synastry between Prince Harry, Duke of Sussex, and his wife Meghan, Duchess of Sussex, who was formerly known as Meghan Markle. We will start with one of the two charts – Prince Harry, on the inner ring of the diagram – and go through it point by point.

Firstly, Prince Harry has his Sun in Virgo. The green line extending upward from it is a trine to his Moon in Taurus.

Meghan’s Chiron in Taurus is closely conjunct Prince Harry’s Moon and is therefore trine his Sun as well. The symbolism of the asteroid Chiron is based on the wounded healer archetype, so Prince Harry likely finds that this relationship brings up old wounds for him. A trine is generally a harmonious aspect, so perhaps he finds that the relationship heals those wounds.

Now that we have discussed Prince Harry’s Sun and Moon, let’s go through the planets in his chart in order. Mercury is the first planet, but Prince Harry’s Mercury near the beginning of Virgo is not making major aspects with Meghan’s chart.

Next, let’s look at Prince Harry’s Venus, which is in Libra. Meghan’s Pluto in Libra is very close to that. A conjunction between Venus and Pluto in synastry can be a powerful attraction.

What remains now are the outer planets: Jupiter, Saturn, Uranus, Neptune, and Pluto.

Jupiter can be associated with high status, and Meghan definitely gained status marrying into the royal family. With Prince Harry’s Jupiter square so much in her chart including her Saturn, however, the increase in status has probably not been all fun for Meghan.

Meanwhile, Prince Harry’s Saturn in Scorpio is square Meghan’s Sun in Leo. Saturn aspects in synastry can hold people together for the long haul even if they don’t enjoy every minute of it.

Prince Harry’s Uranus in Sagittarius is at least trine Meghan’s Sun and Mercury in Leo, so being with him may be liberating for her in some ways in spite of the pressures of royal life.

One could then go through all of the planets and points in Meghan’s chart in the same way to get her side of the story.

How Do I Know if I Have a Twin Flame Synastry Chart?

MindBodyGreen reports that twin flames are two halves of one soul who mirror each other’s strengths and weaknesses. This idea is not anything that astrology has the ability to prove or disprove.

What Are Synastry Aspects for Soulmates?

MindBodyGreen reports that a soul connection is when you and another person feel extraordinarily linked on a soul level. You can have connections of this sort with multiple people throughout your life, and these people are your soul mates. These connections may or may not have a sexual or romantic component.

The South Node is basically where you are coming from. It refers to things that come easily to you, although you may feel like you are in a rut or not growing when you focus on these things.

The North Node is where you are going, even if it involves things that are hard for you to learn.

If one person has a planet or luminary conjunct the other person’s North Node or South Node in synastry, these intense issues of life purpose can be triggered. That can definitely feel like a soul connection.

If the conjunction is around one person’s South Node, the relationship might be comfortable, but the person whose South Node is involved might feel held back by the relationship, like it is preventing them from growing somehow. There might also be a dynamic where one person feels that they owe the other person something.

If the conjunction is around one person’s North Node, this might be a challenging relationship especially for the person whose North Node is involved.

The relationship may be very important for their personal growth, but it is not a relationship where things can be taken for granted. Every little thing has to be hashed out the hard way.

What Are Synastry Aspects for a Significant Relationship?

The planet Saturn has a bad reputation for causing limitation and restriction. However, in some relationships, Saturn may be exactly what you want in synastry.

In a significant relationship, Saturn can be very valuable in synastry, as it holds people together. This is true whether the relationship is sexual, friendship, family, or business.

Commitment is a form of limitation that has a good reputation. If your synastry chart has one person’s Saturn aspecting the other person’s Sun, Moon, or Ascendant, you two are committed to staying together and working through the tough stuff.

Are Squares Bad in Synastry?

Squares in synastry show that there is a connection between two charts that has some tension.

Whether squares are bad in synastry depends in part on the planets involved. Some individuals are also better equipped than others to handle a relationship that has squares in synastry.

A square in synastry between aggressive Mars and restricting Saturn, or between Mars and underhanded Pluto, could result in control issues and manipulation. At worst, such a square could be expressed in physical violence.

A square in synastry between pleasure-loving Venus and expansive Jupiter, however, would not be as bad. The worst case scenario there would be that you and your partner have trouble staying within your budget, or that you two party so hard together that you neglect your responsibilities.

Whether squares are bad in synastry also depends on the people involved. If you have a lot of trines and sextiles in your natal chart, you might be a person who is drawn to a calm and peaceful environment.

You like things to be easy, so you would probably want to get out of a relationship where you and the other person had a lot of squares in synastry.

If you have a lot of squares and oppositions in your natal chart, though, you need some excitement in your life to be happy. You would probably be bored out of your mind in a calm relationship that had no squares or oppositions in synastry.

In a sexual relationship, a square in synastry between one person’s Venus and the other person’s Mars might increase the physical passion, so some might find that square desirable.

How Do I Know if My Birth Chart Is Compatible With Another Person’s Chart?

How do you sum all this up and determine whether your chart is overall compatible with another person’s chart? It depends on what you hope to get out of the relationship.

If it is important to you to have a relationship that lasts a long time no matter what, look for Saturn connections between your charts, especially from one person’s Saturn to the other person’s Sun, Moon, Ascendant, or Venus.

If it is important for you to have a relationship where communication is easy, look for Mercury connections between your charts. Trines or sextiles between one person’s Mercury and the other person’s Sun, Moon, Ascendant, or Venus would be especially helpful.

If it is important for you to have a relationship that pushes you to grow, even if the growth is not always comfortable, look for the other person having planets or other significant points conjunct your North Node. Chiron or Pluto connections in synastry can also be involved in finding and healing old wounds, though sometimes they can create new wounds too.

If it is important for you to have a relationship where there is a lot of activity, so that you are never bored, look for Mars connections between charts. Good Mars connections, especially trines and sextiles, can help you and a partner get things done together. This would be ideal if you hope to, for example, renovate a house with your partner.

Conjunctions, squares, or oppositions in synastry between Mars and Saturn or Mars and Pluto can be more trouble than most people are equipped to handle, though. Saturn and Pluto tend to hold things in, which is not bad in some circumstances, but the aggressive force of Mars is better off having an outlet. 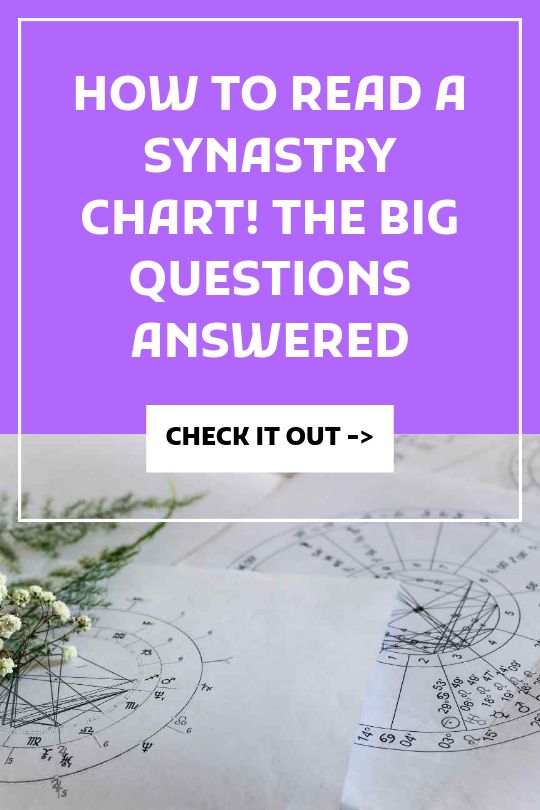