If you are interested in astrology and divination, you may wonder if your zodiac sign can predict death.

While astrology can’t tell you the exact way you will die, certain astrological influences such as the signs that appear frequently in your birth chart can give you an idea of how and when you will pass away.

Before we delve into the topic of astrology predicting death, I want to point out the Related Articles section at the bottom of this page.  I have listed a number of articles that I know you will enjoy.  Make sure you check them out!

How Can Astrology Predict Death?

Astrology is not like tarot cards, palm reading, or a crystal ball. Astrology is based on science and heavenly body placements, and how they are proven to affect humans.

Astrology can predict someone’s personality, how they communicate, what type of career suits them, and their compatibility with others.

It can’t predict the exact time or way you will die, but certain astrological influences can help indicate these things.

Each zodiac sign has a guiding heavenly body (and some have two!) that tells us something important about that sign.

Each heavenly body is correlated with a particular concept that can help predict the timing and how a person will die.

Here are the planets and their associated zodiac signs. Based on your sign’s guiding heavenly body, you may be able to predict how and when you will die.

Note that if a sign appears frequently or has prominent placements on your birth chart, that sign’s correlated planets could also be a factor in your time and method of death, not just your sun sign’s planets.

Mars is the planet of war, aggression, passion, separation, and assertion. It is the only guiding planet for Aries and one of two ruling planets for Scorpio.

If you are an Aries or a Scorpio or have strong Aries and/or Scorpio placements on your birth chart, you are likely to die a violent death.

Heavy Mars placements indicate death by fire, explosion, gunshot, stabbing, or other violent ends. Because death will be violent and sudden, it is likely to be early and unexpected. It is also likely to be a quick death.

Venus is the planet of love and beauty. It is the ruling planet for both Taurus and Libra. Venus is also the only planet named after a female, so it indicates feminine energy.

Those born under the signs Taurus and Libra or have a lot of either of these signs on their birth charts will probably die a calm, peaceful death at an old age.

Astrology indicates that those with strong ties to the planet Venus will live long lives, and their deaths will be more of a celebration of a happy life than a tragedy.

Venus also represents ending suffering, so it could be that those with heavy Venus influences will die after battling illness for a long time.

The planet Mercury represents communication, technology, information, and learning. It is the guiding planet for both Gemini and Virgo.

Someone with a lot of Gemini or Virgo in their birth chart will likely die of exhaustion or old age. Mercury’s influence encourages hard work without taking enough time to stop and recharge.

A person with a strong Virgo or Gemini presence in their natal chart could die after a long fight with an illness, or on a hike in the wilderness if they didn’t prepare and bring enough resources.

Pluto is the planet of death, rebirth, power, and transformation. Along with Mars, Pluto is the second ruling planet over the zodiac sign Scorpio.

Scorpios or those with an abundance of Scorpio in their charts could die a sudden, unexplained, and mysterious death. It might be a violent end and will probably result in a lot of confusion and dissatisfaction from this person’s loved ones.

Examples of Pluto deaths are unanticipated and bizarre accidents or sudden aneurysms in people who have never had previous health issues.

The timing of a Pluto death is uncertain, but death will occur swiftly and unexpectedly under the influence of this small but powerful heavenly body.

Jupiter is the planet of luck, wealth, higher education, and travel. Those with a lot of Sagittarius or Pisces in their charts will likely cheat death at least once in their lives, thanks to the lucky influence of Jupiter.

People with a lot of Sagittarius in their charts are unlikely to die close to home. They will probably pass away while traveling, but thanks to Jupiter’s luck it is unlikely that they will suffer death from transportation (such as a car or plane crash).

Saturn, with its stunning and recognizable rings, is the most distant planet from Earth that can still be seen with the naked eye. All of the planets beyond Saturn in the solar system are considered mysterious, supernatural forces.

Because of its astrological significance, Saturn is perhaps the most helpful planetary predictor of death, both of death’s timing and cause.

Capricorns, Aquarians, and those with Capricorn and Aquarius appearing frequently on their birth charts can expect to live long lives. As the planet of time, Saturn indicates a longer lifespan.

This isn’t true in every case, though, because Saturn is also the planet of karma. If you have karmic debt from a past life or unresolved karma from this life cycle, your life may be cut short by Saturn’s influence.

On the other hand, Saturn may grant you enough time to fulfill your karmic debt during this lifetime. It all depends on the nature of your karma and whether or not you are actively working towards fulfilling your destiny.

Approximately every 30 years, Saturn returns to the same position it was in when you were born. This is called your “Saturn return,” and it’s the time when Saturn causes great upheaval.

If you haven’t been living authentically or going down the path you are destined for, Saturn will redirect you, sometimes in unpleasant ways. The outcome is always for the best in the long-term, but Saturn’s lessons can be uncomfortable during your Saturn return.

Because Saturn return happens about every 30 years for each person, that means you will experience these hard lessons and astrological tough love around ages 30, 60, and 90.

If your karmic debt has been fulfilled, you may die at any of these ages to proceed to your next life cycle. If you have fulfilled your debt but have an enjoyable life that helps others, you could live longer.

And if you ignore Saturn’s lessons and reject the path you are meant for, you could die during any of your Saturn returns.

You can read more about influences of Saturn in these articles:

As the first planet past Saturn, the last planet visible from Earth, Uranus represents the unknown, the surreal, and the unexpected.

It is the quirkiest planet, ruling over the eccentric zodiac sign Aquarius. Aquarians or those with a lot of Aquarius influence in their birth charts can expect to die in strange, unusual, and unexpected ways.

A strange and unexpected death doesn’t have to mean death at an early age. It just means that the cause of death won’t be what you think it is.

This can be advantageous if, say, you suffer from a chronic illness. If you have a lot of Aquarius on your birth chart, you probably won’t die from the illness, because that would be an expected cause.

Instead, an inexplicable accident, a bizarre health issue, or something else surprising will mark the end of life for those under Uranus’s influence. Death will likely occur suddenly and swiftly, so even a diagnosis of a strange, rare chronic illness isn’t likely a death sentence for someone with a lot of Uranus in their chart.

Uranus is also considered the “grandfather” planet, which indicates that although death may be sudden and unusual, it will likely occur later in life. Uranus teaches us to expect the unexpected, even when it comes to death.

Like Uranus, Neptune is another planet that isn’t visible from Earth. In astrology, Neptune represents water, spirituality, and creativity. It is also the planet tied to Pisces, the final and oldest sign of the zodiac.

People with a great deal of Pisces in their birth charts are more likely to die from drug-related deaths, addiction, and water-related accidents like drowning or slipping on ice.

While not technically a planet, the Sun still has a powerful influence on one’s chart, including predicting the time and cause of death.

In astrology, the Sun represents life, the creative mind, and the will to live. The Sun is the guiding heavenly body for the zodiac sign Leo.

Leos or those with a lot of Leo in their natal charts are strong and hearty. They can live long lives, particularly if they pursue their passions and dreams, which strengthens their will to live.

People with a lot of Leo in their charts need to look out for health issues related to the heart. Just like the sun may one day burn out, the heart can give out, too.

Like the Sun, the Moon is not technically a planet, but is still of great importance in astrology. The Moon is associated with the zodiac sign Cancer.

You might think that the planet associated with the zodiac sign Cancer would predict the disease of the same name as the cause of death, but this is not the case.

Although cancer is a potential cause of death for those with a lot of the zodiac sign Cancer in their charts, they are no more or less likely to have cancer in their lifetime than any other sign or to die from it if they have the disease.

The Moon represents mystery, the feminine, family, and home. If Cancer has a strong presence in your chart, you are likely to die peacefully at home, surrounded by loved ones. The cause of death may be sudden or mysterious but will be gentle.

Astrology may not be able to predict the exact time or cause of death, but it can show us the strong possibilities of how and when a person will die.

Based on the signs in your birth chart and their planetary influences, you can get a better sense of how and when you will die, and what behaviors to avoid so you have a longer life. 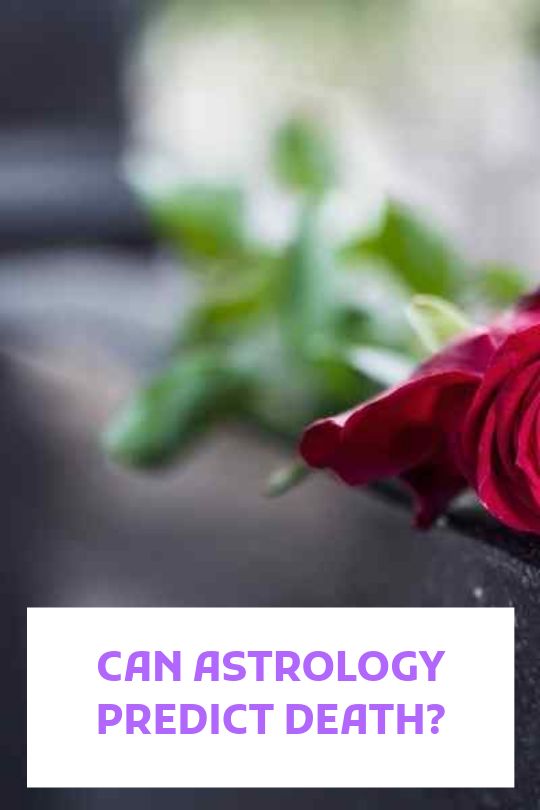 What is Adolf Hitler Zodiac Sign? Did Astrology Predict His Life? – Vekke Sind