Venus in Aries is sometimes thought of as a placement that struggles with love. This does not always have to be the case, however, as long as people with Venus in Aries and their partners understand the strengths and weaknesses of their unique style.

The placement of Venus in your astrological chart shows what you value. People with Venus in Aries have a powerful drive toward independence, and they value the freedom to do things their own way.

Venus Basics: Which Sun signs can have Venus in Aries?

Venus stays within two signs of the Sun in terms of relative position to Earth. That means people who have Venus in Aries can have the Sun in only the following signs: Aquarius, Pisces, Aries, Taurus, or Gemini.

A person who has both the Sun and Venus in Aries knows what they want and will go out and get it. A person with Venus in Aries and the Sun in one of the air sign options, Aquarius or Gemini, still likes to have their own way but might be convinced to see reason on occasion.

A person with Venus in Aries and the Sun in Pisces or Taurus, however, might have more internal conflict. Aries and Taurus at least have in common that they are both stubborn, but Taurus likes physical security, while Aries likes to be free to follow the whim of the moment. Pisces, like other water signs, is more focused on emotional security, but the impulsive spirit of Venus in Aries could threaten that as well.

Venus Basics: Why is Venus in detriment in Aries?

Each of the Zodiac signs is ruled by at least one of the planets or luminaries. Venus rules two signs: Taurus and Libra. The signs ruled by a planet are the signs where that planet’s interests are expressed most straightforwardly and with fewest complications. Venus has to do with what you value, which encompasses both money and love.

Venus is in detriment in Aries because Aries is the opposite of Libra, one of the signs Libra rules. When Venus is in detriment, its domains of money and love become more complex than usual. There may be trade-offs like getting love at the cost of financial stability, or vice versa.

The opposite of Taurus is Scorpio, so Venus in Scorpio is also in detriment. Interestingly, both Scorpio and Aries are ruled by Mars, so, whatever trade-off Venus in Scorpio and Venus in Aries people decide is their best option, they have the forceful quality of Mars to go pursue it.

Venus in Aries values independence and being seen as an individual. People with this placement may therefore resist some practices commonly associated with coupling up, like taking a partner’s last name or merging finances.

The great side of the Venus in Aries personality is their openness to trying new things. Whether or not they achieve all their goals, their journey is an exciting one. Although, people with Venus in Aries tend to be impulsive in love and money, so some may find them unsettling.

Not everything they try works out, and it is fair to say that Venus in Aries people are better at starting things than at finishing them. Venus in Aries, however, is not complacent in a bad situation. Instead, people with this placement are motivated to solve their problems, even if this sends them into uncharted territory.

The ideal outcome for people with Venus in Aries is a situation where everyone involved has the freedom to meet their unique needs.

Venus in Aries in Love

Aries is ruled by Mars, which loves competition. For people with Venus in Aries, love might be just another competitive sport.

Once the Venus in Aries person catches you, however, holding their interest can be a challenge. They like the thrill of the chase.

If you want to be with your Venus in Aries mate for a long time, you have to find exciting things to do together. Fortunately, ideas will come to them regularly and rapidly, and you just have to hang on for the ride.

Mars is also very physical, so that side of a love relationship can be important and rewarding for a person with Venus in Aries.

A man with Venus in Aries may not be the most sensitive or emotionally aware guy. His attention span for concerns of that sort is not long, and he would find clinginess a major turnoff in a partner.

The Venus in Aries man is a great partner for someone who wants a lot of space to do their own thing. His direct personality would be refreshing for those tired of mind games.

A woman with Venus in Aries may struggle with feeling misunderstood in her life in general. Gender roles could be a source of discomfort for her, as she is naturally more brash and independent than some might prefer women to be.

The gifts a Venus in Aries woman has to offer her partner include her sense of adventure and her willingness to pull her own weight in a relationship. She has a fierce dedication to her principles and won’t let anyone stand in her way to achieve her goals. 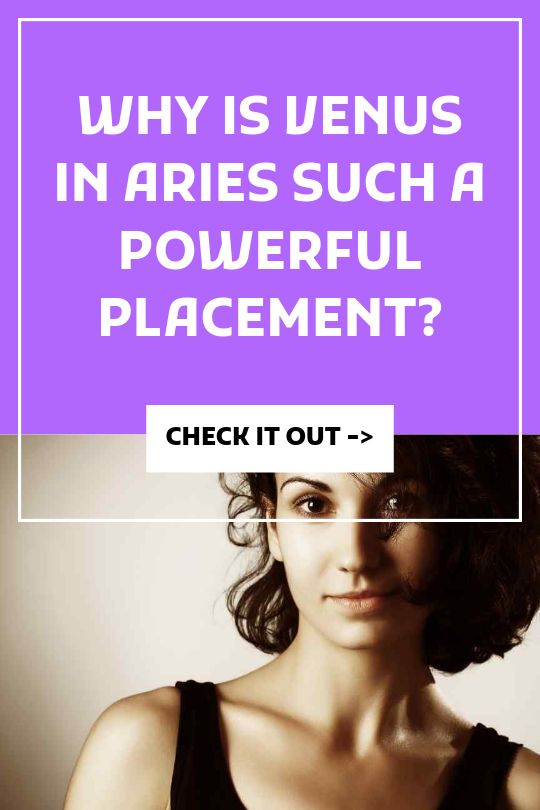 Why is Venus in Scorpio Such a Powerful Placement? – Vekke Sind