In the following article, we interpret the ambiguous Two of Swords in terms of intentions and conflict, and explain its meaning in the Advice and Action positions of a Tarot reading.

The Two of Swords Tarot card as Intentions / What Someone Wants

A person whose intentions align with the peculiar atmosphere of the Two of Swords desires peace of mind, truth, and clarity above all else. However, the card implies they are not very successful at that. They have to make a choice, but they like or dislike both options equally.

With the Ace of Swords, things were pretty clear. Now, complications begin to arise, as parts of the story have been concealed or forgotten. The subject of the reading is starting to feel the weight of an important decision. If they don’t keep calm, confusion will take hold. First impressions and subjective opinions should not be trusted.

The impasse designated by this card is quite easy to understand, though difficult to breakthrough. Some information might be missing while tension and dissent muddy the waters, making them seem deep. In a nutshell, this is about wanting to see what it’s all about, keeping it simple, and figuring things out on your own.

If this refers to a third person, a friend, acquaintance, or lover, make sure you give them some space. They need to take the blindfold off and see for themselves. They might also be upset about something and don’t want to talk about it yet. Be careful; in their temporary blindness, they might perceive a helping hand as a threat and strike back in a passive-aggressive manner unintentionally.

Two of Swords Reversed as Intentions / What Someone Wants

The reversed Two of Swords denotes indifference at best, duplicity, and confusion at worst. It might refer to a person who doesn’t know what they want, who avoids decisions and confrontation at all costs, or tends to confuse and misdirect others. However, it might just as well mean they wish to stay out of trouble.

In this sense, the Two of Swords, both upright and reversed, always brings to mind the consequences of our actions. It’s the voice of hindsight, saying, “did you really want that?”

The card might also reveal a tone of hypocrisy and disorientation for the person involved. While no one really wants to be a hypocrite, many will find themselves in that position, and it’s usually a sign of deeper issues. Finally, it might represent someone who likes to put a pin on things and delay them indefinitely, in order to dodge responsibility or because they’re afraid of change.

What does the Two of Swords Tarot card mean in Conflict?

In conflict and arguments, the Two of Swords points to a disagreement that must be finally put to rest one way or another. There are quite a few awkward layers in this case, and everyone involved should step back to think and find a way to settle this peacefully once and for all.

The Swords thrive in conflict, and the second card of the suit is about addressing the issue and making peace. We are reminded here of the timeless maxim, “if you want peace, prepare for war.”

This is a card of both subtlety and confrontation; it’s up to you whether you will assume the role of the peacemaker who will compromise and balance it out, or formulate your arguments with great care and cunning to “defeat” your opponent and put them in their place in case they have offended you unjustly.

Try to be fair and remember that you might be missing some information here. Without a complete picture of the incident from both sides, you might be led to arbitrary and false conclusions. Make the decision that will either result in a win-win situation or cause the least regret.

What does toe Two of Swords Reversed mean in Conflict?

The reversed Two of Swords is a stalemate, a no-win situation. You are caught in the crossfire, called to settle an argument you don’t really care about; or you might have to deal with a dishonest person who won’t acknowledge your side of the story and is willing to take you down with them.

Peace was never an option; the shadow of this card is a knot in the stomach that nobody really needs. It is confusion and smug deliberate indifference, hysteria, and aggression that stem from pride and doubt; the dishonesty behind a forced smile.

When we do not pacify what must be settled, when we know the truth and yet stay silent or twist our words around to cheat people blind, we invite disorder and embarrassment. A clean conscience is a very precious thing.

The High Priestess would mitigate this conflict through diplomacy, kindness, and pure selflessness; Justice would give a fair and swift judgment, an immediate solution with a turning word. But a person who can masterfully resolve a disagreement is truly rare. The lady in white of the reversed Two of Swords is stuck between a rock and a hard place; either a messenger whose hands are tied or a victim without a voice.

The Two of Swords Tarot card as Action

While the Two of Swords is essentially a passive card, when it designates some kind of action on your behalf, it points to decisions, preparation, research, and finding your balance and direction. Ignore everything that isn’t helping you right now. Make a list of what you want to accomplish and work on that.

The most common interpretation here would be a hard decision that requires a lot of thought, but with this card, there’s always more under the surface.

Notice the symmetry of the image, the woman’s posture, and expression of intense concentration; she’s motionless but not idle. Remember, even a seasoned blade master would constantly practice and keep the equipment keen and clean. Practice makes perfect, but both perfection and correct practice require careful planning in advance.

So, in terms of action in general, the card’s about detachment from distractions and preparation for what awaits in the future.

It’s advisable to make a list of everything you think about doing in your life, at least for the short term. Think of it as a rough blueprint for manifesting your dreams and ambitions. Now divide the list in two and be serious about it: put the goals that are the absolutely most important, but also doable, on one side and everything else on the other. Then, you must ignore the second group at all costs because that is what diverts your attention and keeps you from doing what you really want!

Two of Swords Reversed as Action

When reversed, the Two of Swords as an action card points at the bedrock of confusion. This is not the time to engage in social activities and concern yourself with the affairs of others. Stay true to your will and away from unnecessary tension.

This card in reverse often points to an overload of information and stimuli; that’s why the woman has put on the blindfold, to protect herself from all those things that stress her out constantly.

Here, we start to learn the value of saying “no” and holding our position, so we can focus on our goals and well-being without the pressure of biased opinions, to spare ourselves the delay and confusion that comes from trying to please everyone in return for a shallow kind of acceptance.

The Two of Swords Tarot card as Advice

The Two of Swords as an advice card is simple to interpret and yet hard to follow through. You might have to make an important decision but you’re missing information or motivation right now. Furthermore, the cards are about finding balance and harmony, but these cannot be found by searching and looking.

It might feel like your mind is pushing and pulling you in opposite directions. You have to choose between two sides, but both seem equally pleasant or equally painful!

So, what advice is there to give in such matters? Could we say “gather your thoughts and find your balance?” Is there any actual meaning there? Words fall short in this dilemma, and without a complete picture, one can only speculate. The more you look for a solution the less you find, and even if you find something, you might realize it wasn’t what you wanted after all.

This is nothing like the conscious choice of The Lovers, where all options are valid and will help you move on. The Two of Swords works on a subliminal level, it’s like trying to see without eyes, like grasping and stumbling in the dark; the best you can do is not lose your footing.

The key here is to allow the mind to return to the natural state, back to the Ace, by excluding anything that might feel unnatural and phony.

Two of Swords Reversed as Advice

The reversed Two of Swords in the advice position tells you to carefully and directly assess your feelings and thoughts without involving anyone else. Ask yourself, “where am I right now and which way do I want to go?” The card might also imply that deception is at play.

Something’s amiss and troubles your thoughts, but what is it? With eyes wide shut, it’s difficult to tell. Draw a couple more cards on either side of the Two of Swords to reveal the source of unease.

Someone in your close circle might not be completely honest with you. Or it could be that your mind is overflowing with information, and you need a short break to reorganize your thoughts. To reach inner peace, subjective rationalizations must cease so the mind can be purified, but if we start discerning between pure and impure thoughts, when will the search end? The moment we “get it,” in reality we just missed it.

You must be honest with yourself, that much is certain. Don’t run away from decisions, but also don’t blindly accept situations that ultimately stress you out for no good reason; as long as your conscience is clean and your heart’s in the right place, you’ll be able to figure it out and see right through. 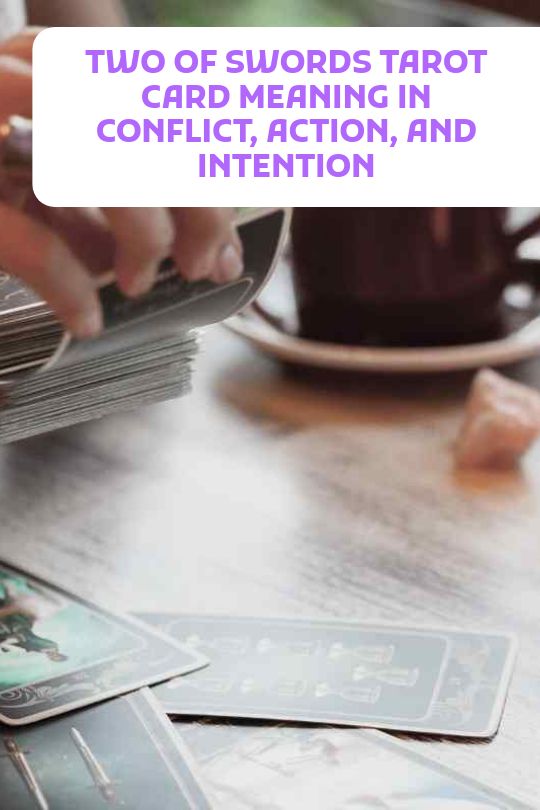