If you are dating or want to date an Aries man, you need to know how to text him in ways that keep his interest and make him attracted to you.

Keep your text messages to an Aries guy short and sweet. He’s not the type to be glued to his phone, so use texts to make plans, share exciting news, or to compliment him. If you speak his language over text, you can get an Aries man to fall for you.

Now let’s talk about some strategies to flirt with your Aries man, to seduce him via text, and review why he may not have replied to you.

However, if you are looking for in-depth training on the specific phrases that your Aries man will respond to, then, then check out zodiac-based relationship expert, Anna Kovach’s book Aries Man Secrets.

The details in Anna’s book will have your Aries man like putty in your hands… I’d recommend that you check it out (after you’ve read my article)!

How to Flirt With an Aries Man Over Text

If you want to get flirty with an Aries guy over text, then you need to understand both his texting style and his flirting techniques.

An Aries guy doesn’t play games, but he enjoys the thrill of the chase perhaps more than any other zodiac sign. The key to texting an Aries man is, be honest and direct with your communication, but don’t give away too much too soon.

Another important thing to remember when texting an Aries guy is that his general disposition is impatient and irritable. He doesn’t have a great attention span and will become frustrated if too many seemingly pointless texts are exchanged.

For example, an Aries guy usually doesn’t like to engage in long, back and forth conversations over text. Sending an Aries guy a simple, “Hi” text to start a conversation will just annoy him.

Instead, offer a reason for your text, like, “Hey, I just heard this song on the radio that made me think of you!” Your Aries guy will be flattered that he’s on your mind, and he will text back to find out which song you were listening to.

Each zodiac sign correlates with a specific set of body parts that reveals something important about that sign. The body parts for Aries are the head and face, which includes the brain and reveals that Aries are highly intelligent.

They like witty banter and clever jokes in texts, so don’t be afraid to show off how smart you are in your texts to an Aries man.

Some signs are very literal and can’t stand being teased, even in a humorous way. While an Aries guy is secretly insecure, he also loves self-deprecating humor and enjoys bickering and teasing as a form of flirtation.

If an Aries guy pokes fun at you in texts, he’s not being unkind. It’s his way of creating intimacy and showing that he notices the little things about you.

For example, when an Aries guy texts, “Do you think you can squeeze me in after your dumb hair appointment today, busy lady?” he’s showing you that he remembers your schedule and wants to see you.

When flirting with an Aries guy over text, don’t be afraid to be sassy and tease him back. In response to the previous text, you could say something like, “I’ll see if I can fit you in – how about 7:00?”

Before we get into the ways you can seduce your Aries man by text, it’s probably a good idea to check how compatible you are with your Aries man…

How to Seduce an Aries Man Over Text

Flirting and seducing over text are a bit different. Flirting is a way of expressing interest and showing a potential romantic partner that you care while seducing is expressing sexual interest and trying to initiate physical intimacy.

Aries is perhaps one of the least subtle signs of the entire zodiac, so don’t try to be coy with your Aries guy. When you are trying to seduce him, be honest and direct instead of trying to make him guess what you really want.

Aries men are strong-willed and assertive, so an Aries guy likes a woman who knows what she wants and goes after it. Text him that you want to hook up, and your Aries guy will come running over if he’s in the mood, too.

Another way to be direct with your Aries guy over text is to send him a sexy photo. Remember, he likes the thrill of the chase, so don’t show him everything in the picture.

Take a photo of yourself in sexy lingerie and tell him to come over and take it off of you. Red is the color associated with the zodiac sign Aries, so opt for red underwear when you want to seduce him.

Aries men are very active people and they need thrills and excitement to be fulfilled. You are sure to seduce an Aries guy if you text him with a suggestion of something new or wild that you want to try in bed with him.

Text him a sexy article, photo, or video for inspiration, then ask, “Wanna try this tonight?’ Your Aries guy will be drooling all day thinking of seeing you later.

27 Unique Phrases that specifically turn on your Aries man…

If you are looking for a unique way to specifically seduce an Aries man with words and phrases, then you must check out this list. 27 Phrases to seduce an Aries man. These phrases have been identified by Anna while working with hundreds of clients dating Aries men.

That said, let’s talk about things to text an Aries man…

Things to Text an Aries Man

An Aries guy is very impatient and has a short attention span, so he would probably rather text than talk on the phone most of the time because it’s faster and more convenient.

Although he prefers texting to talking on the phone, this dynamic sign would rather see you in person than text or call you.

Don’t text an Aries guy just to have a conversation to pass the time. He hates small talk and will start ignoring your messages if they are boring or meaningless.

Your texts with an Aries guy should have a purpose. For example, making plans is a great reason to text an Aries man. You could also text him any exciting or interesting news that just can’t wait until you see him in person, like if you got a promotion at work or a mysterious package came in the mail for him.

Aries need mental stimulation to stay interested in someone, so you should also text your Aries guy messages that keep his brain active. Send him fun puzzles to entertain him, or play a phone app game together and text him about it.

Aries people are notoriously competitive, so engaging your Aries guy in any sort of game or competition is a sure way to keep him interested.

Aries men are also very playful and childlike, so try to make your Aries guy laugh at your texts. Send him jokes, humorous internet videos, and funny memes to make him laugh.

Aries is a notoriously selfish and self-centered sign, so it makes sense that an Aries guy loves to talk about himself. He is also insecure, although he works hard not to show it.

This means that texting him compliments goes a long way towards winning over an Aries man.

Why Didn’t an Aries Man Text Back?

People born under the zodiac sign Aries are quite direct and can be brutally honest. They can’t hide their feelings, even if they try.

They don’t like to waste time on pleasantries and they won’t engage in a conversation with you when they don’t like you just to be nice.

If an Aries man doesn’t like you, you will know it. If he never texts you back after multiple attempts, it’s a clear sign that he’s not into you.

Anger is the default emotion for Aries people, so there is a good chance that your Aries guy isn’t texting you back because you did something to annoy or upset him.

If your text to him was too long, your Aries guy might ignore it because he just can’t be bothered to read all of it.

Aries men aren’t the type to be too attached to their phones, so another possible reason why he’s not texting you back is that he’s simply not checking his messages.

Aries don’t like small talk or unproductive texts, so if you just message an Aries, “Hi,” or “How are you?” he might not respond. If you send him a message without a question in it, he might not reply because he doesn’t think your text requires a response.

Now that you have insights about your Aries man and some strategies about texting him. There are some specific phrases that you can use to really turn on your Aries man.

As I mentioned at the beginning, Anna Kovach has worked with many women dating Aries men, check out her book. Aries Man Secrets.

She can give you an exact blueprint for what phrases to say to your Aries man in the ways that he will respond to you both physically and emotionally… click here to check out Anna’s 27 Phrases.

If you want to win over an Aries guy with your text messages, you need to know his communication style and how he behaves in relationships.

To keep an Aries man’s interest, keep your messages direct and to the point. Text him lots of compliments, exciting news, entertaining puzzles, and funny jokes.

Feel free to make fun of him in a good-natured way, but don’t text him just to make small talk to pass the time.

By following these guidelines, you are sure to intrigue your Aries guy and make him like you. 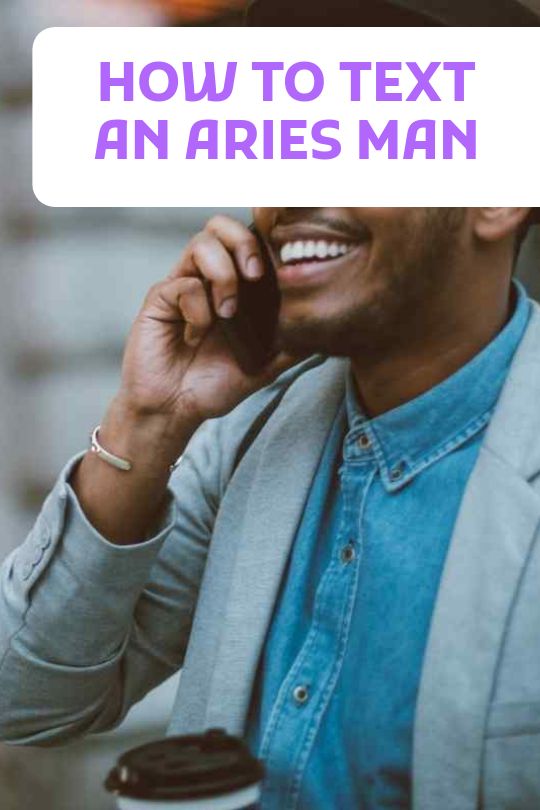 How To Text A Sagittarius Man – Vekke Sind