This article is written for the Taurus woman that is interested in details about marriage to (or a long-term commitment with) a Pisces man.

In the case that you are a Pisces man reading this and are looking for insights into marriage to (or a long-term relationship with) a Taurus woman, then click over to read the article, “Taurus woman and Pisces man in marriage”.  It’s specifically written for you, the Pisces man!

So, let’s begin… The Pisces man is ruled by Neptune, the planet of the Unconscious. This may be one of the reasons he is often called the dreamer. In traditional astrology, he is also ruled by Jupiter the planet of expansion and luck. This makes the Pisces man imaginative and is inclined to see the bigger picture and is adaptable wherever he goes. As a water sign, he is sensitive and will naturally absorb emotions around him.

The Pisces man and Taurus woman in marriage are like a dream come true. They tend to be sweet and gentle to one another. These two are partners that will work toward creating an ideal life. There is a lot of romance and ease when they are together. It is a type of partnership where one is weak, the other strengthens.

If you want even more details about your Pisces man, check out “Pisces Man Secrets“. But, before you do, let’ talk about the Pisces man and Taurus woman dating…

You see, the Taurus woman may appreciate the softness of the Pisces man, which is not always common for very masculine types. For her, he is breath of fresh air. There might be denial at first, but eventually, they can’t help but realize that they like one another.

The Pisces man will try and be the man who will take care of her. He will be nurturing and very patient towards her. What will make her fall for him fast is how validated she feels when she talks to him. Even though the Taurus woman is reserved and takes love slowly, she might make an exception when it comes to a Pisces man.

Home dates will be frequent, they might binge on movies. They have a dynamic that knows what the other wants without them needing to talk. Now, sometimes this only happens during the early stage of the relationship. In order for them to take it to the next level and commit, they would have to find out if what they want are the same.

For more details about “Dating a Pisces man… and the 12 things you need to know!” click here.

There will be a sense of playfulness and eroticism when the Pisces man and Taurus woman make love. They just can’t get enough of each other. The Taurus woman is capable of lasting all night. She will be patient with her Pisces man, and she will be rewarded when he has lost his shyness.

They might be open to pretend play, there’s this vulnerability when they’re physically intimate. It’s not just about physically feeling pleasure but the feeling of deep love and affection. You see, the Taurus woman isn’t particular with what moves he’s going to give her, what’s important is that her emotional needs are met and the Pisces man is comfortable letting himself loose.

For 6 Steamy tips to turn on your Pisces man in bed, click here!

Many times, their friendship is healthy. They both love to be comfortable. Venus, Taurus’ planetary ruler is even exalted in the Sign of Pisces, they will be alright with eating out or even better when they hang out at home. Movies might be a good way to bond. The two of them can have quiet natures which feel at home so it works for them.

In love, this is a relationship that can make it last. The Taurus woman finds security in the gentle nature of the Pisces man. He makes her feel validated and heard. He is able to make her feel appreciated and admired.

Besides, when a Pisces man loves, he tends to be a nurturer. He wants to take care of her needs whenever he can. There might be times that a Pisces man can become moody. Even worse, if there isn’t maturity on his part, he can slowly fall into depression quite easily.

Most Pisces men comment that they are ashamed of their feminine side and how they are emotional but in fact, this is a strength. It is also good for the Taurus woman to know that is something that’s beyond his control and what makes him who he is.

Though he makes up for it by his selfless nature, as he usually puts the Taurus woman first. It might be cliché, but the phrase, they complete each other, is really describing them. They have mutual respect and support. Though there will be times that misunderstandings can arise.

Another good news is that the Taurus woman is patient and if they have a strong foundation together, she will be the type to endure rather than leave. She will nurture him back just like how he was patient with her. They have a balance that never fails to make the Taurus woman happy, and the Pisces man feels fulfilled as a partner.

Does and Pisces man and Taurus woman work, is it a good combination?

The Pisces man and Taurus woman are not just good, it is an excellent combination. This is whether they are friends or lovers, they will always be compatible. The Taurus woman has this homely presence that attracts the Pisces man.

To him, he admires her silent strength and persistence. She is also quite practical which for him, as an emotional water sign, is something that he finds difficult to control. They are able to balance each other very well.

Check out “Pisces Man Secrets” for everything you ever wanted to know about your Pisces man… (but were afraid to ask!)

Marriage between a Pisces man and a Taurus woman, final words…

The Pisces man and Taurus woman in marriage is a clear winner. Their compatibility is excellent and it won’t be surprising if they end up spending the rest of their lives together. You see, the Pisces man has a selfless and sensitive spirit. He makes the Taurus woman feel like she is valued and appreciated.

Every woman despite her sign wants to be acknowledged this way. The Pisces man may feel ashamed for his feminine side but it is actually one of his strengths. He may struggle to control this side of him and he may succumb to feeling depressed.

Though this is a great pair, it’s not always perfect. The Taurus woman has to also soften up from time to time to let the Pisces man shine. He might have feminine qualities but he is still a man who wants to be a great provider. He still wants to be able to lead his wife and maybe his future family. 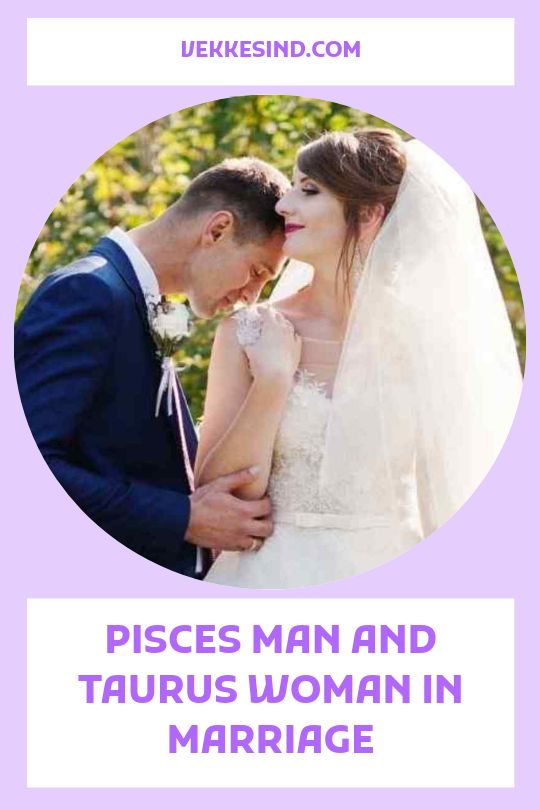