Pisces is the “Universal mind” part of the Zodiac wheel where the water element has a mutable nature, which shows that a person is connected with the Higher mind of creation.

The spark of spirit imagined in Aries, materialized in Taurus, spread in Gemini, rooted in Cancer, exploded with joy in Leo, accomplished through realistic actions in Virgo, united with others in Libra, died and transformed in Scorpio, reborn in Sagittarius, resulted with accomplishments in Capricorn, united with others in Aquarius, is now returning to its cosmic origin.

A Pisces woman is all about inspiration and uplifting, frequently spiritual feelings of calm joy and beauty. And to be able to attract her, you should be talkative, but deep, mysterious, and practical at the same time. She will fall for those who can be different from all others, and give her impression of exclusivity.

Before we delve into the details about how to attract a Pisces woman, I wanted to mention a program that I’ve discovered. It’s the most comprehensive program for men to succeed with women that I’ve come across. Whether you’re going on the first date, or have been married for years, this program cuts to the root. It gives men their power back.

Check out Derek Rake’s “Shogun Method“. It’s not specifically about Pisces women but is about male and female psychology and how you can use that to your advantage.

That said, I’ll also provide a link at the end of this article. First, let’s get into some details about Pisces women…

Is Pisces woman too sensitive or too romantic?

Many misconceptions revolve around Pisces woman, adding confusion and mystery around her. However, although she is very imaginative and intuitive, she is far from being too sensitive, and she can surprise many people reacting practically and logically when all others around her are confused.

The sign of Pisces is ruled by the planet Jupiter in the traditional sense, and by Neptune as a modern co-ruler. And in this sense, Pisces is seen as the sign which operates with spirituality, higher consciousness, and illusions, on the negative side.

This is why Pisces woman is perceived as someone who is not capable to cope with the usual challenges of life.

However, this is far from the truth because Pisces woman can get lost in love or any other feeling, but she is also basically affected by the planet Mercury, which is the ruler of her area of relationships placed in Virgo.

If this planet is placed in Aquarius or Aries in her natal chart, then she will be far from acting moody or confused when it comes to a committed love.

Mercury is never too in front or far behind her natal Sun, naturally positioned in Pisces, and it can be in Aquarius, Pisces, or Aries. Mercury is not just the planet that will describe her partner, but also her natural reasoning and logic needed for usual, down-to-earth thinking. And even in Pisces, this planet will remain smart and practical, although prone to fantasies.

Naturally, the way a Pisces woman will experience love will be seen through her natal Venus, which can be positioned anywhere from Capricorn, Aquarius, Pisces, Aries, or Taurus. And if her natal Venus is in Capricorn, she will feel the strong attraction toward much older partners, people who are established and disciplined.

In the situation when a Pisces woman has her natal Venus in Aquarius, then she will fall for rebellious types of people and probably have some secretive affairs with them.

If her Venus is in Pisces, she will fall in love with those who resemble her, and usually, those people will be her co-workers or people she frequently meets during the day.

If her natal Venus is positioned in Aries, she will relate love and material safety, and she will be powerfully attracted toward masculine or somewhat aggressive types of individuals.

Lastly, in the case her natal Venus is in Taurus, she will need to become best friends with someone to be able to open up as a lover. And she will love those quiet, but strong and down-to-earth kinds of people.

What are the main traits of a Pisces woman?

Pisces woman is romantic, talented, extravagant, and knows how to take risks in life, as well as in love. Sometimes she can pretend to be invincible, but in essence, she is very soft and sensitive, full of visions, dreams, and ideas that may seem strange today, but very achievable in the future.

She loves music and is intoxicated by romantic melodies. She is very sensitive to other people’s pain and is sacrificed when she needs to help someone.

On the other hand, she can be inaccessible, even wild, thus hiding her infatuation. She secretly writes poems and novels, experiencing everything deeply, she wants to be seduced but runs away from the seducer.

This woman, despite all of her suggestibility and emotionality, still knows what she wants from life and love. She is gentle, but she can sometimes act hysterically, just to calm down quickly after. She wants her partner for protection and inspiration, sincere love, and the one that will often cope with her outbursts and crises.

She is usually very beautiful and charming, and her strange and gentle glance can fascinate and enchant everyone. Because of her great intuition, she often seems to be clairvoyant and can predict the future.

How to pursue a Pisces woman?

A Pisces woman wants a contradictory partner from her dreams. She would instantly fall for someone gentle, yet strong and masculine by nature, someone who doesn’t talk, except in a situation when this person talks, and talks persuasively, someone big and dark, yet very soft and light.

Pursuing Pisces woman can be almost impossible or very easy depending on the fact are you able to “flow” with her basic frequency.

Her emotional states and desires will change all the time, and for someone logical and organized this will be an incredible problem because whatever this person does will seem to be done at the wrong time. Common sense won’t help you at all with her.

But on the other hand, if you can “feel” her, then you will know when to approach her as a friend, a lover, someone masculine or feminine.

You must also step into her vibe to know whether you are allowed to come closer and kiss her for instance, or you could get her heart faster if you step back and let her crave your attention. It’s really the matter of the proper timing, proper to her heart.

Check out Derek Rake’s “Shogun Method” to get the tools you need to be the “man” in any relationship. Whether you are pursuing a Pisces woman, are friends with her, or you’re already in a relationship with her.

How to attract the younger Pisces woman

If you want to attract a younger Pisces girl, you must act show your witty mind, and “talk” her into your unique qualities. You must show her that you are different than the rest of the world, very successful, humorous, and generous, but at the same time vulnerable, and she will fall for that.

In a Pisces girl’s natal chart, the perfect partner for her is marked through her natural partnership area which is positioned in the sign of Virgo. This sign is ruled by the planet Mercury, and this planet can be placed in her chart in Aquarius, Pisces, or Aries.

If her natal Mercury is in Aquarius, she will feel attraction toward rebellious types who fight the system and are in a constant war with everything that doesn’t lead toward improvements or innovations. The sense of excitement must be in front of her to make her feel alive and in love.

If her natal Mercury is in Pisces, she will then fall for poetic types who will play a musical instrument, sing or simply focus on fine arts or some specific sciences. The aura of mystery will trap her heart in this case.

If her natal Mercury is in Aries, she will expect the fiery character from her partner, an increased dose of masculinity, and efforts in everything that person does.

How to attract a mature Pisces woman

To attract a mature Pisces woman, you should become deep, you have to have some significant experiences in your life which shaped and transformed your soul, and yet, you have to be family-oriented, know your roots and treat her with enormous respect, as well as fiery and romantic passion.

The sign of Pisces is seen as the “dual” sign in astrology and this is why it’s not uncommon to see the mature Pisces woman divorced, separated, or simply single and available at her age.

This phase of her life will be the best she will have because she will get rid of shyness and confusing emotions, and now, she will know that she wants more than just some sweet talker to sweep her off her feet.

In this time frame, her natural areas of romance and talents, seen through the sign of Cancer, and her area of spirituality and second marriage, according to some western astrology teachings, seen in Scorpio, will become very powerful.

This is why she will seek someone who acts calm and is home-oriented. And even if this person is not interested in household activities, they should appreciate homemade meals and a warm and nicely decorated place to return to after a hard day in the outside world.

At the same time, this person should be strong inside, and this strength is accomplished through a series of very challenging life events, where the person had to destroy and create everything from zero. In this sense, you will have to be soft on the outside and hard on the inside to catch her heart and keep it.

OK. Now that we’ve covered the details about how to attract a Pisces woman… I mentioned at the beginning, if you are looking for more in-depth (Military Grade) training to get your Pisces woman addicted to you emotionally, then I’d also suggest you check out relationship expert Derek Rake’s “Shogun Method“. 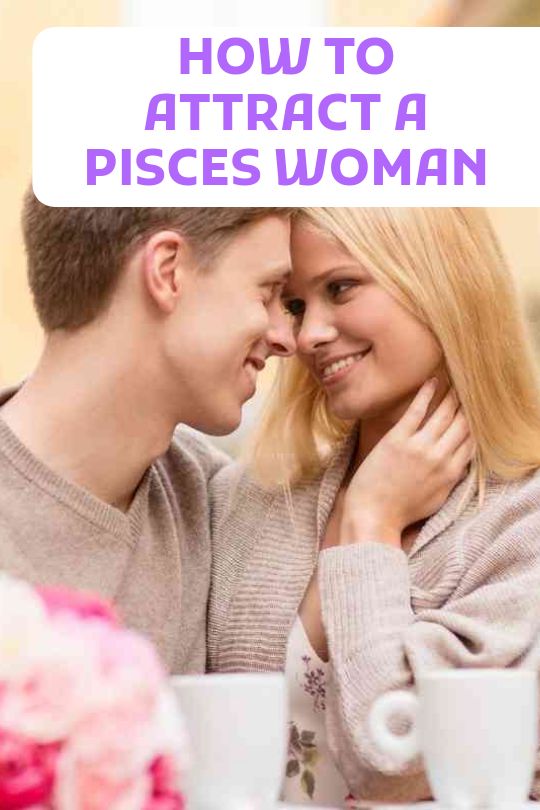