If in case you are an Aquarius woman seeking advice in regards to marrying (or a long-term relationship with an Aries man, then click over to the article, “Aries man and Aquarius woman in marriage”, which is written with you in mind.

So yes, moving on. The Aquarius woman is the rebel, the unique, and the original. She wants to always stand out from the crowd. She can be detached and it’s almost impossible to make her do things that she doesn’t feel like unless she feels that she has a purpose in doing it. Meanwhile, the Aries man is the brash, bold, and confident go-getter. He doesn’t care about what people think of him, preferring to chase his own desires than trivial matters.

The Aquarius woman and Aries man in marriage can work but it may not be a traditional one.  The two signs are stubborn and are clear about what they want. It’s possible they may live far away from one another so they can prioritize their ambitions. If they don’t see you as the one, they won’t agree in the first place.

In the dating scene, the Aquarius woman will excite the Aries man. She likes to be unavailable and the Aries man likes to chase. He is the predator and she is the prey. There is a lot of curiosity when they’re together and it is most likely that they may spend time together doing creative activities.

The Aquarius woman can be idealistic. She might sometimes be so stubborn to her cause that the Aries man may think she’s not thinking in reality. If there is one thing you need to know about her, since she is ruled by Uranus, the planet of rebellion and the awakener, she sometimes can visualize a future that most can’t apprehend.

Maybe she will act eccentric and some may misunderstand her. It could bother her, but at the end of the day, the Aquarius woman is detached. She knows that there is more to life than romance and she wants to have recognition for her efforts and to contribute to the world as a better place.

The Aries man will love her unapologetic attitude. He will value her company and make the most of the time. He should, as she likes to disappear at times. She may not even realize this. It would be the Aries man that will present himself as a knight in shining armor and try to be romantic, which we would say, good luck at that.

For more details about “Dating an Aquarius woman… and the 12 things you need to know!” click here.

The Aquarius woman is highly experimental in the bedroom which may please the Aries man. She may suggest taking her to places that are unconventional such as going to risky places just to prove a fantasy. She might imagine the things she’s about to do to him meanwhile the Aries man can’t handle it anymore and will just straight-up charge into her.

For the Aries man, desires are there for a reason. He is more of a physical lover and the Aquarius woman is more of an intellectual. Their sex life will be great since both of them enjoy it and kind of treat it as a recreation more than an act of love.

For 7 Steamy tips to turn on your Aquarius woman in bed, click here!

As friends, they will talk a lot. They will share ideas about where to go and if they would want to try out going to an event. They might be open about their encounters and it’s not hard to imagine that they will even rate their hookups and give them one to five stars.

They have a fun and wild friendship. Most topics will be discussed. Taboos will not be treated with discretion. They might have some differences on how things should be but they both admire the qualities of each other.

The Aquarius woman and Aries man also dislike becoming bored and cannot be left in one place for too long. They need to be where the excitement is. They have to constantly be stimulated in order to feel like they’re living. They will support each other in this.

When the Aquarius woman and Aries man commit to each other in love, they have already taken the time to think about it. These two don’t take risks that will hinder them from their freedom and independence. At this point, there has to be some kind of care and love towards one another.

The Aries man is blunt and the Aquarius woman would rather do things that feel natural to her. Communication will be good between the two of them. It might even be weird to suggest that this could be a couple that may allow an open relationship but it would depend on the Aries man if he will not become too jealous and possessive.

They love the spontaneity of the relationship. The Aries man may become demanding of the Aquarius woman since she is a born networker, she loves to make friends. The Aries man might accuse her of flirting when she is just eager to know others.

When it comes to adjustment, it’s mostly on the Aries man’s part. If they can get past the jealous nature of Aries then the Aquarius woman will feel at ease. If anything, the Aquarius woman will look for him more when he is not always around. It almost feels like being unavailable is hot for Aquarius signs which is complicated because fire signs, in general, want to be praised and be treated with importance.

Does an Aquarius woman and Aries man work, is it a good combination?

The Aquarius woman and Aries man is a good combination as friends, friends with benefits, and maybe as lovers. The Aquarius woman is a rebel. This intrigues the Aries man who will discover how fun and unpredictable she can be. What she lacks is something he can strengthen. She is mental and he is physical.

Marriage between an Aquarius woman and Aries man, final words…

The Aquarius woman and Aries man in marriage is an excellent match but it will be an unconventional one. The two can have a great capacity for commitment but the Aquarius woman is too freedom-loving to settle like how society has always done.

She feels as though there is more to life than settling down and creating a family. She wants to be a contributor to humanity and make changes for the world. She thinks of the future and does not let the past burden her. The Aries man will appreciate this mentality of hers and take it as a challenge to keep her.

The two-dislike boredom so much that when they’re together, they do anything to keep them from feeling it. These two can be ambitious and can dream big. They might end up living far from each other. Maybe their jobs require them to travel often so time might potentially become an issue to them.

Either way, the marriage works regardless of the title. It is like they have the name for it but they act independently and are stuck on the dating stage of a relationship. Though they won’t mind this. Having their own finances and contributing as equals.

And finally… Check out my FREE eBook, click here to download the eBook, for insights into dating and the female mind. 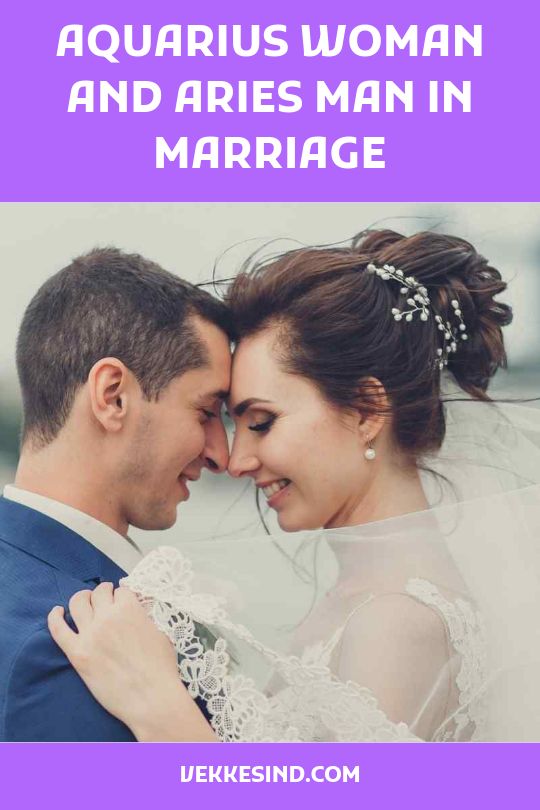