The Aquarius man always gets labeled as the rebel and there’s a reason for it. He can’t be forced to do things he doesn’t want and he tends to be a trendsetter when everyone’s busy copying one another. Though many forget that he is for the community and a true humanitarian. Aquarius knows there’s more to life than fairytales and wants to be known as someone who stood out from the crowd.

The Aquarius man in marriage is the unconventional union. He will surely have a life separate from the marriage. He’s usually not the first choice for a committed relationship, he might be too detached to keep the flame alive and he loves his freedom too much to be told what to do.

The Aquarius man in courtship

If you manage to win the heart of the eccentric Aquarius man, then anything is possible. The normally commitment-phobic Aquarius man will go to the ends of the earth before letting himself be tied up with someone.

Then again, if you push forward with a relationship with him, it’s better to accept the ups and downs of being with him. Your Aquarius man gets bored easily and always looks for new experiences that a relationship may sometimes fail to offer him. He wants to be part of a huge community and be the face of innovation.

Though he does care, he won’t be able to express it. You may just notice it through his behavior. When your Aquarius man loves you, he spends more time with you. He creates something to talk about just to be able to bond with you.

Sometimes it can baffle someone to think that you would put yourself into loving an Aquarius man, maybe you should ask yourself if you are sure about what you’re doing. You’re going to need a lot of patience and understanding because he’s never going to reveal what he really feels and it takes time for him to truly trust.

Also, the sensual encounters you will have with him would also be out of the norm. He would be turned on by doing it in public places and where it is risky. If his woman can’t satisfy him, maybe he will keep his girlfriend and see others behind her back.

It is best that you know your boundaries before you even consider dating an Aquarius man. It would be good to know what you truly want in a relationship and if it’s not aligned with what your Aquarius man finds happiness in, it’s best to check for different fish in the sea.

Marriage with an Aquarius man

The Aquarius husband can be occupied with just his thoughts

You would know how intelligent people can seem aloof and lost in their own thoughts. He is not exactly a daydreamer but he does have a lot of curiosities. Your Aquarius husband may not be able to pay attention to you all the time because he is busy looking for inspiration somewhere else.

When he does feel like paying attention to you, expect to experience being the subject when he’s talking to his friends. He will have deep conversations with you, he will be vulnerable but not with how you think. His vulnerability has something to do with revealing his genius ideas that he hasn’t felt confident to reveal publicly.

The Aquarius husband is honest and sincere

In most situations, the Aquarius husband is honest and tells you what’s on his mind. He will not cheat though it’s kind of possible. He is dutiful and would rather just be straightforward with someone rather than be fake towards anyone.

If he does find the marriage to be stale, then he might tell you directly. Depending on his character, he may be alright with seeing another woman while you’re away. Though it’s not more of wanting to betray you simply because he has an addiction to new experiences that are also risky.

Again, he isn’t the husband of conservatives and traditionalists. You would have to have a similar mindset or be detached in the marriage in some way. You may want to seek a life outside of it if you want it to last.

The Aquarius husband is indifferent

Rules and tradition don’t mean anything to him. He likes open-minded relationships and it may even pass on even through marriage. Communication may not be his strong point. Traditionally, he was ruled by Saturn and he is influenced by the discipline and detached style of Capricorn.

The difference is, Capricorn wants to please and keep a good public image whilst an Aquarius simply doesn’t care what others think. He will pursue as he pleases. If you try to force emotions on an Aquarius man, it might turn out to be chaotic. Not only is it awkward for him but it also makes him so uncomfortable he might make a run for it.

The Aquarius husband is the best of both worlds

For the more open-minded couples, the Aquarius husband might be a dream come true. He will be more accepting of a polygamous setting. He could be married to you and still see someone else for leisure. He tends to have a big appetite in the bedroom so make sure you can keep up.

He will be a responsible husband in his own way but unfortunately, he could be what traditional people perceive as their worst nightmare. He can truly show you taboo and things that aren’t always seen by the public because of his rebellious ways.

He is not easy to hurt but he does have a sensitive side. He has a strong mind and can see the perspective of the person who has something to say, it’s more of does he care enough to bother. If you decide to marry an Aquarius man, make sure you have set boundaries and clear what is acceptable and non-negotiables first.

The Aquarius husband is not so much of a family man

It’s best not to expect him to be at home anyway. The Aquarius husband makes a great partner and friend but he’s not big on attachments even if it is from his own bloodline. He’s a universal man, he loves not only one but everyone. For him, everyone is equal in his eyes.

When you marry an Aquarius man, he is a husband but also a best friend. Marriage to him means a bond that thrives and seeks to last for life. He shows his love by providing for you and surprising you with things that he knows you would like.

He is not a verbal supporter but instead shows up when he doesn’t have to. He will go out of his way to be by your side when you need him but he will also kind of pleasure himself into teasing you and playing pranks if he feels like it.

The Aquarius husband does not appreciate a needy wife

Actually, an Aquarius friend’s exact word to describe it is lame. He would understand someone who is dealing with a broken heart but he simply can’t empathize because he thinks logically. Emotional demands are too much for him.

He would find it difficult to be a shoulder to cry on. For him, nothing is permanent, everything changes. You need to be able to be your own person because no one can do that for you. His ideal partner is someone who is independent enough not to rely on someone for their emotional needs.

That is the reason why Aries can be a good partner to him because they normally do not seek a lot of time with their partners and they like to keep busy in their career ambitions. They may also enjoy Gemini’s company since they can kind of entertain themselves.

The Aquarius husband is a man of many talents and unique ideas. He thinks progressively and is ahead of most people. His fashion choices may even be questionable or it may reflect on the platform he spends his time with.

In college, he could have been someone that didn’t want to, yet still became a leader for some reason. He is a trendsetter. He is able to collate the concerns of a group and be able to understand what they really want. He isn’t sentimental but he is future-forward.

Even during a breakup, the Aquarius man may feel sad about it, but he understands relationships come and go. Not even marriage will make it any more special. He is the type to move on and cannot stay in one place. He is restless and he has so much to offer just to dedicate himself to a life of domestic bliss.

Marriage to an Aquarius man, in a nutshell…

The Aquarius man in marriage is like having a best friend forever. Do not expect romantic dates and experiences. He is wild and he likes to have adventurous sessions with his wife. He is detached and it’s not easy for him to relate emotionally.

He makes for a logical husband. He might be busy in his career and there might be a time he has to be far away. The Aquarius husband has a life outside of the marriage and you can consider him one of the last choices for traditional marriage.

You would need to have an open mind if you want to make a marriage last with an Aquarius husband. He is the type to either live a bachelor lifestyle or to have a polygamous setup. He needs his freedom and a clingy wife turns him off. He wants to have a partner that is independent of his presence.

Though he does make a good provider and can think of unique surprises to keep the partner happy. It’s just that if you’re looking for someone who would take care of your heart like how you see in films, he is just not that man. He is too ambitious, humanitarian, and forward-thinking to be obsessed with romance. 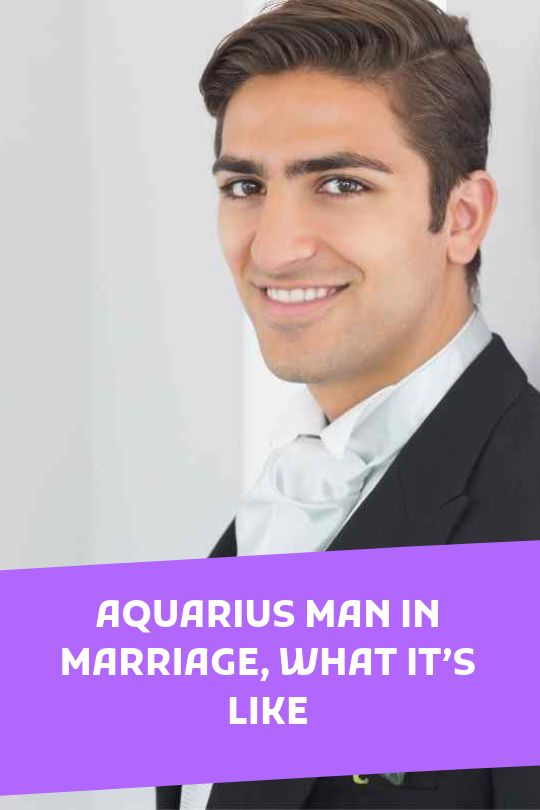