Intense and impatient are some words that greatly describe an Aries man. Now, you laid eyes on one, and you just can’t get enough of him. If you were wondering how to make him commit, you have come to the right place! Here are some things to remember if you want to keep him forever.

To make an Aries man commit to you, do not put him in a cage. You don’t want to be a threat to his freedom. Be patient and compassionate. You need to be smart and show him that you can stimulate him mentally. Show him that you’re independent enough to live with or without him. Lastly, love his friends and family.

A lot is discussed in this whole article. If you want to know why your Aries man behaves like that and how he is when it comes to dating, continue reading! I have also provided complete details on the tips above. Let’s go!

Your Aries man is the very first Zodiac sign, and so, he is the youngest and the infant in the group. He rules the first house, which is an independent house where it is all about ourselves. He is ruled by Mars, which is the planet of adrenaline, so you can expect him to have a lot of energy.

He is symbolized by the ram which makes him a fighter. To get to know more about your Aries man, here are things you should know about him.

Sometimes, your Aries man does not care about things that have nothing to do with him. He does not want to talk about things that do not directly affect him. When in an argument, he always wants to have the last word. He can be so wrong but could not admit it.

All he cares about is getting whatever it is that he wants. Sometimes, he does not know how to be anyone else. However, this trait can also catapult him to achieving his goals. Being confident about what you do allows you to do things on your own and be independent of the work you are doing.

Your Aries man is born an initiator. He likes being the leader of things he wants to do. He is very big in initiating things because his quality is cardinal. However, most of the time, your Aries man rarely ever finishes things. He can be ridiculously slow with the things he does. On the bright side, because of the nature of an Aries man, he can be someone whom you can get ideas from. He has a lot of it, so, expect him to be very helpful.

Your Aries man is also very competitive. The God of War’s ability to strategize has been passed on to your Aries man, and he is always up for the challenge. With that, he can be very competitive – sometimes healthy, but most of the time, the other way around. He enjoys competition, maybe even with his romantic partner.

Now that you know how an Aries man behaves, you can conclude that he can be a little aggressive and intense. He is also like that when it comes to love and dating. When he sets his eyes on a love interest, he is going to go hard to get her.

He thinks of it as a battlefield and something that he needs to conquer. He loves the chase, and so, you can expect him to chase you until he gets your heart. Despite this trait, he can also be sweet and kind.

When you are already dating an Aries man, look forward to a lot of adventures and exciting things to come. Remember when I said that he has a lot of energy? Because of this, he is going to plan out activities that will surely get you on your feet and make you feel an adrenaline rush.

He keeps his relationships very exciting. He likes to keep it fresh, and he might want to argue about things that sometimes do not make sense. Know that this is his way to keep things exciting.

5 Ways To Make An Aries Man Commit To You

Do not put him in a cage

As I have repeatedly said early in this article, your Aries man is very adventurous and likes to do different things that will continuously excite him. The last thing you want to do is to put him in a cage and take away his freedom. You do not want to do that ever! This will just make your Aries man do the things you are prohibiting him to do.

With this being said, you need to realize that your Aries man does not like it if you are being too clingy. If he asks your permission that he’s going out and have fun with the guys, let him. Being with an Aries man, you need to know that you should have a lot of trust in the relationship to make him commit.

Be patient and compassionate

Your Aries man has probably the hottest head in all the zodiac men. He is very hot-tempered and has a very short temper. Although he is like this. He can also be very kind and gentle, especially to someone he loves. So, what he wants his lover to be is someone gentle and sweet and has the ability to calm him down.

With all the hustle and bustle he does all day, he wants to come home to someone who can make him feel that he is at peace. If he has been having a bad day, let him know that you are there for him. With this, he is going to want to be with you forever.

Because your Aries man is very smart, it only makes sense that he is going to want to be with someone who is the same. He does not like it if his partner comes off as naïve.

He wants to be with someone who challenges him intellectually. If you think you are not smart enough for him, it’s time to read some books and find out the things that you are very interested in.

You can playfully fight with him with mental games like scribbles and chess. Show him that you can be at his mental level. You can also tell him nerdy jokes that he might find funny. He is going to commit to a man or a woman that he finds mentally stimulating.

If you are living with your Aries man already, you might have noticed how he is always out and about. He is doing his own thing and being with people that he considers his tribe. You cannot expect that he is going to be with you to do the chores.

To make him want to commit, you need to show him that you are independent enough to live on your own.

Love his friends and family

Sometimes, an Aries man cannot be a committed lover. He might be jumping from relationship to relationship. However, despite this unpopular trait of his, he can be very loyal to his friends and family. So, in order to make him commit, you need to make sure that you get along with these people just fine.

Be very cautious and caring to his friends and family. You need to be able to impress them, and by doing this, you can make an Aries man want to commit.

5 ways to make an Aries man commit to you, final thoughts…

To make an Aries man commit to you: 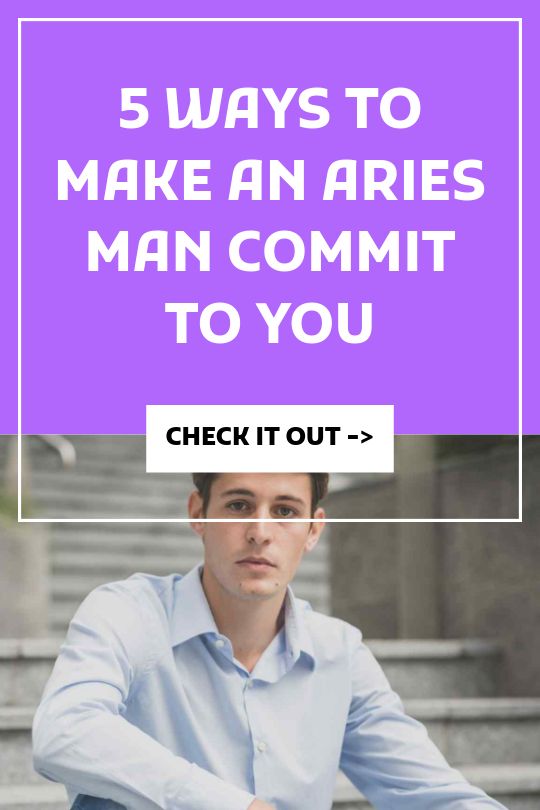