If you are a Virgo woman seeking some advice on marriage to (or a long-term relationship with)  an Aries man, please check the article, “Aries man and Virgo woman in marriage” because it’s specifically written for you!

The Virgo woman is slow and steady, a planner and an overthinker and then you have someone who is brash, who jumps first without thinking, which is what the Aries man would probably be.

The Virgo woman and Aries man in marriage is like tossing a coin, not knowing if it’s heads or tails. They make a great romantic plot for a novel. Many times, the Virgo woman wishes she never met him but she can’t help but come back to him.

The Virgo woman inspires the Aries man to be a better version of himself. She allows him to pursue his dreams. She is independent and can take of herself. She is so good at managing things she even takes the burden from others. Her whole personality is all about making herself useful to others.

If there’s a pet peeve the Virgo woman has, it’s feeling like she was not productive. It’s difficult for her to relax and not feel bad about it. At times, she can feel misunderstood when her intention is always from a place of love. She is persistent and the Aries man appreciates that quality about her.

There are always two types of Virgos. One that can’t help but nag the people close to her and the other that is quiet but silently judging, she is actually just trying to be polite. Both the Aries man and Virgo woman are restless people. The Virgo woman shows tenacity and the Aries man shows strength.

They have a mutual realistic point of view when it comes to their goals. The Aries man is truly lucky because a Virgo woman is supportive of him. The Aries man can be so focused on himself while she is selfless, often putting the needs of others first.

If anything, the Aries man can teach the Virgo woman to be more loving towards herself. To put herself first, to teach her to chase her happiness and not to miss the present moment. The Virgo woman is a worrier, often thinking of what will happen in the future.

This is a relationship of equals. The Virgo woman lives her life through serving others and the Aries man puts himself first because he knows he is either his own best friend or enemy. Both may benefit in giving one another space from time to time.

For more details, read “Dating a Virgo Woman? 12 Things You Must Know”

The sexuality between the Virgo woman and Aries man is not always full of bliss. Sometimes the Virgo woman may be lost in worrying that she won’t be in the mood for such acts. Though, there are times when she feels like it, the Aries man will be on to a surprise.

The thing is, they are the polarity of Pisces, that sign is usually a nymphomaniac. The Virgo is then capable of the same hedonistic habit but it takes something to convince them to show it. She needs to feel comfortable before she becomes vulnerable. The Virgo woman must learn over time not to be so perfect and just be herself at times.

For more details, read… “Virgo Woman In Bed, 7 Steamy Tips To Turn Her On”

As friends, it’s not difficult to imagine the Virgo woman stressed about the Aries man. Since they are polar energies, Aries as masculine and Virgo as feminine, they can balance one another if one doesn’t shadow the other.

Their friendship survives when they apply a mentality of agreeing to disagree. Yes, we can all get along even without resonating with what the other likes or believe in. They both have a sense of humor that they like. In fact, the Aries would be the one talking more and the Virgo is most likely to be the one patiently listening.

Since the two are polarities, the Virgo woman and Aries man can make or break it. It’s truly up to them. Sometimes it can be about how mature both signs are. There might be a lot of arguments ahead. So, compromise is a must.

The Aries man will realize that the Virgo woman takes time to fall in love. She is an earth sign, and out of everyone in the zodiac wheel, she is one of those that loves until the end of time. She wants to make sure the man she will be with is someone worth sacrificing herself to.

The Virgo woman is afraid to be attached to someone who will just treat her like a doormat. She is in a position where many can take advantage of her because of her helpful nature. Not everyone also appreciates the help she does because there are some Virgo women out there that nag at the same time.

She might as well be introverted as she is reserved. She is practical, therefore love is something that she will consider if the actions of the other person show that he’s serious. Another issue here is the Virgo woman’s tendency to fix him. Imagine doing that to the Aries man, who has pride of his own and very masculine in energy.

In reality, the Aries man has a childish side to him so he won’t always take things too seriously to the frustration of the Virgo woman. He is also the type to fall and crash in love. He’s into the thrill and excitement, but that’s not to say that Aries man is not faithful. He is in fact, capable of great devotion.

Does a Virgo woman and Aries man work, is it a good combination?

The Virgo woman and Aries man is a moderate combination. They need adjustments on both ends. The Virgo woman is earthly and wants to prepare for the future, to make sure it’s bright. The Aries man is someone who lives in the present and may sometimes be impulsive in his decisions. The key is to make sure they meet halfway, to take note of one another’s needs in order to last.

Marriage between a Virgo woman and Aries man, In summary…

The Virgo woman and Aries man in marriage have compatibility but things won’t always go smoothly. Even though the two of them are looking forward to a long-lasting commitment, their downfall will be about not being able to see eye to eye.

The Virgo woman needs to put herself first. She is so focused on serving others that she notices everything. Some Virgo women may even nag and it may frustrate the Aries man who thinks she thinks everything he does is wrong. He is masculine after all, so she might have her ways that make him feel like less of a man.

The pair can be extensively loyal. If the Aries man has locked the Virgo woman as the one he wants to marry for life, then he can move mountains just to meet the kind of man she needs him to be. The reward is a trustworthy, tenacious, and loyal wife who will support his dreams and vision. Someone who chooses to stay with him even when times get tough. 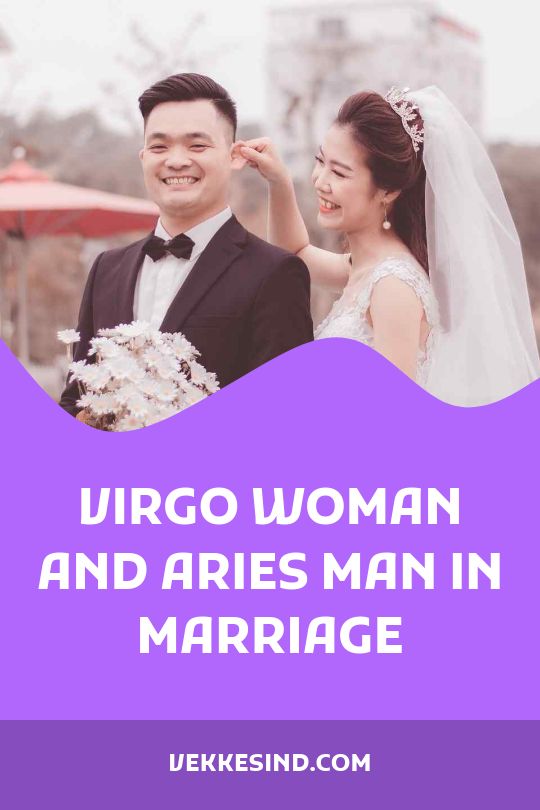